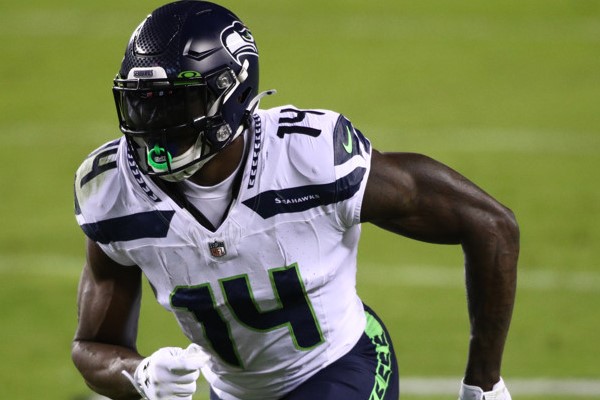 Week 6
Metcalf has clearly become the favorite target for Geno Smith as he paced the team in receiving in week 6. Metcalf saw a team high 6 targets converting them for 6-58 on the week. The drop-off from Russell Wilson to Smith has lowered the ceiling and floors for all the Seahawks players, but it is clear that Metcalf will still have value. This week Metcalf will most likely see shadow coverage from Saints top CB Marshon Lattimore. Lattimore hasn’t been elite this season as outside WRs Kendrick Bourne (6-96-1) and Kenny Golladay (6-116-1) have found success vs. the Saints. Metcalf is still a start but he is more of a WR2 this week instead of his usual borderline WR1.
Week 5
The loss of Russell Wilson will be felt by Metcalf, but early signs point to Geno Smith locking in on his stud #1 WR. Metcalf secured 3-54-1 in just 1 quarter vs. the Rams with Smith at QB. This should ease the mind of some fantasy managers as it looks like Smith has a solid command of the offense. This could even potentially open up a buying window for Metcalf if fantasy managers are nervous because of the loss of Wilson.
This week the Seahawks face the Steelers, who just allowed big performances Tim Patrick (7-89) and Courtland Sutton (7-120-1) on the outside. The Steelers this season have struggled vs. WRs, allowing the 6th most points to the position on the season. Even with Smith running the show, fantasy managers should start Metcalf with confidence in Week 6.
Week 4
Playing with a lead from the middle of the 2nd quarter on, Russell Wilson threw just 23 passes, resulting in easily the team’s least productive passing game of the season. Fortunately, Metcalf easily led the team with 8 targets. But without the deep strikes that often lead to big yardage, he was mostly used on short-to-intermediate targets, and the TD he scored bailed out his fantasy day.

With Seattle running an average of 54 plays per game, the volume of plays has resulted in him averaging 8 targets per game, which is good, but far from the totals he needs to see to have consistent, elite production. Also, he’s being used less than he was last year on deep passes, as many opponents are dropping two safeties deep to contain him. And as a result, he’s posted 65 yards or fewer in all but 1 game.
Week 2
Metcalf had a quiet day in this one as he took a backseat to Tyler Lockett (8-178-1) and Freddie Swain (5-95-1) from a production standpoint. Metcalf’s usage was still elite, seeing 11 targets and running a route on 35 of 37 Wilson drop-backs. Metcalf’s role has changed slightly as his ADOT has dropped from 13.9 in 2020 to 8.8 in Week 2. This has led to Metcalf only catching 1 pass of 20 or more yards so far this season.
In Week 3 Metcalf will face off vs. his old foe Patrick Peterson, who held down Metcalf a few times during their division matchups with the Cardinals. Metcalf is still a start in season-long, but he could be someone to fade in DFS if it looks like he will be shadowed by Peterson.
Week 1
D.K. Metcalf and Tyler Lockett remain the 1a and 1b in this offense and it is not close. The best part about this duo is they can each put up fantasy points in the same week as they are the clear focal points. On a day that Russell Wilson only threw the ball 23 times, both Lockett and Metcalf got it done. Both players finished with at least 14 fantasy points in half PPR and secured at least 60 yards and a score on the week. Lockett led the way, exploding for 100 yards and 2 TDs. Metcalf did lead the team in routes and ran a route on every Wilson drop back.
This week the Seahawks will play the Titans, who just allowed the second most points to WRs in Week 1 with the Cardinals WRs scoring 57 fantasy points. This matchup makes both D.K. Metcalf and Tyler Lockett must-start players and DFS plays in Week 2.

He’s in a new offense under OC Shane Waldron this season but has the same QB and should be in for similar volume. Unless Russell Wilson’s 2nd-half swoon was a sign of things to come this year, Metcalf has a good shot at another WR1 finish.

Seahawks WR D.K. Metcalf (foot) is not listed on the final injury report. He was limited on Wednesday, sidelined on Thursday and then limited again on Friday. Metcalf should be ready to play his usual role in Sunday night's game vs. the Steelers.

Seahawks WR D.K. Metcalf (foot) did not practice on Thursday. He's been on the injury report with this foot since Week 4 but had put in 6 straight limited practices. It's unclear if he suffered a setback or just got Thursday off. We should learn more tomorrow.

Seahawks WR D.K. Metcalf (foot) isn’t listed on the final injury report. He popped up as a limited participant on Thursday and was limited again on Friday -- but he’s evidently fine for this weekend’s game vs. the 49ers. Unless we hear otherwise, Metcalf is safe to get into Week 4 fantasy lineups.

Seahawks WR D.K. Metcalf was added to the injury report with a foot and limited in practice on Thursday. We don't have any other info on his status right now. Check back tomorrow for another update.

Seahawks expect even more from Metcalf

The Seahawks love what they got out of WR D.K. Metcalf as a rookie last year but believe he's capable of even more going forward. “The No. 1 thing that we know is that we can move him around and do different things with him," OC Brian Schottenheimer said. “He kind of got stuck at the ‘X’ receiver last year. This year we know we can move him around quite a bit more. There are so many more routes he can run. He’s proven he can get behind people. I just think the flexibility of moving him around and introducing some different route concepts that we can kind of get him up to speed on that will complement the things that he’s already put on film. It will be an incredible, incredible advantage for us as we head into next season.” Metcalf posted an impressive 58-900-7 line last season -- and then totaled 219 yards and a score on 11 catches in 2 playoff games. It's plenty possible that he overtakes Tyler Lockett as Seattle's top WR in 2020.