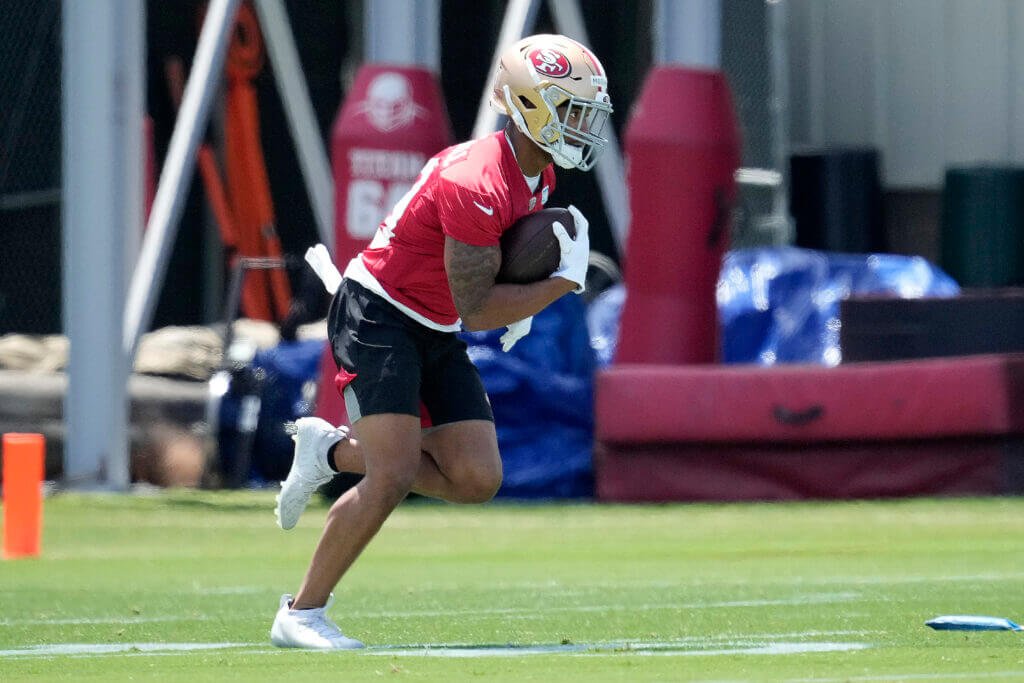 Week 13
Although Mitchell saw his typical workload, the Seattle defense came out fired up on their home field and didn’t give him much room to run. As usual, he hit the hole with power. He had the occasional opportunity to see just a single defender and force a missed tackle, but those chances were rare. He did convert a goal-line run to help his fantasy day with a TD. In addition, he caught each of his 3 targets. His 84% snap share relegated Jeff Wilson and Ja’Mycal Hasty to afterthoughts in the offense.

Mitchell was diagnosed with a concussion on Monday, though, so you’ll need to track his progress through the protocol. When healthy, it’s tough to see him as anything other than a strong RB1. After he caught just 4 passes over his first 5 games, he came into this game with 10 catches over his last 3. And that’s in addition to him having posted at least 91 rushing yards in 4 of his last 5 games while scoring in 3 of them. In addition, he came into this contest with 27 and 32 touches over his last 2, so the coaching staff is willing to commit to him. He has 3 great remaining matchups against the Bengals, Falcons and Texans along with a Week 16 matchup against Tennessee that ranks as tough but may not be overwhelming for the rookie.
Week 12
Playing in a game less than 2 weeks after suffering a broken finger, Mitchell took on a massive workload. But the most interesting thing was that the finger didn’t impact him as a receiver, and he caught 5 of 6 targets. He consistently blew through the Vikings defense for chunks of yardage, and he was instrumental in putting the game away by converting numerous 1st downs in the 4th quarter. Even though Deebo Samuel had 2 rushing TDs on 6 carries, Mitchell was able to get his lone TD late in the game.

When healthy, Mitchell will remain a must-start for fantasy. He’s handled 27 carries in each of his last 2 games, and he’s also posted at least 91 rushing yards in 4 of his last 5 games. In addition, though the usage hasn’t been consistent, he’s been targeted at least 5 times in 2 of his last 3 contests. He has an excellent remaining schedule with 4 of his next 5 games against defenses that are below average against the run.
Week 10
Mitchell toted it a whopping 27 times in Monday night’s game vs. the Rams. The 49ers raced out to a 14-0 lead in the 4th quarter and were able to lean on the run game the rest of the way.

L.A. kept Mitchell bottled up for the most part, but volume propelled Mitchell to 91 rushing yards. We did see RB Jeff Wilson mix in for 10 carries. And WR Deebo Samuel got 5 rush attempts. But Mitchell still handled a solid 61% of the team rush attempts. He played 53% of San Francisco’s offensive snaps.

Mitchell remains the clear lead back here. And game flow should work in his favor again in Week 11 with the 49ers 6.5-point favorites vs. the Jaguars. Week 12 brings a neutral matchup with the Vikings, followed by 3 straight plus draws vs. the Seahawks, Bengals and Falcons.
Week 9
Mitchell rushed 8 times for 36 yards in the 49ers' Week 9 loss to the Cardinals and added 5 catches for 43 yards.
Mitchell set a career high with 5 receptions and ripped off a few nice runs but wasn’t featured due to the 49ers falling behind 14-0 early in the 1st quarter.
Mitchell came in to the week as questionable with a ribs injury but looked like his explosive self whenever he touched the ball.
Mitchell should be viewed as an RB2 in Week 10’s matchup against the Rams.
Week 8
Mitchell reminded everyone on Sunday how special he can be both from a production standpoint and a volume standpoint. He saw 18 carries for the 2nd straight week, producing 137 yards and a TD. This was his 2nd straight game finding the end zone.

Going forward, Mitchell is the RB to own in San Francisco. Trey Sermon is not involved with this offense. JaMycal Hasty saw just 5 opportunities. As long as he can stay healthy, there is little reason to doubt the rookie rusher.
Week 7
Mitchell started out hot, as he gashed the Colts defense for 57 yards and a TD on the first drive of the game. But the 49ers had too many stalled drives to keep feeding him. In addition, once they fell behind in the 2nd half, the team used JaMycal Hasty as the passing-down back, which helped limit Mitchell to 18 rush attempts. After that first drive, he had just enough work to get him over 100 yards, though he wasn’t targeted a single time.

Based on a few games, it seems that Mitchell has emerged as the 49ers’ primary back, and he should continue to have weekly fantasy value. He’s proven to be an explosive runner who’s a good fit for the running scheme they use, and it wouldn’t be a surprise if he exploded in any given week. Of course his lack of passing-game usage limits his upside. But as long as he’s starting, he should be a RB2.
Week 5
Mitchell returned in this game and was given the keys to the backfield. He saw 9 carries for 43 yards. He also caught both of his targets for 19 yards. Trey Sermon saw just 1 touch in this game and it came late in the 4th quarter.

Going forward, Mitchell is clearly the guy assuming he's healthy. HC Kyle Shannahan likes his versatility and the Raheem Mostert comparisons have been thrown out by commentators and analysts alike.

This offense should find some continuity over the next few weeks. Assuming Mitchell sees the volume in games where they lean more on the run, he should remain a viable option the rest of the way.
Week 2
In Week 1, a 38-yard TD run probably inflated Mitchell’s performance beyond how we should have perceived it.

In Week 2, though, the lack of such a run probably made things look worse than they actually were.

First of all, Mitchell narrowly missed scoring for the 2nd straight game. He punched in a 1-yard TD early in the 4th quarter, but replay determined his knee hit the ground 1st. Jimmy Garoppolo vulture the TD with a sneak on the next play.

The biggest issue for Mitchell in Week 2 was how quickly he met Eagles defenders. The rookie back dipped from 1.63 yards before contact per attempt in the opener to just 0.47 in Week 2, according to Pro Football Focus. The latter number ranked just 53rd among all 74 RBs who logged a carry in Week 2.

The positive: Mitchell handled 70.8% of San Francisco’s HB carries, despite leaving briefly in the 2nd half with a shoulder issue. He also watched JaMycal Hasty go down with a high-ankle sprain and Trey Sermon suffer a concussion (on his only touch).

So don’t fret if you paid up for Mitchell on waivers and then didn’t get much immediate return. He’s the lead back in what has ranked among the league’s most successful rushing attacks in recent years.

Mitchell will likely hit the next 3 weeks in fantasy starter territory, ahead of the Week 6 bye.
Week 1
With Trey Sermon inactive as a healthy scratch, once Raheem Mostert left the game in the 1st quarter with a knee injury, the 49ers’ rookie took full advantage of his opportunity to flash his exceptional pro-day numbers at the expense of the Lions. Due to him consistently producing positive yardage on just about every run while helping the team roll out to a massive lead, he relegated JaMycal Hasty to just a single carry.

Mitchell has a skill set that can make him a league winner in the Kyle Shanahan run system. Actually, if he is simply given enough time to ‘steal’ the job, that may be enough. Not only did he run a 4.33 40-yard-dash, his explosiveness was 90th percentile, and his agility tested in the 62nd percentile. At 5’10, 200 pounds, he could get a reasonable workload, and regardless of how things shake out, he should be rostered in all fantasy leagues.

49ers RB Elijah Mitchell (knee) is active for today’s game vs. the Texans. It’ll be his first action since Week 13. A healthy Mitchell has been a workhorse this season, though. And HC Kyle Shanahan said Friday that they’ll “play Elijah as much as he can handle.” Check where Mitchell sits in the Week 17 RB Rankings.

49ers RB Elijah Mitchell (knee) is expected to play vs. the Texans today, according to ESPN's Adam Schefter. Mitchell has been out since Week 13 with a concussion and knee swelling but got in 3 limited practices this week. HC Kyle Shanahan said Friday that he'll "play Elijah as much as he can handle," while adding that he'll monitor that knee. He's not the safest fantasy play today but has 20-carry upside.

49ers RB Elijah Mitchell (knee) was limited in practice all week and is listed as questionable for this weekend’s game vs. the Texans. HC Kyle Shanahan sure made it sound like Mitchell will play, though. "We’ll play Elijah as much as he can handle, so that’s about watching him, watching how his legs work, communicating with him," Shanahan said Friday. Mitchell has averaged 18.3 carries across his 9 outings this season and could reach that number on Sunday if that knee holds up.

49ers RB Elijah Mitchell (knee) remained limited on Thursday. His status for this weekend's game vs. Houston is still uncertain. Check back tomorrow for another update.

49ers RB Elijah Mitchell (knee) got in a limited practice on Wednesday. It looks like he has a shot to return for this weekend's game vs. the Texans. We'll get another update on Mitchell tomorrow.