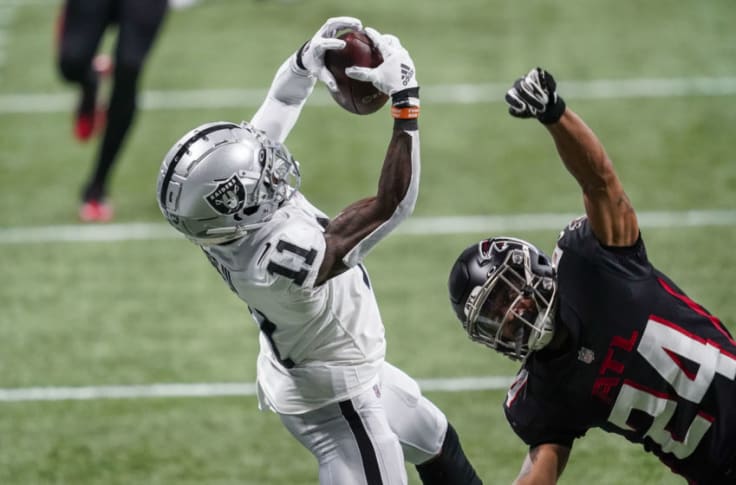 The Raiders released WR Henry Ruggs. Fantasy owners can do the same. Facing DUI causing death charges, Ruggs won't play again this season. And there's a real chance that his football career is over.

Ruggs to be charged with DUI resulting in death

Raiders WR Henry Ruggs will be charged with DUI resulting in death, the Las Vegas police announced in a statement. Ruggs reportedly rear-ended a vehicle early Tuesday morning. He remained on scene and "showed signs of impairment," per the statement, before being transported to a local hospital. Ruggs is expected to be ok, but the driver of the other vehicle passed away. We're still awaiting a statement from the Raiders, but Ruggs obviously won't play vs. the Giants this weekend and probably won't play again this season. DUI resulting in death is punishable by imprisonment for a minimum of 2 years and a maximum of 20 in Nevada.

TMZ reports that Raiders WR Henry Ruggs was involved in a serious car accident in Las Vegas early Tuesday morning. No word on Ruggs' condition, but the pictures of the accident look bad. Stay tuned for updates.

Update: A source tells TMZ that Ruggs is expected to be OK.

Speaking with the Raiders website Saturday, HC Jon Gruden had some high praise for 2nd-year WR Bryan Edwards: "He's got great ability. I'm excited about him. You see, he looks like T.O. He looks like one of the #1 wideouts in the league." Gruden then added that WR Henry Ruggs "is putting it together; I think his experience shows." It's one soundbite from an early-camp interview. But it sure sounds -- and looks from Gruden's expression -- as though last year's Round 3 WR is impressing him more than the 1st-rounder. Gruden went on to name Willie Snead and Hunter Renfrow as "crafty little slot guys" and said he's "really excited" about TE Foster Moreau. We'll keep our eyes on the progression of this offense, which presents wide-open opportunity for roles behind lead target Darren Waller.

Raiders WR Henry Ruggs said during his Wednesday press conference that he packed on 13 pounds this offseason. “It was my focus. It’s a man’s game now and I’m not the biggest guy, but I have to get to where I can compete with grown men now,” Ruggs said. “So that was one of my biggest things that I hammered on was getting bigger, eating all the time, and just hammering down in the weight room. And people [have been] saying I look noticeably bigger, so I guess it’s paying off.” We've seen some speed guys in the past try to add weight and lose some of the speed that set them apart, so we'll be interested to see Ruggs in action. The 2nd-year wideout seems mindful of that. “Even in the weight room, you work on different things, but when you’re gaining weight, you still have to do the little-guy things that I’m known for,” Ruggs said. “So, still hammered on those things and just got better in the things that I needed to work on.” Ruggs remains outside the top 50 WRs in ADP, so there's little risk in betting he can step into Vegas' top role.

Henry Ruggs, WR UNS There is no dynasty data for this player.