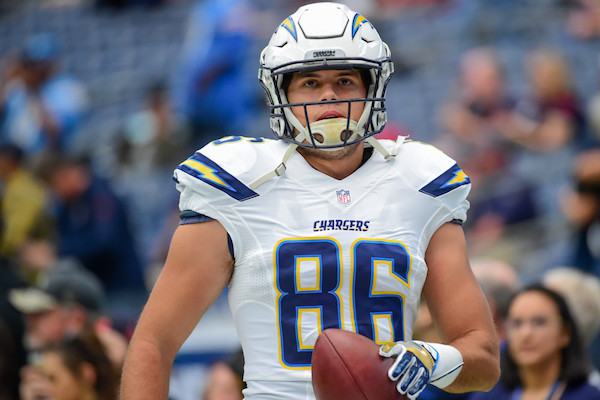 -Henry posted only 4 top-10 fantasy weeks, with the first not arriving until Week 10. Overall, he ranked as the PPR TE12.

-Henry missed the final 2 games of the season on the COVID-19 list.

-One day after the Pats signed Jonnu Smith, they inked Henry to a 3-year deal worth $37.4 million. Both deals are worth an average of ~$12.5 million per season.

-Jonnu’s presence certainly caps the upside of Henry, who’s the superior blocker and should have a bigger role in that area.

-The Pats retained Cam Newton on a 1-year deal and added Mac Jones in Round 1 of the 2021 draft. Newton looked like a shell of himself in 2020, but we expect him to at least enter Week 1 as the starter.

-Jones started only 1 season at Alabama, but he showed pro-level accuracy on tape.

-Only 6% of Newton’s targets went to TEs in 2020 — lowest in the NFL. There’s no doubt that’ll change massively in ’21. While the Pats added WRs Nelson Agholor and Kendrick Bourne to pair with Jakobi Meyers, the strength of this offense now lies at TE.

-What figures to remain is the Pats’ run-heavy game plan. With a restocked defense and a well-built O-line, look for another low-volume pass attack.

Coming off a pedestrian season alongside Justin Herbert, Henry heads to New England to form a 1-2 punch with Jonnu Smith.

Only 26, Henry will likely need to pop as a scorer to pay off in fantasy. Smith’s superior playmaking ability figures to put him ahead for targets. Mix in QB and volume concerns and Henry quickly fades as a TE1 priority.

Not done yet: Patriots add Henry

After signing TE Jonnu Smith, WR Nelson Agholor and WR Kendrick Bourne on the 1st day of free agency, the Patriots kicked off Day 2 by inking TE Hunter Henry to a 3-year, $37.5 million deal with $25 million guaranteed, according to ESPN's Adam Schefter. Henry's $12.5 million average annual salary is identical to Jonnu Smith's -- although Smith got a 4-year deal. New England suddenly has the league's top TE tandem after trotting out a completely unforgettable group last year. The easy comparison here will be to Rob Gronkowski and Aaron Hernandez, who were both top 14 PPR TEs in 2010 and top 3 in 2011. That, of course, came with Tom Brady slinging the rock. Last year's Patriots ranked 31st in pass rate, 31st in pass attempts and 30th in pass yards. HC Bill Belichick is clearly gearing up to chuck it more in 2021, but it's tough to imagine there being enough to go around for both Henry and Smith to post TE1 numbers.

No tag for Henry

The Chargers have informed TE Hunter Henry that they won't be using the franchise tag on him, according to ESPN's Adam Schefter. That means Henry will hit the open market later this month. It also leaves Donald Parham as the apparent lead TE for the moment. Parham is a 6'8, 240-pounder with above-average athleticism. He delivered a 99th-percentile dominator rating in college and won't turn 24 until August. Parham contributed just 10 catches last season after arriving from the XFL but presents intriguing upside vs. a current ADP that places him outside the top 40 TEs in best-ball drafting. We'll see where Henry lands in what should be a loaded TE market.

Henry out for Week 17

Chargers TE Hunter Henry (COVID) is out for Sunday’s game vs. the Chiefs. TE Donald Parham ran a route on 72% of pass plays last week, catching 2 of 3 targets for 47 yards. He’s an intriguing Week 17 flier.

Chargers TE Hunter Henry has been placed on the COVID list. He's out for Sunday's game against the Broncos; we'll see about Week 17. Henry's absence leaves Donald Parham as Los Angeles' lead TE -- but he'd be a desperation fantasy play. Downgrade QB Justin Herbert a bit with Henry out.

The Chargers have placed the franchise tag on TE Hunter Henry, according to NFL Network's Ian Rapoport. That keeps Henry with the team for at least 2020. He's struggled with injuries, missing all of the 2018 regular season with a torn right ACL and 4 games with a tibia plateau fracture to his left knee this past year. But Henry finished 16th among TEs in PPR points per game as a rookie in 2016, 7th in 2017 and 9th in 2019. He's still just 25 -- and the Chargers obviously remain high on him. The concern for his 2020 fantasy prospects is who will be under center for the Chargers.