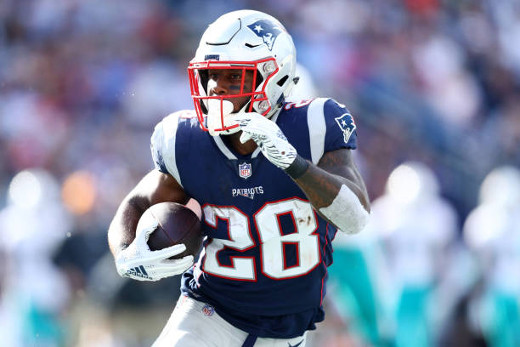 -White handled a strong 14.7% target share. But he was hurt by a run-heavy Pats offense with Cam Newton. The team totaled only 440 pass attempts.

-White remained a limited ball-carrier, though. He never topped 5 rush attempts in a game.

-White re-signed with the Patriots in March to a 1-year, $2.5 million deal.

-The Pats spent the 15th overall pick on Alabama QB Mac Jones. He’d project as an instant passing upgrade for this unit, but we expect Newton to open the year under center.

-New England bolstered the pass catching corps with Jonnu Smith, Hunter Henry, Nelson Agholor and Kendrick Bourne. They added Oklahoma RB Rhomondre Stevenson in Round 4 of the ’21 draft, but he’s not a threat to White’s pass catching role.

White was dragged down by a poor Patriots offense in 2020. Year 1 without Tom Brady turned up only 5 games with double-digit PPR points. He finished outside the top-40 in PPR points per game.

Even if he bounces back slightly, there’s no ceiling to chase here.

White expected back with Pats

RB James White is expected to re-sign with the Patriots, ESPN's Jeremy Fowler reports. We'll see what the contract looks like, but it seems like White was met with a cool market. The 29-year-old caught just 35 balls last year -- his fewest since 2015 -- in his first season without QB Tom Brady. White should remain New England's lead pass-catching back in 2021, but a run-heavy offense under QB Cam Newton would make it tough to White to find enough volume to be a real fantasy factor.

White back with the team

Patriots RB James White practiced on Wednesday. He's missed the past 2 games after his parents were in an accident, killing his father and leaving his mother in critical condition. White will presumably play against the Chiefs this weekend. His return takes a bite out of RB Rex Burkhead's appeal.

White out for Week 3

Patriots RB James White is out for Sunday’s game against the Raiders as he continues to grieve the death of his father last weekend. With White out last week, RB Rex Burkhead played 71% of New England’s offensive snaps and tallied 6 carries and 6 targets. The Patriots’ game plan might be completely different this Sunday, but Burkhead is at least a RB3 or flex consideration in PPR leagues.

Patriots RB James White is a surprise healthy scratch for tonight's game against the Seahawks. Andy Slater of Fox Sports 640 in South Florida reports that White's father was killed today in a car crash that also has left his mother in critical condition. White's absence from the lineup will leave opportunities for Rex Burkhead and rookie J.J. Taylor.

Patriots RB James White (toe) is active for tonight’s game against the Ravens. He was added to the injury report on Friday, but the toe injury is reportedly very minor. White is safe to get into fantasy lineups if you waited on him.