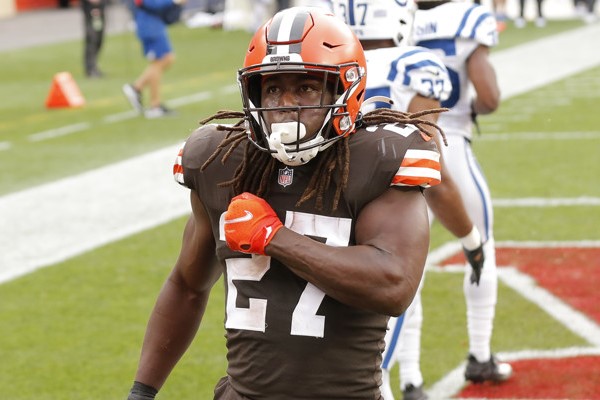 Hunt has hit double-digit carries in all 4 games this season. The Chargers enter as a favorable matchup for enemy RBs.

There’s been much more change to the perception of Hunt than the reality of his production, if you compare this year’s ADPs with last season. At his Round 5-6 price in 2021 drafts, Hunt needed a Nick Chubb injury to keep him from disappointing. He got that, but lost more time to his own injuries. Fantasy drafters might be overreacting to that and/or Hunt’s potentially uncertain contract status. Even if the Browns unload Hunt this summer, we’d bet on him landing in a situation with work available. And he’s a high-upside talent in any backfield.

Browns RB Nick Chubb ran for 118 yards and a TD on 19 carries in Sunday's narrow loss to the Falcons. It marked Chubb's 3rd game of more than 100 yards already this season. He added 9 yards on 2 catches among 3 targets. RB Kareem Hunt tallied just 2 catches (for 19 yards) on 3 targets as well, adding 49 yards on 10 rushes. Home dates with the Chargers and Patriots lie ahead the next 2 weeks.

Trio of scores for Chubb

Browns RB Nick Chubb matched a career high with 3 rushing scores in a Week 2 loss to the Jets. He out-carried Kareem Hunt 17-13 in a game that saw Cleveland play most of its snaps with a lead. Chubb even had a 33-yarder called back by holding. As the cherry on top, the veteran added 3 catches, a total he never exceeded last season. Cleveland now has a quick turnaround with a Thursday night game vs. Pittsburgh.

Browns RB Nick Chubb racked up 141 yards on 22 carries in Sunday's win at Carolina, but RB Kareem Hunt got both of the team's TDs. Hunt scored from 24 yards out on the ground, among 11 rushes for 46 yards. He added a 1-yard TD reception amid 4 catches for 24 yards. Hunt checked in 2nd on the team in receptions and yards. WR Donovan Peoples-Jones was the only other Brown to crack 20 receiving yards.

Hunt back in team drills

Browns RB Kareem Hunt returned to team drills Sunday, according to multiple reports. That followed closely behind reports of a “hold-in” and trade request for Hunt. It sounds like the RB has done what he can in pursuit of the extension and will now get back to business as usual. Hunt doesn’t have much leverage in trying to force the new contract

Browns RB Kareem Hunt has requested a trade, according to insider Mary Kay Cabot, but the team has already told him it won't happen. That could change, of course, especially if Hunt threatens to sit out regular-season games. We'll see where this goes. A move out of Cleveland would almost certainly help Hunt's fantasy value. It'd also be a boost for RB Nick Chubb and turn RB D'Ernest Johnson into a nice pick in the double-digit rounds of fantasy drafts.

There have been rumors of Hunt as a trade or cut candidate in the final year of his Cleveland contract, but he remains with the team as of now. Sharing a backfield with Nick Chubb obviously lowers Hunt's ceiling, and he'll be heading toward his age-28 season when he hits the open market next spring. Hunt hasn't reached 200 carries in a season since his rookie campaign, though, and might have more tread remaining than the typical age-28 back. He looks like a solid hold for now.