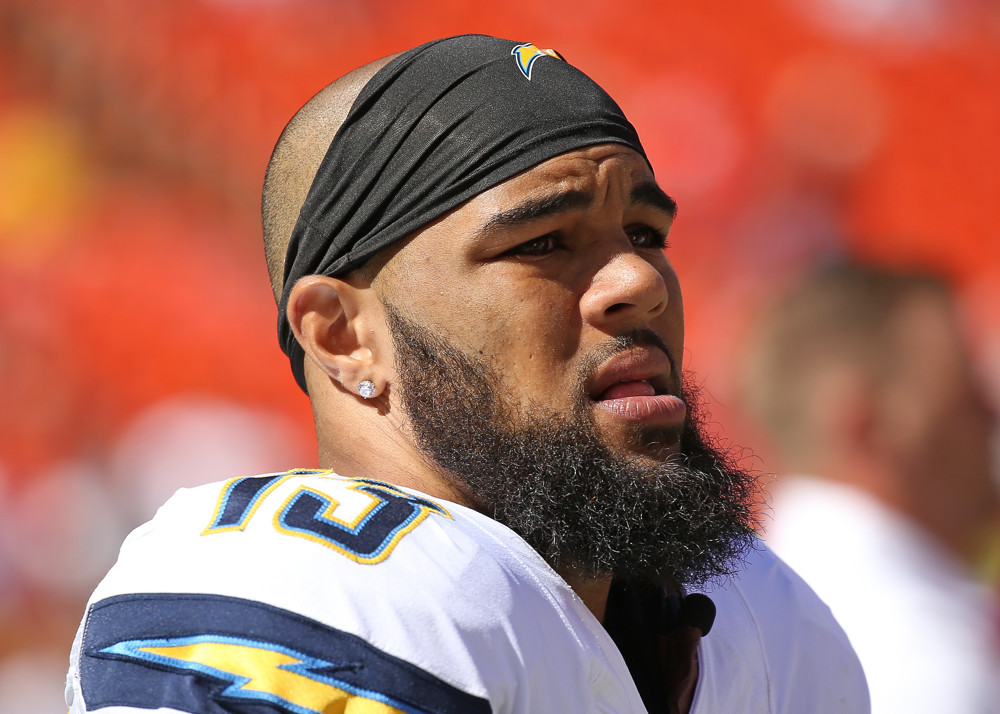 Week 13
Allen posted only 34 yards against the Bengals, but he made them count with 2 TDs. Both came inside the 10, with 1 surfacing on 4th down. His 8 targets still led the team on a day that saw Justin Herbert threw for 317 yards on 35 attempts. Allen has now hit 15 PPR points in 6 straight outings. He should continue to roll Sunday against a shaky Giants squad.
Week 11
Allen was a focal point throughout the game for the Chargers who were facing a depleted Steelers secondary missing Minkah Fitzpatrick and Joe Haden. Allen doesn’t receive much attention from Justin Herbert near the end zone, but he was peppered with targets as the Chargers moved the ball up and down the field all game long on Sunday Night Football. He led the team in targets, receptions, and receiving yards. Allen had a massive 31.7% target share on the night and finished with 9 catches (on 13 targets) for 112 yards. Allen now has 11 or more targets in 4 straight games and has incredible chemistry with Justin Herbert. He will continue to be featured in this high-powered Chargers offense. Allen is ranked as our WR6 this week against the Broncos. Broncos DBs have given up multiple TDs to opposing WRs in both of their last 2 games. The next three games on the schedule for the Chargers are @DEN, @CIN, and NYG.
Week 10
Allen continued to benefit from the Chargers’ coaching staff abandoning the downfield passing attack for the 3rd time in the last 4 games. As a result, Allen was the only Charger with more than 6 targets (he had 11). And even though Justin Herbert threw for just 195 yards, Allen accounted for more than half of that total. It also helped that he was facing a Minnesota zone defense that keeps WRs in front of them, and they leave openings in the middle of the field while keeping big plays to a minimum, which is perfect for Allen’s skillset.

He’ll likely continue to see plenty of targets, which will give him one of the better scoring floors a WR can have, especially in PPR leagues. That’s evidenced by him having seen at least 11 targets in 5 of his first 8 games. But despite the targets, the upside hasn’t been great, as last week was his first game with more than 77 yards since Week 2, and it was his first game with more than 6 catches in any of his last 4 contests. In terms of his remaining schedule, he mostly faces opponents in the middle of the league against WRs.
Week 9
Allen’s 12-104 receiving line in Sunday’s win over the Eagles might look like an outlier in a favorable matchup if you compare it to his other recent games. Really, though, we think it’s more of a correction.

We obviously don’t expect Allen to reach either of those numbers on a weekly basis, but there was nothing outlandish about his production. His 13 targets led the team by 8, but it marked the 5th time in 8 games Allen has garnered 11+ looks. His 12 receptions marked a season high, but his 8.7 yards per catch checked in well below his season average -- or any season of his career, actually.

Allen narrowly missed scoring on the Chargers’ opening drive, when Philly defenders stopped him short of the goal line on a 1-yard reception.

Overall, it was an encouraging game for both the veteran wideout and his 2nd-year QB, who was coming off consecutive rough outings.

With his bye already past, Allen could be a key member of championship lineups in PPR leagues.
Week 8
Allen finally found the end zone again in Week 8, securing 6-77-1. This was his first TD since Week 3 and only his second TD on the year. Allen is due for positive regression in the TD category as his 2 TDs on 69 targets is well below league average. Even without the TDs, Allen continues to have a great role on the offense. Allen’s 10 targets and 69 on the year puts him inside the top 10 with him playing 1 less game than most players at the top of the leaderboard.
Moving froward, Allen is an auto-start as his targets make his floor extremely high. This week Allen does have a below average matchup vs. a solid Eagles secondary.
Week 6
With the Chargers trailing for the majority of this game, it appeared to be a get-right spot for Allen, who hasn’t had a massive performance this season. But the Ravens defense with their pressure schemes had Justin Herbert out of sorts the entire afternoon, and Allen saw an incredibly low 5 targets, the same number that Mike Williams saw while playing just 36% of the snaps to 91% for Allen. It also didn’t help that Baltimore was getting very physical with the WRs, which seemed to keep Allen from quickly getting out of his breaks. Combined with the duress Herbert was under, it was a forgettable fantasy day for Allen.

The good news is that Allen’s hovered right around 10 targets each game, giving him a very strong weekly PPR floor. However, fantasy managers were likely expecting closer to WR1 production when selecting him on draft day. The emergence of Mike Williams, who’s been used in high-leverage situations, has lowered Allen’s once enormous upside. With Williams as the established alpha WR this year, it looks as if Allen’s role will remain static, meaning he’ll be very solid but often unspectacular for fantasy.
Week 5
Through the first 5 weeks of the season, it looks like Allen has taken a backseat to Mike Williams. Even though the targets (51 to 48) and routes (207 to 187) still lean Allen, the production has pretty much all gone to Williams. Williams’ 471 yards and 6 TDs are way out-pacing Allen at 369 and 1. It might be possible that some regression is coming for both players as the production starts to mirror closer to the usage. This could make Allen a buy low. Allen still has a great floor in PPR formats as he caught 6-75 on 9 targets in Week 5.
The tide could turn as early as this week as the Ravens have allowed 49% of their WR production to the slot. This is roughly 13% higher than the league average, which could lead to a solid day for Allen. Currently sitting as the WR18 in PPR on the season, Allen should be viewed as a strong WR2 in Week 6.
Week 4
Allen caught 7 of 11 targets for just 36 yards in the Chargers' Week 4 win over the Raiders.
Allen has had a couple of slow weeks with the Chargers throwing him a lot of balls right by the line of scrimmage.
Herbert did miss Allen open down the field a couple of times and Allen uncharacteristically dropped 2 passes.
Allen is a borderline WR1 every week in this prolific offense.
Week 2
Allen is a dynamic, dangerous receiver. He had 4 catches in 8 targets for 108 yards vs. Dallas, including a 42-yard gain in the 3rd quarter. He has exceeded 100 yards in each of the 1st 2 games. A game at Kansas City on Sunday most likely means a high-powered passing game on each side. The Chiefs’ pass defense has played well this season, ranking 10th in yardage allowed. They’ll have to contend with both Allen and WR Mike Williams this week.
Week 1
In the new-look, Joe Lombardi offense, Allen picked up right where he left off before injuring his hamstring at the end of the 2020 season, and that was with a massive 13-target game. Although he hauled in 9 of those passes, he did commit an important drop that not only would have padded his yardage total, but it also led to the Chargers stalling out on what may have been a TD drive in a low-scoring game.

There’s not much to say here, other than to be excited that Allen, as one of the best route runners in the NFL, will continue to be heavily used in the passing attack in most games that he plays. Even though he’s not a big-play machine, he’ll continue to post decent yardage per catch with volume making him one of the highest floor players at WR. He’s one of the few players who’s almost matchup proof.

Back and hamstring injuries got in the way a bit, but Allen was awesome when on the field last year. His scoring averages in 12 healthy games would have ranked 4th among WRs in PPR points and 9th in non-PPR. That followed 3 healthy and super productive seasons that saw him rank top 13 across fantasy formats.

Allen is still just 29, playing with an ascending QB in Justin Herbert and might even get improved play-calling this year. He’s a safe fantasy bet with top 5 upside in PPR leagues.

Chargers WR Keenan Allen is officially active for tonight's game vs. the Chiefs. He should be back in his usual role after missing last week's game on the COVID list.

The Chargers have activated WR Keenan Allen off the COVID list. He missed Sunday's win over the Giants but should be ready for the Thursday night home date with the Chiefs. His return makes it tough to like Jalen Guyton or Josh Palmer as fantasy options.

Allen expected back for Week 15

Chargers HC Brandon Staley expects to get WR Keenan Allen back from the COVID list for Thursday night's game vs. the Chiefs, "barring a setback." We'll keep an eye on the situation. WRs Josh Palmer and Jalen Guyton played well in Allen's absence in the win over the Giants, but Allen's return would obviously be good news for QB Justin Herbert.

Allen out for Week 14

Chargers WR Keenan Allen (COVID) is out for Sunday's game vs. the Giants. We'll see if he can get cleared for Thursday night's showdown with the Chiefs. We're still waiting to see if close-contact Mike Williams will come off the COVID list on Saturday and play this weekend.

The Chargers on Monday placed WR Keenan Allen on the COVID list. The details aren't yet clear, so we'll see whether Allen has a shot to make it back ahead of Sunday's game against the Giants. Make sure you set alternate plans or Week 14, though.

Update: Allen is vaccinated, according to NFL Network's Taylor Bisciotti, so there's at least a chance that he's cleared by Sunday.