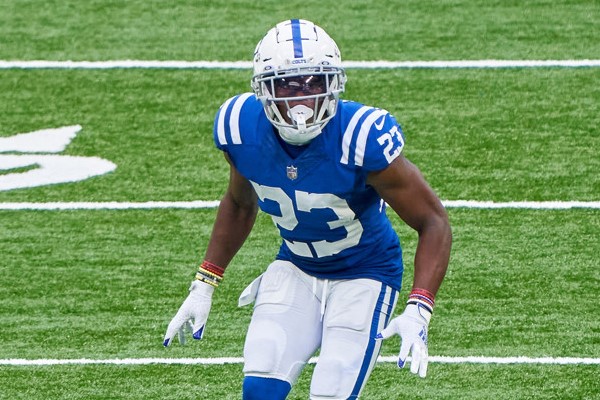 Moore took over as Indy's slot man back in 2018. His fantasy points per game have climbed in each season since. Moore has delivered the tackle production to set his floor. The 82 solos and 20 assists of last year set career highs, which leaves some room for regression, but each of the past 4 seasons has found him between 4.2 and 4.8 solos per contest.

Moore has added 11+ passes defensed in each season he has played more than 11 games. Each of those years also included at least 3 INTs.

Moore's position inside the Indy defense keeps him close to the action. He led all CBs in targets faced last season, according to Pro Football Focus, finishing 11th and 7th his other 2 full years. (That #7 finish in 2018 came despite missing a game.)

It's tough to bet on any CB finishing high, given the week-to-week and year-to-year volatility of a position so affected by big plays. But Moore looks like the "safest" pick at the spot and a trustworthy DB in general.

The Colts have ruled CB Kenny Moore (ankle) out for Sunday night's game against the Cowboys. That can only help the matchup for WR CeeDee Lamb, who was already an easy starter.

Colts EDGE Kwity Paye (ankle) put in a full practice Wednesday. That marks a big improvement after he missed all 3 days of practice last week, and then the game. Paye looks like he should be ready to face the Cowboys on Sunday night, though we'll watch him this week to confirm. CB Kenny Moore -- who left Monday night's game with a shin injury -- missed Wednesday's workout.

Colts CB Kenny Moore (finger) is active for today's game against the Commanders.

Colts CB Kenny Moore is questionable for Sunday's game against the Commanders after being added to Friday's injury report with a finger issue. We'll check his status Sunday. The team ruled EDGE Kwity Paye (ankle) out for the game.