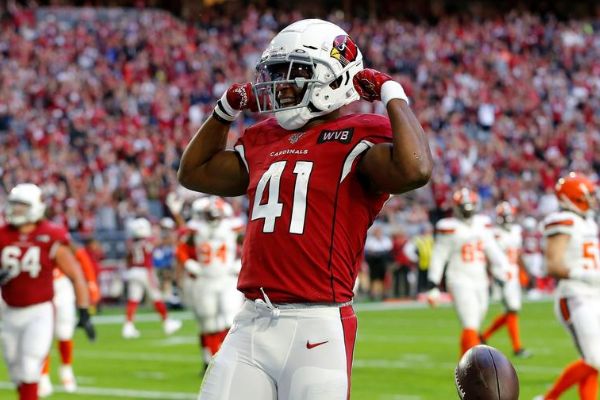 Week 12
At Dallas Thursday, Drake carried 7 times for 25 yards, with no carry for more than 4 yards as RB Josh Jacobs’s backup. That contribution by Drake was part of a season-high 143 rushing yards. He caught 2 passes for 5 yards.
After establishing career highs of 955 yards and 10 TDs rushing last season with Arizona, Drake has exceeded 10 carries once and 34 yards in a game just twice in 2021 and hasn’t scored in the 4 most recent games. This week’s opponent, Washington, ranks 4th in rushing yards allowed. There’s no reason to have Drake in your fantasy lineup.
Week 10
It was a rough night for Drake and the Raiders rushing attack. The Raiders were unable to establish a ground game and trailed throughout the game. The Raiders couldn’t sustain long drives, and this impacted Drake’s ability to get anything going on Sunday Night Football against the Chiefs. Drake was out touched by Josh Jacobs 12 to 6 in the game, and he even ceded a lot of 3rd down work to Jalen Richard prior to Richard’s injury. Drake finished the night with 4 carries for 16 yards and 2 catches (on 3 targets) for 15 yards.
The usage in this game was disappointing as Drake had seen 10+ touches in the 2 previous games and had scored 3 TDs over the last 3 games. It will be difficult to trust Drake in fantasy lineups unless we see something different moving forward. We have Drake ranked at RB40 this week against the Bengals. The Bengals have surrendered 7 rushing TDs to opposing RBs over their last 6 games. The next three games on the schedule for the Raiders are CIN, @DAL and WSH. Drake is our RB45 the rest of the way.
Week 9
Drake picked up 100 scrimmage yards on just 10 touches in the Week 9 loss to the Giants over the weekend. He was out-touched by RB Josh Jacobs 17-10, but Drake was able to make some big plays happen in the passing game in the 2nd half. Jacobs was the clear lead back toting the ball, but the Raiders turned to Drake late in an attempt to get back to level. The resurgent year continues to pay off for Drake as he looked like the more explosive of the two runners. Granted, Jacobs was more between the tackles and had a big gain taken back on a penalty, but it was Drake that was turned to in the 4th when the Raiders needed some plays to be made. Who knows how this one will shake out, but there should still be decent room for both of them for fantasy purposes. A big-time game this Sunday night against the Chiefs should highlight both runners again.
Week 2
With Josh Jacobs sitting this one out with a toe injury, Drake saw his snap share increase from 29% in Week 1 to 71% against the Steelers, though the increased snap share didn’t lead to much in the way of additional work. Whereas Drake had 6 carries and 5 receptions in Week 1, he had 1 extra carry and the same number of receptions this week. He remained ineffective as a runner, averaging just more than a yard per carry, though Las Vegas was without their 2 starting guards. That said, he averaged 9 yards per reception, and he was well used as an offensive weapon.

It’s clear that Drake’s primary role on the team will be that of a receiver.. But even if Josh Jacobs continues to miss time, it looks as if the coaching staff prefers a bigger back, even the likes of Peyton Barber, to take the between the tackles work, which will likely include goal-line work. It’s possible that Drake could have spike games when the Raiders are trailing, though based on two weeks, they may not find themselves in a ton of those contests.
Week 1
It was an interesting Week 1 for Drake, who had a mixed bag of results. He underwhelmed on the rushing side of things, totaling just 11 yards on 6 carries. On the positive side, his work in the passing game provides reason for optimism. He caught all 5 of his targets for 59 yards. Drake looks to be filling a very specific role as the passing downs back. He is for all intents and purposes replacing both Jalen Richard and DeAndre Washington. The unfortunate part for Drake is Jacobs' work in the passing game. Especially when you consider his health coming in. Long term, he could be a monster if Jacobs were to miss time, but at this point he is a bye week FLEX in PPR leagues at best.

Drake is coming off an inefficient 2020 campaign with the Cardinals. He got a surprisingly lucrative deal from Las Vegas in free agency (2 years, $11 million), but it sounds like the Raiders view him as a change-of-pace, pass-catching back behind Josh Jacobs.

We’ll keep an eye on this backfield this summer, but Drake will struggle for bankable weekly fantasy value if he’s the clear #2 behind Jacobs.

Drake out for season with broken ankle

Raiders RB Kenyan Drake broke his ankle in Sunday's loss to Washington and will miss the rest of the season, according to NFL Network's Ian Rapoport. Drake has averaged 5.1 carries and 2.6 targets behind Josh Jacobs over the last 8 games, so his absence could mean a few extra touches for Jacobs. RB Jalen Richard landed on the COVID list on Sunday morning, so we'll see when he's cleared to return. RB Peyton Barber also figures to be active for Vegas the rest of the way.

Drake out with ankle injury

Raiders RB Kenyan Drake was carted to the locker room after taking a big hit in the 2nd quarter of Sunday's game vs. Washington. He was quickly ruled out with an ankle injury. We'll update Drake's status when we know more, but this looks like a likely long-term injury.

How much work will Drake get?

When asked Friday whether RB Josh Jacobs' absence means a bigger opportunity for RB Kenyan Drake, Raiders HC Jon Gruden instead talked up RB Peyton Barber. "It's an opportunity for Peyton Barber," Gruden said, evidently seriously. "We think he's a heck of a back coming from Tampa. I've had a chance to really get behind the scenes on him. I like the way he runs and catches and picks up blitzes. Kenyan will continue to play a role in our system no matter who the other back is. We're excited about this opportunity to see what we have." We'd be very surprised if Barber out-carried Drake in Pittsburgh on Sunday -- especially consider Vegas just gave Drake a 2-year, $11 million deal in free agency. But it at least sounds like we shouldn't expect Drake to step into a true every-down role.

The Raiders have activated RB Kenyan Drake off the NFI list. Now we get to start learning more about his role with the new team. Vegas also placed RB Theo Riddick on the reserved/retired list

The Raiders have placed RB Kenyan Drake on the non-football injury list to open training camp. The team didn't announce what injury is keeping Drake out. He was seen working on the side with trainers at Wednesday's practice, though. We'll keep an eye on his status in the coming days. RBs Jalen Richard and Theo Riddick, meanwhile, landed on the COVID list. Maybe Josh Jacobs will get a few more chances to show Vegas coaches he can catch passes.