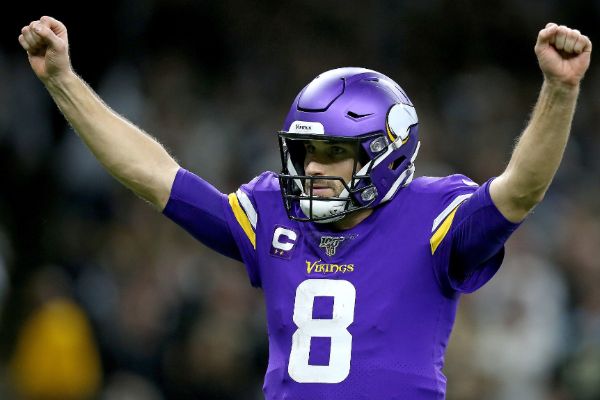 Cousins has finished as a QB1 in 3 of his 4 seasons in Minnesota.

That type of upside remains for 2022. We like the hiring of HC Kevin O’Connell and the return of TE Irv Smith, who missed all of last season.

The QB landscape continues to deepen with each passing year, though. And with minimal contributions on the ground, Cousins will need to remain highly efficient in his age 34 season.

At bottom, Cousins should remain a strong matchup-based play — especially for as long as the Jefferson-Thielen duo can stay healthy.

Vikings QB Kirk Cousins completed 31 of 39 attempts for 273 yards and 2 TDs in Sunday's Wild Card loss vs. the Giants. He also punched in a 1-yard rushing TD in the contest. The veteran put forth about as valiant of an effort as one can ask for, but the Giants ultimately proved to be too big a challenge. It'll be interesting to see how HC Kevin O'Connell and company rebound from this upset loss in 2023. It's fair to say the effort should start with bolstering their defense that ranked 28th in Football Outsiders' DVOA this season.

Vikings TE Irv Smith has been activated from IR, putting him on track to play vs. the Bears on Sunday. He's been out since going down with a significant high-ankle sprain in Week 8. Smith's return is a boost to Minnesota's passing game, but he's unlikely to be a big fantasy factor in the postseason behind TE T.J. Hockenson.

Vikings starters could be pulled early

Vikings HC Kevin O'Connell said Friday that his regulars will start this weekend's game vs. the Bears but that there's a plan to potentially pull them early to get backups some reps, according to ESPN's Kevin Seifert. The Vikings can't get the NFC's #1 seed and can only climb from #3 to #2 with a 49ers loss to the Cardinals. QB Kirk Cousins, RB Dalvin Cook, WRs Justin Jefferson and Adam Thielen and TE T.J. Hockenson are candidates to leave Sunday's game early.

In 2022, Cousins hit 4,100 passing yards — and finished as a QB1 — for the 3rd straight season. Playing alongside young HC Kevin O’Connell, Cousins will likely remain the starter for at least 1 more season. He'll play next season at 35 years old.