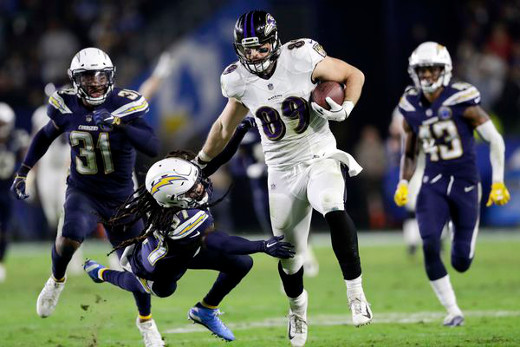 Week 13
Despite seeing a team-high 9 targets, TE Mark Andrews caught just 4 passes for 50 yards. This was his 2nd straight game with 4 catches and his lowest receiving yardage total in the last 4 games. The good news for Andrews going forward, the volume seems to be stable. This has made him a reliable option week in and week out from a yardage standpoint. Through Week 13 Andrews is the 2nd best fantasy TE in all formats behind only Travis Kelce. There is little reason to expect a drop off the rest of the way.
Week 12
Andrews caught 4 of 10 targets for 65 yards and 1 TD in the Ravens' Week 12 win over Cleveland.
Andrews tied Marquise Brown for the team lead with 10 targets but was on the wrong page with Lamar Jackson several times as was the intended target on all 4 of Jackson’s INTs.
Andrews had almost all of his production on the first drive of the 2nd half as he came down with a 39-yard jump ball and then scored from 13 yards out.
Week 11
Andrews caught 8 of 10 targets for 73 yards in the Ravens' Week 11 win over the Bears.
Andrews led the team in all receiving categories with Marquise Brown out of the lineup and starting QB Lamar Jackson not available due to illness.
It was a strong game from Andrews considering the situation. He will be locked in as a top 5 TE for the rest of the season, especially with Lamar expected back in Week 12 at home against the Browns.
Week 6
The Chargers have no answer for opposing TEs. And with L.A. being very good at keeping WRs in front of them, the Ravens wisely deployed Andrews as a featured part of their attack. Since they were in firm control of this game from the 1st quarter on, Andrews was limited to 6 targets, but he made them count by torching them down the seam and also capping his day off with a red zone score.

When Lamar Jackson began to increase his pass attempts a few weeks ago, Andrews came into this game averaging 9 targets, 7 receptions, 108 yards and 0.67 TDs in those 3 games. Obviously, a continuation of that pace is improbable, but it shows fantasy managers that when Andrews is deployed well, he’s capable of competing with just about any other TE in the league. It appears he’ll continue to be a weekly autostart at TE, and aside from the occasional clunker, he should have a solid combo of floor and ceiling each week.
Week 5
Lamar Jackson, Hollywood Brown, and Andrews led an incredible comeback on Monday Night Football, scoring twice and converting two 2 PT conversions in the 4th quarter. Andrews has always been one of Jackson’s favorite targets, but the connection was on full display against the Colts. Andrews saw 13 targets, good for a 30.2% target share. He was also on the field for 56 out of 73 snaps, so he is seeing elite level target share and snap counts. Andrews finished with 11 catches for 147 yards and 2 TDs. This week, Andrews will be going against a Chargers defense that has given up over 400 yards to TEs this season and has allowed a score to TEs in 4 out of their 5 games. Andrews is our overall TE3 this week against Los Angeles.

Week 4
Andrews is back on track after a bumpy 2 weeks. Against Denver, he caught 5 of his team-high 8 targets for 67 yards. His 8 targets are the most he has seen thus far, topping the 7 he saw last week.

Going forward, Andrews remains an upper echelon option that may not be Kelce or Waller but is a part of the tier below them. He sees a ton of volume while clearly having a special connection with Lamar Jackson. He should be a really strong play the rest of the way.
Week 3
After being targeted 5 times in each of the first 2 games, Andrews tied for the team lead with 7 targets against the Lions. The matchup couldn’t have been better because Detroit was leaving open areas in the middle of the field on a consistent basis, allowing Andrews to not only have easy receptions, but there was plenty of yardage to be had after the catch. Although he didn’t score, Lamar Jackson’s best 2 opportunities for TD passes in the red zone were targets that went to Marquise Brown and Devin Duvernay.

Although Andrews posted 100 yards in this game, it was the first time in 3 games he surpassed 57 yards, and he’s yet to find the end zone. Optimists may be looking for positive TD regression, but with Sammy Watkins on the field and Rashod Bateman expected back from the IR in the near future, Andrews is no longer the only game in town for Lamar Jackson in the red zone, so it wouldn’t be a shock to see him underperform from a TD standpoint. And before this game, he was targeted 5 times in each of the first 2 games, as Watkins has already cut into his target share.
Week 2
Andrews continues to put up solid production in this run-first offense. He appears to be behind Hollywood Brown in the pecking order this year. However, Andrews has always been a favorite target for Lamar Jackson.

Andrews made a smart play late in the 2nd quarter to make a catch and fight to get out of bounds preserving the Ravens an opportunity at a late FG attempt. Andrews finished 3rd in targets for the Ravens in this one with 5. He ended the night securing all 5 targets for 57 yards.

Detroit has allowed moderate production from the TE spot this season and we have him ranked at TE7 this week against the Lions. We have Andrews at TE8 the rest of the way. He is a great option and will continue to see looks from Jackson anytime he needs a big play.
Week 1
Monday night was rough for Andrews. He caught 3 of his 5 targets for just 20 yards. This was not the stat line those that targeted Andrews looked for when they drafted him in the early part of drafts. A season ago, Andrews only had 3 games where he saw 5 or fewer targets. Time will tell whether the volume will return to previous form or if the additions of Sammy Watkins and eventually Rashod Bateman will limit the potential upside of Andrews. For now, Andrews remains a no-doubt TE1 given the position's thin nature.

Andrews has tallied back to back top-6 fantasy finishes. He’s done so with favorable volume and an elevated TD rate.

Both of those key factors are at risk of declining in 2021. Historically, TD production is fickle -- especially for pass catchers. In addition, rookie WR Rashod Bateman looked like a legit Round 1 talent on tape and was drafted as such. If he hits right away, Andrews’ fantasy stock could suffer.

At bottom, the TE's early Round 5 ADP is simply unattractive.

The Ravens have agreed to a 4-year extension with TE Mark Andrews. NFL Network's Ian Rapoport reports that it will average $14 million. ESPN's Jeremy Fowler reports that $37.6 million of the $56 million is guaranteed. This doesn't change anything for Andrews' fantasy outlook, other than to assure he stays in Baltimore for a while.

Ravens TE Mark Andrews needed to be helped off the practice field Thursday morning, but it doesn't sound like it'll be a lingering issue. HC John Harbaugh said afterward that Andrews was dealing with "some pretty serious cramping," thanks to a spike in humidity. Andrews got fluids via IV but should rebound quickly.

Ravens TE Mark Andrews has been activated from the COVID list. That puts him on track to return for Monday night's game vs. the Browns. Andrews posted 7-61 and 5-96-1 lines on 16 total targets in his last 2 games and now gets Cleveland's 30th-ranked TE defense. He scored twice in the 1st meeting against the Browns back in Week 1.

Andrews not expected to play Week 13

Ravens TE Mark Andrews remains on the COVID list and is not expected to play against the Cowboys on Tuesday, ESPN's Adam Schefter reports. Andrews should be on fantasy benches. His absence is a hit to QB Lamar Jackson's upside.

Ravens TE Mark Andrews has tested positive for COVID and will miss Tuesday night's game against the Steelers, according to NFL Network's Ian Rapoport. With TE Nick Boyle out for the season, Luke Willson is left as Baltimore's top TE.