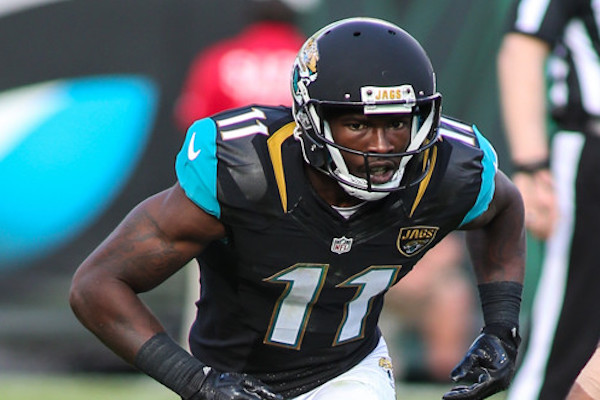 The Patriots are signing WR Marqise Lee to a 1-year deal, according to ESPN's Adam Schefter. Lee has appeared in just 6 games and totaled only 4 targets over the past 2 years because of knee trouble. That began with the August 2018 ACL tear. He joins a limited crew of receivers in New England, but we wouldn't bet on Lee cracking the top 3 -- if he even makes the regular-season roster.

The Jaguars have released WR Marqise Lee. The 2014 2nd-rounder posted 63-851-3 and 56-702-3 lines in 2016 and 2017, respectively, but has appeared in just 6 games over the past 2 seasons due to knee trouble. He'll turn 29 this November. We'll see where Lee lands next, but he's unlikely to be a 2020 fantasy factor. The Jags, meanwhile, move forward with WRs D.J. Chark, Dede Westbrook and Chris Conley atop the depth chart. They'll likely add at least 1 rookie to the mix later this week.

Lee out for Week 2

Jaguars WR Marqise Lee (knee) has been downgraded to out for Sunday's game against the Texans. It seems like he suffered a setback with that knee on Thursday. Lee isn't worth stashing in redraft leagues.

Jaguars WR Marqise Lee (knee) is listed as questionable for this weekend's game against the Texans. He was added to the injury report on Thursday, so it looks like he might have suffered a setback with that knee he hurt last August. Lee played just 21% of the offensive snaps in the opener, so there's little fantasy impact here. Dede Westbrook, D.J. Chark and Chris Conley are Jacksonville's top 3 WRs.

The Jaguars on Saturday activated WR Marqise Lee from the PUP list, and he joined the team on the field, according to NFL.com. There had been reports that Jacksonville might not have Lee for the start of the regular season, which no longer should be in question. Dede Westbrook, D.J. Chark and Chris Conley have been running as the top 3 receivers. We'll see if Lee can work his way back into that mix now that he's back from the ACL tear that cost him all of 2018.