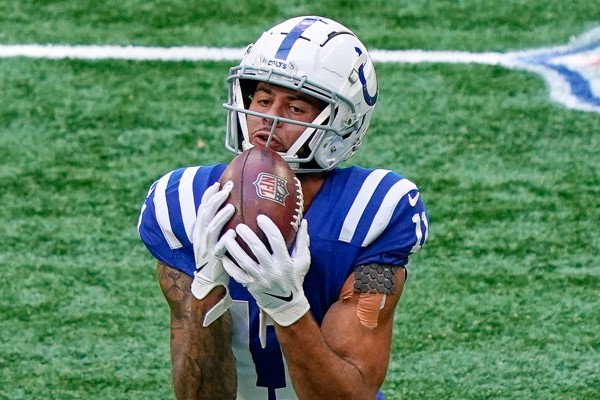 Week 6
Pittman took a backseat to T.Y. Hilton in Week 6. Pittman only saw 3 targets, securing 2 for 35 yards. He did, at least, lead the team in routes.

This game got out of hand early and saw Carson Wentz throw the ball only 20 times.

The good news for Pittman owners is that Hilton came away from the game with a quad injury that could challenge his Week 7 availability. Parris Campbell, meanwhile, landed on IR.

Game flow could also be on Pittman’s side. Indy heads to San Francisco as a 4-point underdog with nothing scary in the secondary. Pittman should be an attractive PPR option.
Week 5
Pittman played 61 out of 69 total snaps, leading the WR group in snaps played. He also led the team in catches (6) and targets (7). Pittman was able to make an incredible play at the beginning of the 2nd half on a very underthrown ball from Carson Wentz. He went up over the DB and pulled in the catch, then finished the play off by running through contact for the next ten yards into the endzone. He looked strong, athletic, and polished throughout the game. It’s easy to see why Wentz continues to look his way often week after week. He finished the night with 6 catches for 89 yards and 1 TD. Next on the schedule for Pittman and the Colts WR group is a Texans secondary who has not given up a receiving TD to a WR since Week 1, although we think a lot of that is matchup-based. Take note: Pittman has at least 6 receptions in each of his last 4 games.

Week 4
As was the case in Week 3, Pittman came close to a 2-TD game on Sunday. Carson Wentz overshot him on one end zone ball. On another play, Pittman caught a ball before getting tackled just shy of the goal line. The TDs should come for Pittman, who saw a team-high 8 targets (a 25% team share, one that matches his season-long mark). With a highly favorable schedule upcoming — one that includes the Texans, 49ers, Titans, Jets and Jags after a Monday nighter at Baltimore — Pittman looks like a fine trade target. Wentz's health will be key going forward, but he at least showed major strides there from Week 3.
Week 3
QB Carson Wentz made it back from dual ankle sprains to start Sunday’s game in Tennessee -- and he made it through with no apparent setbacks.

That likely helped Pittman’s target volume. His 12 looks made up 32.4% of Wentz’s 37 attempts, with the nearest teammate down at 7. Pittman caught just 6 for 68 yards.

He and Wentz just missed connecting for a TD in the middle of the 3rd quarter, and Wentz clearly missed Pittman with at least a couple of other throws. The wideout logged no drops and has yet to be charged with 1 this season by Pro Football Focus.

Barring indications of a setback during the practice week, we’ll assume that Wentz’s ankles will improve and potentially improve his throwing accuracy.

Pittman gets a tough individual matchup with Miami in Week 4 but a much more attractive spot against Houston in Week 5.
Week 2
There’s the guy we were excited about this summer!

After a 29-yard dud in the opener, Pittman exploded for an 8-123 line in Week 2. And it came against a tough Rams pass defense. Pittman used his 6’4 frame to box out defenders on a couple of deep balls. And he showed sneaky after-catch ability on shorter grabs.

Pittman dominated market share, soaking up 12 of the Colts’ 36 targets (33%). He amassed 142 air yards and saw 3 of the team’s 9 red-zone targets. If that type of usage continues, Pittman will be an every-week fantasy starter.

The concern in the short term is the status of QB Carson Wentz, who sprained both ankles in the loss to the Rams. If he misses time, the Colts will be forced to turn to QB Jacob Eason, who went 2 for 5 for 25 yards and an INT in relief of Wentz.

Pittman would be tough to trust in fantasy lineups if he’s catching balls from Eason.
Week 1
Pittman’s stat line of 3 receptions for 29 yards on 3 targets is disappointing knowing Carson Wentz attempted 38 passes in Week 1. However, there is a sliver lining. A lot of people forget after a disastrous start to the year the Seahawks shut down WRs down the stretch in 2020. After Week 9 vs. Buffalo, no WR scored over 14 half-PPR points vs. Seattle and only 6 WRs hit double digit points during that span.
Even though the production wasn’t there for Pittman, the usage was as he led the team with a route on 43 of 44 drop backs. This week is another tough matchup for Pittman as the Colts will take on the Rams. After Week 2 a buy-low window should open for Pittman as the Colts schedule does lighten up by mid-season.

Pittman was mostly disappointing as a rookie, finishing with 40 catches for 503 yards and a single score in 13 games. It’s tough to know how big an impact a September calf injury had on the rest of his season (but it obviously didn’t help). Pittman did flash with a 5-catch, 90-yard outing in the Colts’ playoff loss to the Bills.

He’ll face basically the same competition for targets this year as last -- and has a real chance to emerge as Indianapolis’ #1 WR. Carson Wentz might also prove to be an upgrade over Philip Rivers.

We wouldn’t want to go into this season relying on Pittman as an every-week fantasy starter. But there’s certainly some breakout potential for the 2nd-year wideout.

Colts WR Michael Pittman (ankle) is active for today’s game against the Rams. He’s a shaky fantasy play vs. a defense that allowed the fewest fantasy points to WRs last year and limited the Bears WRs in this year’s opener. WR Parris Campbell (abdomen) is inactive.

ESPN's Adam Schefter reports that the Colts are "confident" WRs Michael PIttman (ankle) and Parris Campbell (abdomen) will play today against the Rams. Each will be tested in pre-game warm-ups to confirm his readiness, though. Neither ranks high among our Week 2 fantasy plays at the position.

Colts WRs Michael Pittman (ankle) and Parris Campbell (abdomen) are questionable for this weekend's game vs. the Rams. Both guys were added to the injury report and limited in Friday's practice. Campbell wasn't a fantasy option anyway after running a route on just 65% of pass plays in the opener. Pittman is also better off on fantasy benches this week at less than 100% and in a tough matchup.

Pittman ready to break out?

The Athletic's Stephen Holder predicts that Michael Pittman will become the Colts' #1 WR this season. "If he wants to become the Colts’ go-to wide receiver, the opportunity is there," Holder writes. "And I happen to think he’s very much up to the task." Pittman didn't stuff the stat sheet as a rookie. But his development was stunted in September by a significant calf injury. He returned to play 72+% of the Colts' offensive snaps in each of the final 10 games -- and went for 90 yards in the playoff loss in Buffalo. With T.Y. Hilton past his prime and Parris Campbell's already lengthy injury history, Pittman certainly has a chance to lead this team in targets. We like him as an upside pick at his 8th- or 9th-round price tag.

Colts WR Michael Pittman (concussion) is active for today’s game against the Jaguars. It’s a great matchup, but Pittman has seemingly fallen behind T.Y. Hilton and Zach Pascal on the totem pole, totaling just 7 catches on 14 targets over the past 3 weeks.