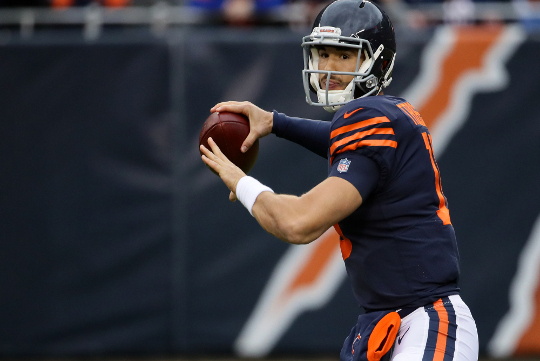 The Steelers QB job should come down to whomever wins it in training camp and preseason. Pittsburgh would probably love to have their 1st-round rookie seize the reigns right away. But Trubisky would likely be a better bet for fantasy. We already know that his mobility translates to NFL rushing production. And we’ve seen top-12 weekly upside – with a lesser (arguably?) set of pass-catchers than he has now. Trubisky looks intriguing as a late QB3 for best-ball tournament teams. Beyond that, we’ll see what the summer says.

Steelers QB Kenny Pickett practiced with the third-team offense this offseason, per ESPN’s Brooke Pryor. While a contender for the starting job, Pickett has an “uphill battle” to start the opener at Cincinnati, per Pryor. Outside of superflex leagues, it's easy to avoid Pittsburgh QBs in 2022 fantasy drafts.

Trubisky a near lock to start?

Steelers beat writer Ray Fittipaldo believes QB Kenny Pickett must “blow their doors off to beat out [Mitch] Trubisky to start the season opener.” We’d be surprised if Pickett doesn’t start games in 2022. But the point stands that Trubisky — with 50 career starts — has the upper hand early on. Our current QB projections have Pickett starting the majority of Pittsburgh's games next season.

Pickett to battle for Week 1 job

Steelers HC Mike Tomlin confirmed that 1st-round QB Kenny Pickett will be given a chance to start Week 1. “Yeah, he certainly has a chance,” Tomlin said. “We felt he came ready made and hopefully that’s an asset to him being ready — if performance dictates.” We’d call Mitch Trubisky the favorite to start come September, but he’ll likely be on thin ice.

Steelers go with Pickett over Willis

The Steelers grabbed QB Kenny Pickett with the 20th overall pick of the 2022 NFL Draft. Pickett spent 5 years at Pittsburgh, starting most of the past 4. It wasn’t until 2021 that he broke out, though, throwing for 4,319 yards and 42 TDs. That more than doubled his career total for TD tosses. Pickett brings above-average mobility (72nd-percentile speed score for the position), but he has drawn comparisons with Andy Dalton and Teddy Bridgewater. We see limited fantasy football upside here, but Pickett stands a good chance to beat out QB Mitchell Trubisky this summer. That’s a situation to avoid in early fantasy drafts.

The Steelers have agreed to a 2-year deal with QB Mitchell Trubisky, according to multiple reports. It's a sensible fit for both sides. Trubisky gets another shot at starting, after a year in Buffalo. Pittsburgh gets a stopgap type with a much higher ceiling than Mason Rudolph presents. We don't believe this move keeps the Steelers from being in the market for a QB in this year's NFL Draft, but Trubisky's arrival makes it less of a glaring need. Assuming Trubisky hits Week 1 as the Pittsburgh starter, he could be especially good for WR Chase Claypool. Each of Trubisky's 1st 3 NFL seasons found him earning better Pro Football Focus passing grades in the deep range (20+ yards downfield) than intermediate or short. Claypool sported 11.4-yard and 13.2-yard average depths of target the past 2 seasons -- according to Pro Football Reference -- compared with 8.5 and 7.9 for Diontae Johnson. As for the QB himself, Trubisky has displayed top-12 fantasy-scoring potential and makes for an intriguing best-ball option anywhere outside that range.

Update: NFL Network's Tom Pelissero reports that Trubisky is getting $14.25 million over 2 years, with incentives that could make it worth up to $27 million. Clearly, the Steelers aren't committing to Trubisky but building in financial upside in case he proves truly starter-worthy.