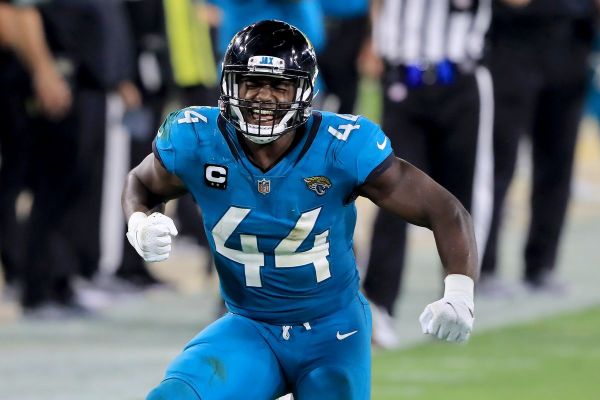 Steelers LB Myles Jack didn't play in Sunday's game against the Saints. He opened the week not practicing with a knee issue but finished with a full Friday workout and didn't appear on the final injury report. But LB Robert Spillane started in his place, next to Devin Bush. We'll see whether coaches reveal the motivation this week.

Steelers LB Myles Jack did not practice Wednesday because of a knee issue. He saw his usual level of playing time in the Week 8 loss to the Eagles, but missing practice coming out of the Week 9 bye seems ominous. HC Mike Tomlin gave no insight into expectations for Jack this week. We'll see about his status the next 2 days.

The Steelers on Thursday signed LB Myles Jack to a 2-year, $16 million deal with $6.5 million guaranteed. That's starter money for 2022 at least. According to Spotrac, the contract seems to be structured in a way that Pittsburgh can decide about 2023 after seeing Jack for a year. The 26-year-old (until September) washed out with the team that drafted him and then extended him. We'd be surprised if he turns into a terrific real-life player in Pittsburgh. For fantasy football, on the other hand, Jack lands well in what should be a full-time role next to a LB (Devin Bush) who has been more disappointing relative to 1st-round draft status. Depending on where Jack lands in IDP drafts this summer, the new Steeler could be a nice value.

ESPN's Adam Schefter reports that the Jaguars are releasing LB Myles Jack. He's still just 26 and had remained a starter for Jacksonville, but Jack's contract has outweighed his contributions. His release will save the team $8.35 million in cap space. Expect Jack to land at least a shot at a starting job elsewhere.