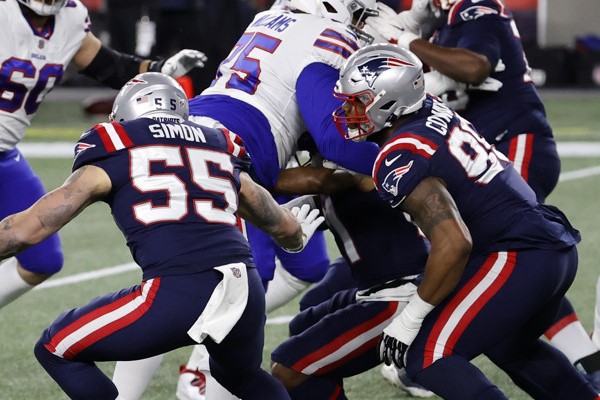 Week 9
When Bill Belichick faces a QB who struggles with confusing zone looks, good things usually happen for this defense. And facing former division rival Sam Darnold, it was fairly easy to make him miserable. Not only did he complete fewer than half of his passes, but the Pats recorded 3 INTs, including a pick-6 by J.C. Jackson. Otherwise, the only other fantasy production they had was a sack by Matthew Judon. Of course in leagues that reward for low points allowed, holding the Panthers to 6 points was a bonus as well.

Although this is far from a slam-dunk fantasy option each week, they’ve been a top-10 DST this season, and it’s likely they maintain that level, especially when playing offenses that are average or worse. They’ve been consistently generating takeaways, and they came into this game with at least 2 in each of their last 3 contests. In addition, they’ve recorded multiple sacks in 3 of their last 4 games, though this typically won’t be a unit that puts up big sack numbers.
Week 7
Facing a Jets team with QB Zach Wilson, who the Patriots picked off 4 times earlier in the season, they only saw 10 pass attempts from the rookie before they knocked him out of the game with a knee injury. That led to Mike White taking over. And although White was solid in throwing for over 200 yards and a TD, the Pats picked him off twice. Otherwise, they recorded a pair of sacks and a forced fumble that they recovered. So it wasn’t the dominant performance they had earlier in the year, but it was a solid game for them.

Despite an influx of offseason talent, this has been a good NFL defense, but one that’s a bit above average for fantasy. They’ve posted 15 sacks on the year, which puts them right in the middle of the league. However, their 11 takeaways are near the top of the league, but they’ve feasted on a few bad defenses to get those. Ultimately, they are best used as a streaming option when they have a good matchup, but when they play a stronger offense, they’ll likely struggle to pile up fantasy points.

Patriots S Adrian Phillips (knee) and DT Christian Barmore (knee) are active for today's game against the Dolphins, after entering the day questionable. LB Dont'a Hightower is inactive with his own knee injury.

Patriots S Kyle Dugger (hamstring), S Adrian Phillips (knee, illness) and CB J.C. Jackson (elbow) are active for today's game against the Jaguars. All arrived questionable but should be ready for IDP use at their appropriate levels.

The Patriots on Saturday activated LB Ja'Whaun Bentley and edge Matt Judon from the COVID list. That should make each available for Sunday's game against the Jaguars.

The Patriots on Monday placed EDGE Matt Judon and LB Ja'Whaun Bentley on the COVID list. We'll see whether either can make it back onto the active roster -- and into IDP lineup contention -- ahead of Sunday's game against Jacksonville.