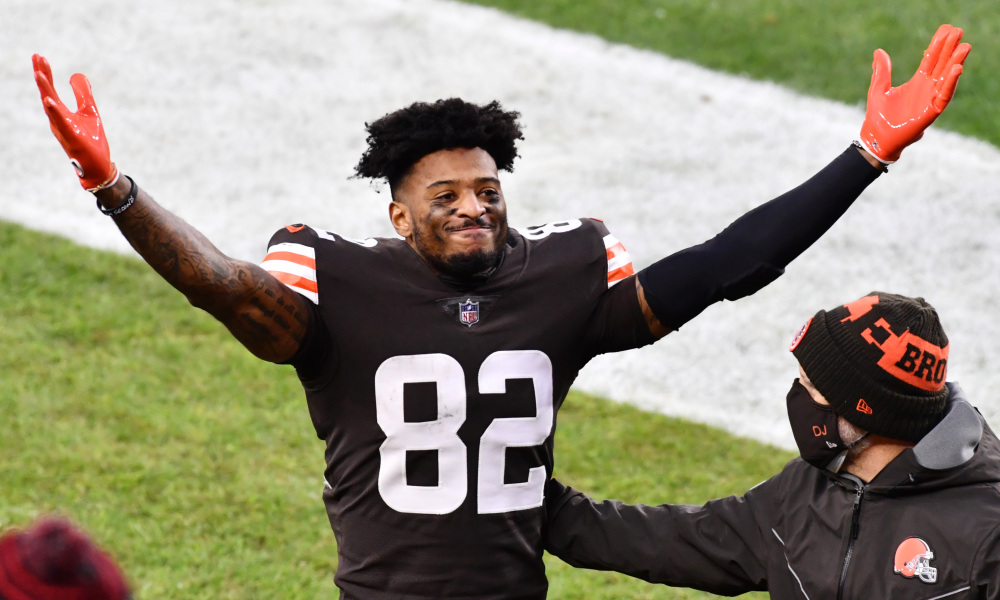 Browns QB Baker Mayfield, QB Case Keenum, WR Jarvis Landry and TE Austin Hooper will not be activated from the COVID list for tonight's game vs. the Raiders, according to NFL Network's Ian Rapoport. So QB Nick Mullens will get the start for Cleveland. His top 2 WRs figure to be Donovan Peoples-Jones and Rashard Higgins. David Njoku should top the TE depth chart. We'll see if TE Harrison Bryant (ankle) is able to play. Expect a run-heavy game plan featuring Nick Chubb from the Browns.

Browns WR Donovan Peoples-Jones (groin) is active for tonight’s game vs. the Ravens. He only got in limited practices on Thursday and Friday, so DPJ figures to be operating at less than 100%. WR Rashard Higgins is a healthy scratch tonight.

Browns WR Donovan Peoples-Jones (groin) is inactive for today’s game vs. the Lions. Rashard Higgins figures to operate as Cleveland’s #2 WR but would be a desperation fantasy play. Expect QB Baker Mayfield to hand it off a bunch today.

Insider Michael Silver reports that Browns HC Kevin Stefanski told his team today that WR Odell Beckham is "essentially not on the team right now." Stefanski didn't reveal much in his press conference, only confirming that Beckham was excused from Wednesday's practice and that the 2 haven't spoken over the past 24 hours. We'll continue to keep an eye on this situation, but it sure seems like Beckham's time with the Browns might be over. His absence would leave Jarvis Landry, Rashard Higgins and Donovan Peoples-Jones as Cleveland's top 3 WRs. (Peoples-Jones is expected to return to practice from his groin injury today.)

Browns WR Jarvis Landry (knee) was not elevated to the active roster on Saturday and won't play against the Cardinals tomorrow. Landry got back on the practice field this week and seems likely to return for Week 7's game vs. the Broncos. Rashard Higgins and Donovan Peoples-Jones will continue to serve as Cleveland's #2 and #3 WRs tomorrow.