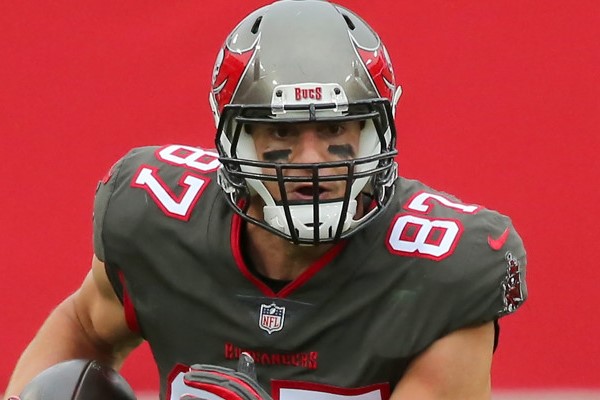 Week 4
Gronk missed the SNF Week 4 game against his old team with multiple injuries. He was injured in Week 3 against the Rams but was able to return after going to the locker room. It later came out that he had multiple fractured ribs and a punctured lung. Those injuries left him unable to make his return to Foxborough. The Bucs passing game certainly missed Gronk, especially in the red zone. With his injuries leaving him week to week, we don’t have him ranked in our initial Week 5 rankings; this could change throughout the week as practice reports come in. If he is able to play this weekend, he will be a borderline top 10 option against a Dolphins secondary that has given up over 220 yards and 3 TDs to opposing TEs through 4 games this season. His next three games on the schedule are MIA, @PHI, CHI.
Week 3
Gronkowski left this game briefly after taking a big hit to the ribs. The good news for fantasy owners is Gronk returned to the game. Even though he failed to find the end zone for the first time this season, his 4-55 on 7 targets was still a strong day for fantasy owners. That baseline will consistently make Gronk a low-end TE1 and with his TD upside he should continue to be the discussion for a top 5 TE finish on the year.
This week the Bucs take on the Patriots. Call it a gut feeling, but a Brady to Gronk TD this week seems inevitable as the boys travel up Foxboro for their first game against their old team. This makes this DFS stack intriguing for Week 4.
Week 2
Gronkowski caught 4 of 5 targets for 39 yards 2 TDs in the Bucs' Week 2 win over the Falcons.
Gronkowski scored on the Bucs opening drive when all Bucs WRs were lined up on the left with Gronk isolated on the right against just 1 defender. His 2nd TD was from 1 yard out after a play-action fake to Leonard Fournette.
Gronk has been looking spry through 2 weeks with multiple scores in both games and should continue to be deployed as a no brainer TE1 behind this offensive machine led by Hall of Famer Tom Brady.
Week 1
QB Tom Brady knew where to go when he had to make a play, because he had been there so many times before. He just looked for Gronk. Brady’s longtime teammate caught all 8 targets for 90 yards and 2 TDs. Both scores came in the red zone, from 2 and 11 yards out.

It doesn’t appear that Gronkowski’s encore after a short-lived retirement is going the way of TE Jason Witten’s farewell return. In Witten’s case, we could just remember the greatness that he used to have. Gronk has shown that he is still Gronk, which is very good.

After a year off, Gronkowski, 32, reminded us that he’s still a fantasy-relevant TE. While an O.J. Howard injury helped, Gronk retained his scoring dominance with a 15.5% TD rate (7 on just 45 catches). He should remain a red zone weapon in 2021.

Look for his volume to come down, though, with Chris Godwin, Mike Evans and Antonio Brown all returning for 2021. Gronk will also retain a high risk of injury, despite the clean 2020. He’s not one of our top TE targets.

Bucs TE Rob Gronkowski (ribs) remained sidelined for Thursday's practice. He seems unlikely to return for this weekend's game vs. the Bears. TE O.J. Howard (ankle) returned to a limited practice on Thursday and figures to split pass-catching duties with TE Cameron Brate again on Sunday.

Bucs TE Rob Gronkowski (ribs) remained sidelined for Wednesday's practice. That's not a good start for his chances of returning for this weekend's game vs. the Bears. TE O.J. Howard was also sidelined on Wednesday with an ankle injury. We'll get another update on both guys tomorrow.

The Buccaneers have ruled TE Rob Gronkowski out for Thursday night's game against the Eagles with his rib injury and assortment of adjacent damage. That will keep Cameron Brate as their top receiving option at the position. It'll be Gronk's 3rd straight missed game.

Bucs TE Rob Gronkowski (ribs, lung) remained sidelined for Tuesday's practice. HC Bruce Arians said Monday that Gronk had a shot to play vs. the Eagles on Thursday night, but that seems unlikely at this point. We'll get another update on his status tomorrow.

Gronk will be "very close" for Week 6

Bucs HC Bruce Arians said Monday that TE Rob Gronkowski (ribs, lung) will be "very close" to being cleared for Thursday night's game vs. the Eagles. We'll keep an eye on his progress over the next couple of days. For now, fantasy owners should assume Gronk won't play Week 6 -- and consider it a bonus if he does.