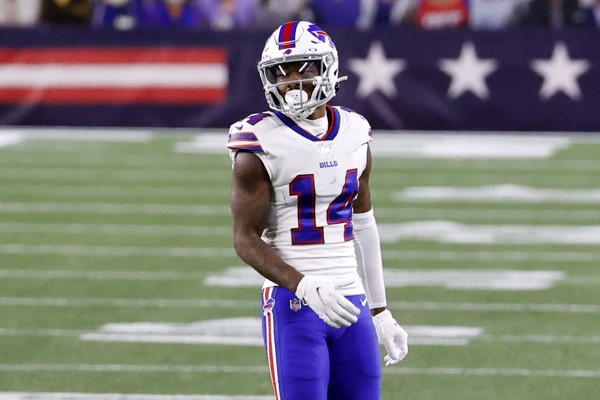 Week 14
Diggs caught 7 of 13 targets for 74 yards in the Bills' Week 14 overtime loss to the Bucs.
Diggs was somewhat unproductive for his standards in a game where he had 13 targets against a burnable secondary.
Diggs appeared to get held on a couple of targets with no call from the refs. Diggs and Allen were also on the wrong page on a couple of different deep balls.
Diggs is still an every-week WR1 and will continue to be used as one in Week 15 against the Panthers.
Week 13
The wind heavily impacted the Bills’ ability to move the ball through the air on Monday Night Football against the New England Patriots.

Diggs was able to lead to Bills in targets, receptions, and yards against a tough Pats defense. Josh Allen tried to find him on a deep ball that would have been a TD, but it appeared the wind caused the ball to move too much for Diggs to bring it in. Diggs finished the night with 4 catches for 51 yards. His 7 targets were good for a 23% share.

Diggs carries rebound potential into Week 14 as our WR4 against the Bucs. The Tampa Bay secondary is still banged-up and has surrendered over 150 receiving yards to opposing WRs in 3 of their last 4 games.

After Tampa comes tougher passing matchups with Carolina and New England.
Week 12
Diggs was locked up with Marshon Lattimore most of the night, but he was able to produce a nice game for the Bills on Thanksgiving night against the Saints. He even beat Lattimore on the goal line with an incredible route that got him open for a TD in the 3rd quarter. Diggs led the team in targets, receptions, and receiving yards on a night where the Bills led from start to finish and didn’t have to call on the passing game for much production. Diggs finished with 7 catches (on 9 targets) for 74 yards and 1 TD. Diggs continues to be the top option in the Bills’ passing game and has 6 TDs over their last 6 games. We have Diggs ranked as our WR5 this week against the Patriots. The Patriots’ secondary has held their last four opponents WR groups to less than 100 receiving yards so it will be a tough battle for the Bills WRs. The next three games on the schedule for the Bills are NE, @TB, and CAR.

Week 10
Diggs finally had the game that made him so intriguing as the first WR off the board in fantasy drafts. He caught 8 of his 13 targets for 162 yards and a TD. This was only the 2nd time he surpassed 100 yards in a game.

The good news going forward is things are trending in the right direction, especially in the TD department. He has scored in 3 of the last 4 games for the Bills.

His floor is super safe, seeing 7 or more targets and 60 or more yards in all but 1 game this season. His upside is the moon with 150 or more yards and multiple TDs. Diggs should remain a strong performer this season with a monster upside on any given week.
Week 6
The biggest play of the night for Diggs was a 14-yard TD on a slant route in the 2nd quarter. He was leaned on in the first half with 6 targets before the break. He was also able to pick up a big pass interference penalty that set the Bills up for a short TD in the 2nd half. He is always a focal point for this explosive offense and a threat to take any touch to the end zone. Diggs led the team in receptions with 9 and targets with 11, good for a 23.4% target share. He finished second on the team in receiving yards on the night. He ended the night with 9 catches (on 11 targets) for 89 yards and 1 TD.
Diggs has continued to be a reliable fantasy option to this point, seeing double digit targets in 4 out of 6 games thus far. The Bills have a bye in Week 7. He has yet to put up a huge game to this point, but the schedule gets easier in Week 8. After the bye week, the Bills get a Dolphins secondary that has allowed over 580 receiving yards to WR and 5 TDs to WRs in the last 2 weeks. The next three games on the schedule following the bye week are MIA, @JAX, and @NYJ. Diggs is ranked as our WR3 for the rest of the season.
Week 5
Diggs caught 2 of 5 targets for 69 yards in the Bills' Week 5 win over the Chiefs.
Diggs was relatively quiet. He caught a 61-yarder in the first half but didn't do much besides that. Josh Allen only completed 15 passes as the Bills dominated defensively and hit a few splash plays on offense.
Diggs should have a monster game in Week 6 against the Titans and is a good buy-low candidate as he has had a slow start to the season.
Week 4
With the Bills controlling this game wire-to-wire, Josh Allen threw just 29 passes. But he threw 10 of those passes to Diggs, and the volume helped to get the WR on track after a slow start to the season. He turned in his first 100-yard game of the season. As always, Diggs was nearly impossible to cover, allowing the QB and WR to largely play pitch and catch. Unfortunately, he was unable to score a TD, as Dawson Knox caught both of the red-zone TDs.

After 4 games with a total of just 1 TD and 1 game with over 70 yards, Diggs has been a bit of a disappointment based on where he was drafted in the preseason. However, the fact he’s been targeted at least 10 times in 3 games means that volume should eventually lead to some of the big performances we’re used to seeing from him. However, with Emmanuel Sanders, Cole Beasley, and Dawson Knox being factors in the passing game, we may not see the weekly dominance Diggs displayed in 2020.
Week 3
Despite seeing 10 targets on Sunday in a monster Josh Allen performance, Diggs left something to be desired. He caught 6 of his 10 targets for 62 yards.

This was the 2nd time in 3 games that Diggs saw double-digit targets, which is a great sign. And Allen targeted Diggs when the Bills got into the red zone, but the TD never came.

Going forward, Diggs is still an elite WR for fantasy football. Volume is king and the production will begin to match. This offense has a multitude of weapons that can make it a bit frustrating week to week, including Emmanuel Sanders who was added before the season.

Better days are ahead. Enjoy the 60+ yards on 5+ each week even if his peak has yet to be reached.
Week 2
Game flow hurt Diggs here, as Buffalo raced out to a big lead. Still, the former Viking garnered 8 targets (a 24.4% share) and caught 4 for 60 yards and a score. The TD came on a throw-back across the field into the end zone, all made possible by Josh Allen’s mobility (and aggressiveness). Diggs also made a highlight-reel grab when he out-jumped Xavien Howard on a downfield ball. There's certainly no concern over Diggs as a higher-end WR1. Allen simply hasn't matched his 2020 level of play, although some regression was always likely. Next up is a home matchup with Washington.
Week 1
Diggs saw 14 targets against Pittsburgh — T-3rd most league-wide in Week 1. That mark also represented a strong 27.4% target share. Diggs even ranked 5th among WRs in air yards. He managed just 69 yards on his 9 catches, though, as Josh Allen failed to duplicate his 2020 level of play. Allen tossed just 1 score — a 3-yarder to Gabe Davis — but Diggs did see a pair of red zone targets. Even if Allen’s play takes a step back from 2020, Diggs should remain a clear WR1. Next up is a Miami squad he posted 8-153-1 and 7-76 against in 2020.

After a down 2019, Diggs rebounded in a major way in his debut season with Buffalo. Only 28 (in November), he’s poised to repeat a WR1 finish alongside Josh Allen.

Sure, you’re not drafting Diggs expecting a repeat of his 2020 totals. But we’d be surprised if he drops out of the top-10, barring an injury. Consider the 7th-year pro a solid Round 2 option.

Diggs back at practice

Bills WR Stefon Diggs (knee) returned to practice on Sunday. It was a "light practice," per WGR's Sal Capaccio, but Diggs appeared to be moving well. He had missed the previous week and a half, but we never got the vibe that it was a serious issue. We'll continue to keep an eye on Diggs, but he's safe to draft at this point.

Bills WR Stefon Diggs missed his 5th straight practice with a knee injury on Monday. Per The Athletic' Joe Buscaglia, HC Sean McDermott said he expects Diggs to miss more time but isn't worried about his status for the start of the season "at this point." We're not moving Diggs in the rankings right now but will keep a close eye on his status.

Bills WRs Stefon Diggs (oblique) and Cole Beasley (knee) are active for today's game against the Colts. Diggs was expected to play, but Beasley had been genuinely questionable. He carries attractive upside against an Indy defense that tends to funnel action to the middle in the passing game. Of course, he also carries some risk of re-injury or playing limited snaps. Keep both aspects in mind as you set your lineups for the Wild Card round.

Bills WR Stefon Diggs is "a go" for Saturday's playoff opener against the Colts, despite his oblique injury, according to NFL Network's Mike Garafolo. Expect to have Diggs available for fantasy lineups. Teammate Cole Beasley (knee) is also "confident" he'll be able to play through the knee issue that cost him Week 17. Garafolo reports, though, that the Bills will need to assess his condition before the game Saturday to determine his availability. Beasley figures to be a risky fantasy option even if he plays. We'll confirm the status on both wideouts when the inactives come out around 11:30 a.m. ET.

Bills WR Stefon Diggs (oblique) is listed as questionable for Saturday's Wild Card game vs. the Colts. He got in limited practices on Tuesday and Thursday, sitting out in between. We don't know much about this injury but would be surprised if it kept Diggs out this weekend. We'll see if we get any updates on his status between now and kickoff.