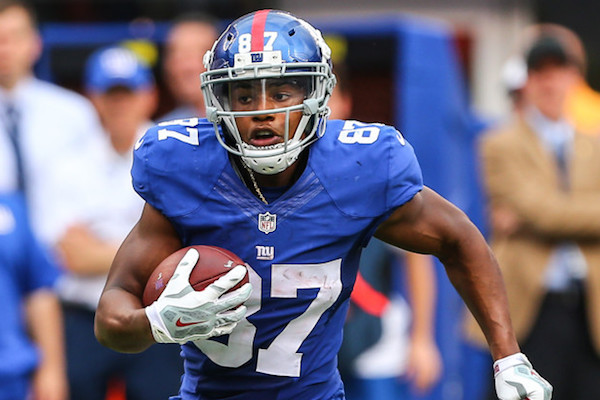 Week 8
Shepard caught 4 balls for 25 in the Week 8 loss to the Chiefs. He was targeted a team-high 7 times before leaving in the 2nd half with a quad injury. Shepard was trending toward another high-usage game before the injury.

Alas, another injury for the oft-hampered receiver. He missed 3 games already with a bad hamstring. We’ll see about the severity of this quad issue. A Week 10 bye could factor into the decision on whether Shepard tries to play in Week 9.
Week 6
Shepard emphatically returned to action with 10 receptions on 14 targets as the Giants were blown out at home against the Rams. Granted, he only amassed 76 yards, but he was the only offensive player that looked good on the day. He caught 34.4% of QB Daniel Jones’ completions.
Shepard had to step up as rookie WR Kadarius Toney left injured on the first drive. Jones went to Shepard whenever he needed to get things going. The receiving corps for the Giants are more than banged up with WRs Kenny Golladay, Darius Slayton and Toney all hurt. The long season continues for the Giants as they host a hungry Carolina team looking to break out of a 3-game losing streak. The Panthers secondary has given up some big yardage games so far, so there’s hope Shep can make things happen again.
Week 3
Shepard made two catches for 16 before exiting the 1st half in Week 3’s loss to Atlanta. The oft injured receiver pulled up lame with a hamstring injury and didn’t return. If the severity of the pull is anything like his previous injuries, he will be missing some time.

Week 2
Shepard produced another magnificent game with a 9-95-0 stat line on a team-high 10 targets. He picked up where he left off last week as QB Daniel Jones’ primary receiver, commanding the middle of the field and looking fresh in his route running. Shepard has been a PPR monster so far this year, but he hasn’t had many sniffs at the end zone so far. The way things are going, however, it looks like Jones is on radar lock and will be going to his veteran receiver when he needs to make a play. More good news: Shepard takes on a Falcons D that just allowed 5 passing TDs.

Week 1
Shepard impressed in the Week 1 defeat to the Broncos, finishing with a 7-113-1 stat line on 9 targets. He made a wonderful catch and stayed in bounds and tiptoed his way 37 yards down the sidelines for the first score of the season for the Giants, giving them a rare lead that wouldn’t last. He led all players in the game in receptions and yards, tying two others for most targets.
It was a turn-back-the-clock type of game for Shepard, who had only one 100-yard receiving game last year. It’s promising to see QB Daniel Jones look to him more than anyone else, and with the Giants likely throwing more than most teams, this could turn into a productive season. Assuming he stays healthy that is, which in of itself is a tough proposition.

We might not know exactly where Shepard will line up and how often until the regular season starts. The readiness of rookie Kadarius Toney figures to play a key role, as Toney looks like a prime candidate for slot work. But the Giants clearly like Shepard in a variety of spots. His playing time and usage remained up with the coaching change. Kenny Golladay’s arrival, however, means Shepard will probably need a teammate injury if he’s to snag the team target-share lead again. Shepard’s a fine PPR stash. But when you combine the new target challengers with a Giants offense that likely doesn’t want to pass at high volume, it’s tough to get excited about Shepard’s ceiling.

Giants WR Sterling Shepard tore his Achilles in Sunday's loss to the Cowboys, according to Dan Salomone. That ends Shepard's season and might impact his availability for the start of the 2022 campaign. We'll track his rehab this offseason.

Giants WR Sterling Shepard suffered a non-contact, left leg injury in the 4th quarter of Sunday's game vs. the Cowboys. He was carted off the field. We'll update his status when we know more, but this obviously looks like a serious injury.

Giants WR Sterling Shepard (calf) is active for today’s game vs. the Cowboys. At less than 100% and in a struggling offense, Shepard isn't a recommended Week 15 fantasy starter.

Giants WR Sterling Shepard (calf) is listed as questionable for Sunday's game vs. the Cowboys. It's a new injury for Shepard, who'd just returned from a quad. At less than 100% and in a struggling offense, Shepard isn't a recommended Week 15 fantasy starter.

Giants WRs Sterling Shepard (quad) and WR Kenny Golladay (rib) are active for today’s game vs. the Chargers. This will be Shepard’s first action since Week 8 and just his 6th game of the season. He’s averaged 8.6 targets per game, though, and is in the WR3 mix in PPR leagues.