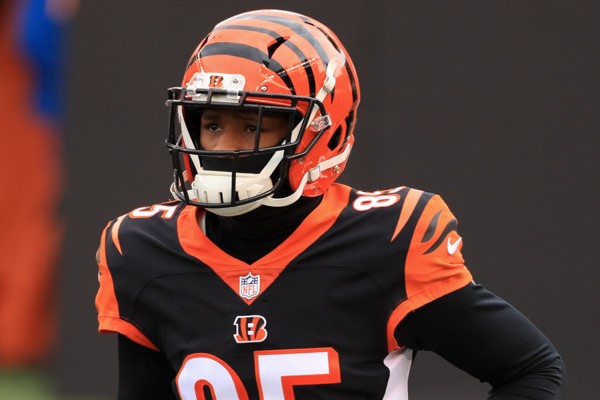 Week 13
Higgins continued to flourish alongside Joe Burrow. Interestingly, Higgins big game came after Burrow dislocated a finger on his throwing hand (on the first drive, no less). Still, he tallied 9-138-1 on a massive 14 targets (35% share). Higgins flashed his hops and wingspan on a deep end zone target. That marked his 2nd straight game with a TD, as he’s also now hit 100 yards in back to back outings. Zooming further out, the 2nd-year WR has hit 60+ yards in 5 of his past 6 outings. Keep him active for a Week 14 date with San Francisco.
Week 11
Higgins seemed to be the odd man out in this contest. With the Bengals leading throughout, Joe Burrow only threw 29 passes. In addition, with the Raiders having the best pressure rate in the league, the game plan centered around the team running the ball and throwing short passes. As a result, Higgins was 3rd on the team in targets, but that only resulted in 3 passes going his way. It was Tyler Boyd who fit the game plan perfectly, as he saw 8 targets, which was 1 fewer than Higgins and Ja’Marr Chase combined.

Aside from a couple of weak performances after returning from a shoulder injury in Week 5, Higgins has been an excellent floor play. Despite not scoring a TD in any of his last 5 games, he came into this game averaging 6 catches for 79 yards on 10 targets. And with defenses focusing on trying to slow down Ja’Marr Chase, Higgins should see favorable coverage, which could lead to more upside going forward.His remaining schedule isn’t great. Aside from next week’s matchup against Pittsburgh (No. 20 vs WRs), he’ll have 4 straight games against defenses in the top half of the league against WRs. That said, he should be a strong WR2 the rest of the way.
Week 9
Higgins caught 4 of 6 targets for 97 yards in the Bengals' Week 8 loss to the Jets.
Higgins had just 6 targets in a game in which the Bengals were losing the entire time. Higgins still produced 97 yards but is still struggling with drops as he almost came down with a 40+ yard play that hit his hands and another in the end zone. He seems to really struggle to catch the ball with defenders around him as they tend to knock it out of his hands in contested situations.
Higgins has been seeing consistent volume in a pass-heavy offense, which keeps him in play as an every-week WR3 with WR2 upside.
Week 8
Higgins got off to a hot start to the season, catching a TD in back-to-back games before his injury. Since his return to the lineup, Higgins has failed to find the end zone in 4 straight games. The good news for fantasy managers is Higgins hasn’t fallen below 6 targets yet this season. This has helped his production rise every week since his return from injury. Week 8 Higgins had a season high 97 receiving yards and hit double digit fantasy points in half-PPR for the first time since Week 2. This is a good sign for things to come as Higgins just the prior week had 15 targets vs. Baltimore.
In Week 9 the Bengals take on a struggling Browns secondary that has allowed big performances to outside WRs over the past few weeks. Higgins has yet to break out since his return to the lineup, but this week could be the week that Higgins finally cracks the top 24 WRs again.
Week 7
It’s tough to get noticed in the same offense as Ja’Marr Chase, when the rookie is running around, over and through the Ravens for 201 yards. But Higgins actually beat his teammate by 5 targets at Baltimore, catching just 7 of his 15 looks for 62 yards.

Higgins hasn’t scored in 3 games since returning from his shoulder injury and ranks just 41st at the position in PPR points over that span. But his 28 targets over those 3 weeks tied Davante Adams for 7th among WRs and edged Chase by 2. For the season, Higgins is averaging 8.6 looks per game to Chase’s 7.3 and Tyler Boyd’s 6.4.

None of that is to say Higgins belongs close to Chase in fantasy outlook right now. But he’s probably more attractive going forward than his PPR total of the past 3 weeks would suggest. Higgins has even matched Chase for the team lead with 4 end-zone targets so far, despite missing the 2 games.
Week 6
Higgins caught 3 balls for 44 scoreless yards in Sunday’s win over the Lions. We noticed him on the sidelines quite a bit in the 2nd half, likely because he’s still working back from that shoulder injury and Cincinnati was coasting to an easy win. Higgins ended up playing just 57% of the Bengals’ offensive snaps.

The good news is that Higgins tied for the team lead with 6 targets -- a decent 20.7% share. He’s now averaging 7 targets across his 4 games this season. That’s actually slightly more than Ja’Marr Chase’s 6.8 targets in those 4 games.

Chase, of course, has been much more productive. But expect the pendulum to swing back in Higgins’ favor soon, assuming that shoulder isn’t an issue.
Week 5
After missing a pair of games with a shoulder injury, Higgins played 70% of the snaps, which is a bit less than he had seen in the other 2 games he played this season. With the Packers pressuring Joe Burrow, Higgins was an outlet for him, catching mostly short passes that didn’t lead to much yardage after the catch, leading to his 1st game with fewer than 58 yards, though he was able to convert on a 2-point conversion to add a bit to his fantasy totals.

Although this was a bit of a disappointing game for Higgins, he averaged 59 yards and a TD in the first 2 games of the season, so he’s clearly going to be involved the rest of the way. In the first 2 games of the year when Higgins was healthy, he had out-targeted Chase 15-11, though it seems as if Chase is seeing more of the downfield targets. Regardless, Higgins has shown to be very solid in the red zone, so he’ll have an excellent scoring floor, and he may have his better games against the tougher defenses with strong pass rushes, which could limit the downfield passing.
Week 2
Higgins saw a team-high 10 targets in Sunday’s loss to the Bears, catching 6 for 60 yards and a score. It was his second straight week producing at least 58 yards and a TD.

Going forward, Higgins should be the most reliable option in this passing attack. His 15 targets through two games lead all Bengals pass catchers. Ja’Marr Chase may see more splash plays that end up in highlight reels, but Higgins is the one you will feel best about utilizing each and every week. This is not to say that he doesn’t have the big play ability, of course.
Week 1
Higgins enjoyed a nice opener -- and almost enjoyed it even more.

His 2-yard TD catch in the 2nd quarter followed a 26-yard defensive pass-interference penalty Higgins drew against CB Bashaud Breeland. Higgins later set up Joe Mixon’s 2-yard TD run when he got knocked out at the 2-yard line on a 14-yard, 3rd-quarter catch.

Overall, Higgins drew 5 official targets, catchin 4 for 58 yards and the TD. We’d like a little more than 18.5% target share for Higgins, but the DPI play would have put him at 21.4% had it counted.

The only concern here is a Bengals offense that turned in the league’s lowest situation-neutral pass rate in Week 1 -- crazy low at 34.6%, according to RBSDM.com. Cincinnati is sure to come up from that, but remaining near the bottom of the league in that category would limit the available target volume in a crowded WR corps.

In 2018 and 2019, Higgins produced big-time totals at Clemson alongside Trevor Lawrence. He parlayed that into immediate success as a big-bodied outside target for Joe Burrow.

Ja’Marr Chase brings serious target competition, but the Bengals should continue to lean pass after registering a nearly 59% pass rate in 2020. The key here is the health of Burrow, who’ll be less than 10 months removed from tearing up his knee come Week 1.

Barring a Burrow setback, though, Higgins will profile as a WR2/3.

Bengals WR Tee Higgins (foot) remained limited in Thursday's practice but isn't listed on the final injury report. We'll keep an eye on the situation, but it looks like Higgins will be ready for his usual role in Saturday's Wild Card game vs. the Raiders.

Bengals WR Tee Higgins was added to Wednesday's injury report with a foot and limited in practice. That might mean he got hurt the foot today. We'll see what he does on Thursday and how he's listed on the final injury report for Saturday's Wild Card game vs. the Raiders.

Bengals WR Tee Higgins (ankle) is active for today’s game vs. the 49ers. He got in limited practices on Thursday and Friday. Higgins probably won’t be at 100% today but remains an upside WR2 play.

NFL Network's Ian Rapoport confirms that Bengals WR Tee Higgins (ankle) is expected to play vs. the 49ers today. Higgins got in 2 limited practices this week after tweaking his ankle last Sunday. He comes with a bit more risk in Week 14 fantasy lineups but remains a WR2 with upside.

Bengals WR Tee Higgins (ankle) is listed as questionable for this weekend’s game vs. the 49ers. He got in limited practices on Thursday and Friday, and HC Zac Taylor confirmed that Higgins is expected to play on Sunday. He can be penciled into fantasy lineups.