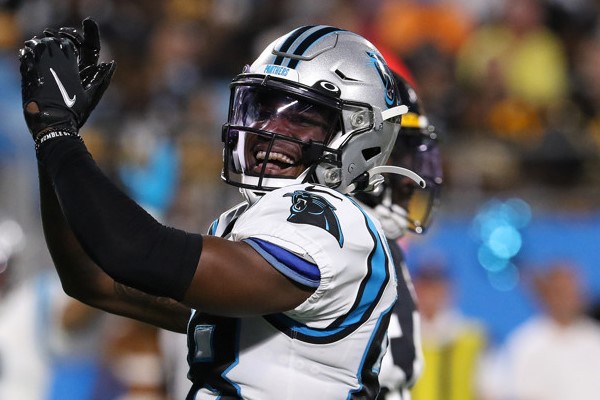 Week 5
The rookie has done nothing of note statistically through 5 games. But it does seem worth noting that Marshall set a new high in snap share for the 3rd straight week Sunday against Philadelphia. The rookie’s route rate vs. Sam Darnold dropbacks has increased. Here are the weekly rates:

We should mention that the past 3 games have coincided with Christian McCaffrey leaving early and then twice being inactive. So it’ll be interesting to see if Marshall’s playing time reverts with McCaffrey back in the lineup.

Marshall is certainly not a player you should cling to in common redraft formats. But there’s some upside for deeper leagues, especially with the Robby Anderson plan still not working.
Week 1
It was a game of just-misses for Marshall in Week 1. He almost came down with an impressive grab on a back-shoulder throw on Carolina’s 1st possession. He had an end zone target sailed over his head. And there was a designed screen to Marshall in the red zone that was stopped short of the goal line.

The rookie finished with 3 catches for 26 scoreless yards. But his debut was more encouraging than that box score. Marshall’s 6 targets ranked 3rd on the team and were a 17.1% share. He played 53% of the snaps and ran a route on 65% of pass plays.

Marshall is Carolina’s #3 WR based on playing time. But that usage is enough to make him a viable spot-start option, especially when bye weeks start to hit.

We’re high on Marshall’s talent long-term — as long as he can keep leg/foot issues at bay. He brings an excellent blend of size and athleticism in the same vein as Courtland Sutton.

The rookie’s blocked from a major 2021 role, barring an injury to DJ Moore or Robby Anderson. But a 2022 breakout is certainly in play for the 21-year-old.

Panthers WR Terrace Marshall sustained a concussion in Sunday's loss to the Vikings. We'll track his progress through the protocol, but the rookie isn't on the redraft radar.

The Panthers added LSU WR Terrace Marshall with the 59th overall pick of the 2021 NFL Draft. Marshall brings an elite combination of size and athleticism. He checked into his Pro Day at 6’3, 205 pounds and ran a 4.40-second 40-yard dash with a 39-inch vertical. It earned him a 97th percentile Relative Athletic Score. He was stuck behind Justin Jefferson and Ja’Marr Chase for his first 2 seasons at LSU but did well to come away with a 46-671-13 line in 12 games as a sophomore in 2019. With Jefferson off to the NFL and Chase opting out this past year, Marshall emerged as the top dog, averaging 6.9 catches, 104 yards and 1.4 TDs per game. (He missed the Alabama game with an injury and opted out of the final 2.) He soaked up 27.6% of LSU’s catches, 33.3% of the receiving yards and 58.8% of the receiving scores in his 7 games. Marshall is a bit raw as a route runner and has some drop issues. But he plays as athletically as he tested, winning downfield and after the catch with speed and out-jumping DBs for 50/50 balls. Marshall also has extensive experience both outside and in the slot. NFL Network’s Daniel Jeremiah reported last week that some concerns popped up for Marshall at the medical check in Indianapolis after he broke his left fibula as a high school senior and suffered a fractured left foot in 2019. There’s plenty of bust potential here. But Marshall has the upside to develop into 1 of the top WRs in this class. “He’s got a chance to be like a Brandon Marshall-type player,” a scout told The Athletic’s Bob McGinn. This is a sneaky good landing spot in Carolina. There’s a clear path for Marshall to be the #3 WR this year. And WR Robby Anderson will be a free agent next offseason.