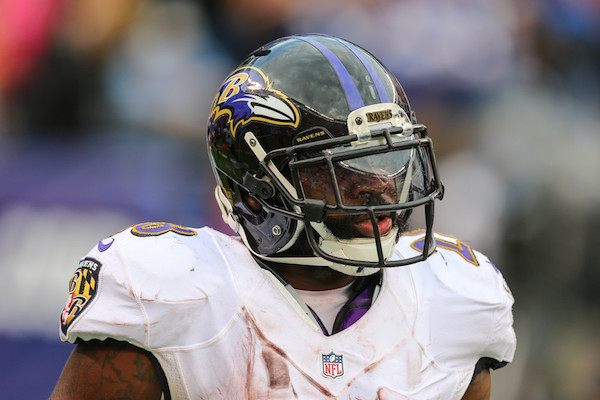 The Saints have released RB Terrance West. He lasted just a couple of months with the team, carrying 7 times for 36 yards in 2 preseason games. RB Jonathan Williams seems to have emerged as the favorite for #2 RB duties during Mark Ingram's suspension. He was the 2nd RB into last weekend's preseason game (Alvin Kamara didn't play) and finished with 37 yards on 8 carries.

The Saints on Wednesday agreed to a deal with RB Terrance West, according to NFL.com’s Herbie Teope. The move followed a tryout that reportedly included multiple veteran backs — plus DeMarco Murray declining an invitation. West has averaged a mere 3.9 yards per carry career and appeared in just 5 games last season for a Ravens offense seeking backfield answers. New Orleans clearly felt the need to tap a veteran to help fill the early Mark Ingram void. We’ll see if West can work his way into fantasy relevance. If nothing else, he’s in the right place for it.

Ravens RB Terrance West is inactive for today’s game against the Packers. He put in a full week of practice after missing time with that calf injury, so it looks like West is a healthy scratch. It’ll be Alex Collins, Danny Woodhead and Buck Allen in Baltimore’s backfield.

Ravens RB Terrance West (calf) is listed as questionable for Sunday’s game against the Packers. He put in a full week of practice, so he should be ready to go physically. But it’s unclear if has a spot on the active roster if RB Danny Woodhead is ready to play. West remains off the fantasy radar for now.

Ravens RB Terrance West (calf) put in a full practice on Wednesday. It looks like he's ready to return after missing the past 5 weeks. But it's entirely unclear what kind of role West will be returning to. He might not even be active if RB Danny Woodhead (hamstring) is ready to play.

Terrance West, RB UNS There is no dynasty data for this player.