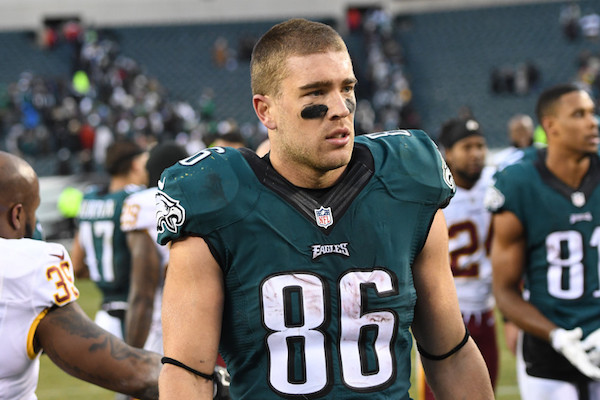 Ertz remains a trade candidate this summer. If he stays in Philly, he’ll likely head into his 9th season as the #2 TE. That marks a steep fall for a guy who was going top-5 at the position in 2020 drafts, but it wouldn’t be a death sentence. HC Nick Sirianni brings a TE-friendly past, and Philly’s shallow WR corps -- with unproven youngsters atop the depth chart -- increases the target opportunity for the TEs. Ertz looks solid as a late TE3 in best-ball drafting right now. At worst, he’ll be the 2nd TE in a positive situation for opportunity. There’s handcuff upside in case of another Goedert injury, and potential for a big boost if Ertz gets traded. We’ll see how/whether his situation changes as we move into and through summer.

Eagles GM Howie Roseman said Wednesday that he expects TE Zach Ertz to be on Philly's roster when the season begins, according to ESPN's Tim McManus. We wouldn't expect to hear anything different from Roseman, regardless of where trade talks might be on the veteran player. The fact that Ertz hasn't gone anywhere yet, though, means we should draft as though Ertz will be an Eagle come Week 1. His continued presence would certainly affect Dallas Goedert's fantasy ceiling, but we expect the younger TE to emerge as Philly's clear leader at the position this season. Even if their target counts sit close together, Goedert is the much better bet for a deeper average target depth and for yards after the catch.

Eagles insider Howard Eskin hears that there's now a "great chance" TE Zach Ertz will be on the team for the "start of the season." That last part is noteworthy because it leaves open the possibility of an in-season trade. Still, Ertz sticking around for any number of games would hurt TE Dallas Goedert's fantasy value. In their 7 shared games together last year, Ertz out-targeted Goedert 45 to 42. We'd expect that to swing in Goedert's favor in 2021. But his chances of finishing near the top of his position in targets would be slim with Ertz to contend with.

Ertz not reporting for offseason program

Eagles TE Zach Ertz didn't report for voluntary workouts on Monday and isn't expected to take part in the offseason program, according to insider Jeff McLane. He knows he's not part of the team's 2021 plans and is waiting until he's traded or released. The Eagles have seemingly been looking to trade him for a few months but haven't found any takers. Ertz is still just 30 but is coming off an ugly 2020 season that saw him rank 31st in yards per route run and 30th in Pro Football Focus receiving grade among 34 TEs with 40+ targets. We'll see where he ends up, but Ertz isn't an attractive draft target right now. Meanwhile, we've already projected Eagles TE Dallas Goedert as if Ertz is gone.

Ertz given permission to seek trade

The Eagles have given TE Zach Ertz permission to seek a trade, according to NFL Network's Ian Rapoport. The relationship between these 2 sides has been cold since they refused to agree to a contract extension last summer. Ertz didn't do his trade value any favors by missing 5 games and averaging just 30.5 yards in the other 11 last season. The 30-year-old looked like a guy running out of gas. We'll see where the situation goes, but consider Ertz just a low-end TE2 in fantasy drafts for now. TE Dallas Goedert, meanwhile, will be a good bet for new career highs in 2021 if Ertz departs.

Ertz likely to be limited in Week 13 return

Eagles TE Zach Ertz (ankle) is expected to return for Sunday’s game against the Packers. HC Doug Pederson said Friday that he’ll “have to be smart” with how much Ertz plays. In something less than a full-time role, Ertz isn’t a viable Week 13 fantasy play.