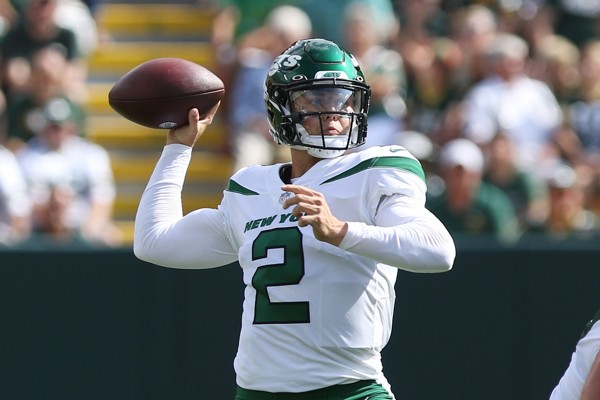 Week 13
Getting Wilson going earlier in games was a stated goal for the Jets heading into Sunday’s meeting with the Eagles, and they achieved it.

A big game-opening kick return by Braxton Berrios set the Jets up on the cusp of the red zone, which helped. But Wilson quickly capped that drive with a TD toss to Elijah Moore. He added a 1-yard TD plunge and then a 1-yard TD throw to TE Ryan Griffin before the break.

It’s not enough to make Wilson a stronger fantasy option through the end of this season, but perhaps it was a sign of progress for the rookie QB.
Week 12
Wilson returned from his knee injury as the same erratic performer and fantasy producer we saw earlier this season.

He completed 14 of just 24 attempts for 145 yards in Sunday’s win over the Texans, logging 0 TDs and 1 INT. For the season, Wilson ranks 2nd worst in Pro Football Focus’ turnover-worthy play rate among QBs with 100+ dropbacks. The only guy with a higher rate … Mike White.

Wilson did run for a TD against Houston, but he also took 4 sacks. There’s still room for the rookie to enjoy a nice career and become a fantasy factor, but he’s well off the 2021 redraft radar.
Week 5
Wilson took a step back in Week 5 with 192 yards and an INT on 19-of-32 passing. He hooked up with 8 different receivers but none had more than 4 catches.

Through the 1st half, Wilson had just 5 completions for 42 yards and the INT. By the time they managed to put points on the board, it was already 17-0.

Wilson looked much better when they went to the hurry-up offense, and for a short time in the 4th quarter, the Jets were within 3 points. Wilson still makes rookie mistakes—up to 9 INTs already—but he has the arm talent to be a starter. Hopefully the much-needed bye week will help.
Week 4
Wilson has had rookie growing pains this season, but he had his best game of the year in week 4. Wilson completed a season-high 62% of his passes for 297 yards and 2 TDs. This marked the first time in his young career where he hit 60% completion rate and 260 yards in a game. Even prior to last week Wilson has looked his best when challenging defenses downfield. In week 4 he completed 4 of 5 passes for 165 yards and 1 TD when attempting a pass of 20+ yards. This vertical style of Wilson’s game will make him boom or bust, but his willingness to challenge defense will make him QB steamer in good matchups.
Heading into Week 5 the Jets have an interesting matchup as they take on the Atlanta Falcons. The Falcons have allowed the 2nd most points this season to QBs. This includes 30-point games to Jalen Hurts, Tom Brady and Taylor Heinicke. This matchup puts Zach Wilson on the QB2 radar for Week 5.
Week 3
The Jets and Wilson remain a mess. The rookie QB completed just 19 of 35 passes for 160 yards and 2 INTs. Wilson has at least 1 INT in every game and has racked up 7 on the season.

He only ran 1 time for 2 yards. This is frustrating to see for a QB who flashed the ability to scramble and gain yards with his feet last season at BYU. For a QB having so many issues, adding this element to his game may make things easier.

Going forward, the only thing fantasy managers should care about is using a fantasy defense against Wilson. The Titans are up this week. Make Tennessee a priority add this week if you need help at DST.
Week 2
Wilson completed 19 of 33 passes for 210 yards and 4 INTs while adding 3 rushes for 19 yards in the Jets' 25-6, Week 2 loss to the Patriots.
The rookie had a game to forget as he was sacked 4 times and had 4 turnovers against a Patriots defense that was confusing him all game. Wilson's first two passes of the game were picked off on poor decisions trying to force the ball into tight coverage. 2 of his INTs hit off of Corey Davis’ hands, but he easily could have been picked off several times.
Wilson has flashed a little bit of upside at times so far but is still making too many mistakes and has another difficult matchup on the road next week against the 2-0 Broncos.
Week 1
Wilson was under constant duress from the Panthers defense throughout his debut. Pro Football Focus charted pressure on 51.2% of Wilson’s drop backs. That was 2nd highest among 32 QBs with 10+ drop backs in Week 1. And the rookie struggled when pressured, completing just 5 of 16 passes.

The situation doesn’t project to get better anytime soon, especially after the Jets lost LT Mekhi Becton for the next 4 to 6 weeks to a knee injury. Simply put, it’s going to be tough for Wilson to produce as a reliable fantasy starter in the short term.

We did like what we saw from him in the opener, though. He displayed plus arm strength and playmaking ability outside of structure. Both assets were on display on his 1st TD, when Wilson escaped the pocket and fired a dart on the run to WR Corey Davis. Wilson’s 2nd TD was a perfectly timed throw to Davis on an out route.

The long-term outlook here is bright. But Wilson is no better than a low-end QB2 in fantasy right now.

Wilson came out of nowhere to post a huge 2020. While poor competition helped, Wilson simply dominated with his ability to put the ball where it needs to be both inside and outside of the pocket.

So the future looks bright here. But as a rookie playing under a new coaching staff — in a division with 3 strong defenses — we’re keeping 2021 expectations low.

Jets QB Zach Wilson will start Sunday's game vs. the Texans, The Athletic's Connor Hughes reports. In related news, QBs Joe Flacco and Mike White were both placed on the COVID list on Tuesday. QB Josh Johnson will back up Wilson this weekend. It'll be the rookie's first action since hurting his knee back in Week 7. He's largely struggled this year and can't be trusted in fantasy lineups.

Jets QB Zach Wilson is expected to miss 2 weeks with a "minor" PCL sprain, according to NFL Network's Ian Rapoport. It's relatively good news on what looked like a more serious injury. Wilson, of course, has not been a fantasy factor this season. But backup QB Mike White is a downgrade for the offense.

Jets QB Zach Wilson will "likely miss time" with his knee injury, per NFL Network's Ian Rapoport, "but the tests will determine how much." Rapoport adds that Wilson is believed to be dealing with a PCL injury. We should learn more after the rookie's MRI. Backup QB Mike White went 20-of-32 for 202 yards, 1 TD and 2 INTs in relief of Wilson in New England.

Jets QB Zach Wilson left Sunday’s game with a lower-body injury. He walked to the locker room around the midway point of the 2nd quarter. We’ll share an update when we learn more.

Update: Wilson has a right knee injury, the team announced. He's been ruled out.

Jets QB Zach Wilson has made big strides from spring workouts to now, The Athletic's Connor Hughes writes. "He has a much firmer understanding of the playbook and is much more comfortable within this scheme," Hughes says. "That’s allowing his athleticism and passing ability to shine." Wilson has looked good this preseason, especially when completing 9 of 11 passes for 128 yards and 2 scores vs. the Packers last week. (And he did that without WR Elijah Moore.). Wilson certainly looks capable of emerging as a spot-start fantasy option as a rookie.