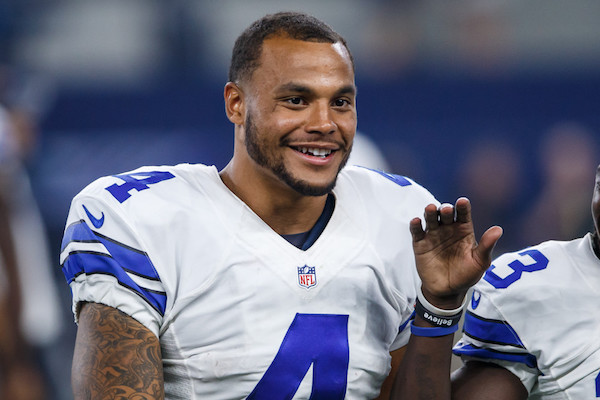 Cowboys HC Mike McCarthy said Monday that his team will play its starters in Saturday night's regular-season finale at Philadelphia. "We're going to line up to do what we need to do to win the game," McCarthy told reporters, according to The Athletic's Jon Machota. We wouldn't be shocked if RB Ezekiel Elliott gets the night off to rest his knee, or if the Eagles decide to rest starters and thus present a light challenge. For now, though, you should assume that any active Cowboys on your fantasy football roster will be going in Week 18.

Cowboys QB Dak Prescott (calf) is not listed on the final Week 9 injury report. He put in full practices on Thursday and Friday. ESPN's Ed Werder reported Thursday that the Cowboys have an "unlimited" game plan for Prescott vs. Denver this weekend. He’s safe to get back into fantasy lineups.

ESPN's Ed Werder reported on NFL Live that the Cowboys have an "unlimited" game plan for QB Dak Prescott (calf) this week. Werder said that means the team will take full advantage of Prescott's mobility outside the pocket. Dallas played it extremely safe with this calf injury, so we're not expecting Prescott to be at all limited vs. Denver on Sunday.

Prescott on track for Week 9 return

Cowboys HC Mike McCarthy confirmed that QB Dak Prescott (calf) is expected to be a full-go in Thursday's practice and play vs. the Broncos on Sunday. We'll continue to monitor his status, but Prescott can be penciled into Week 9 fantasy lineups.