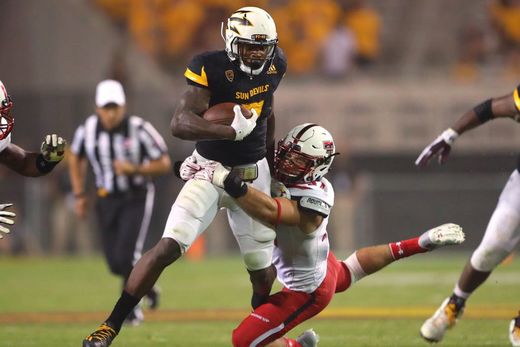 Ballage chose Arizona State over offers from many other FBS programs, including Nebraska, Washington, UCLA and home-state Colorado. That came after he exploded as a high school senior, racking up 1,943 yards and 25 TDs on 206 carries plus 360 more yards and 6 TDs on just 16 receptions. Rivals.com ranked him the 6th-best “athlete” prospect in the nation.

Ballage saw minimal usage as a college freshman, but did appear in 12 of 13 games -- primarily as a goal-line back.

As a sophomore, he didn’t register a touch in the season’s 1st 3 games. Ballage then averaged 12.5 carries over the final 10 contests, cracking 80 yards on the ground in 4 straight conference games from late October through mid-November. That included his 1st 2 outings of 100+ yards.

Ballage drew double-digit carries in the 1st 3 games of his junior season, including his FBS-record-tying 8-TD performance against Texas Tech. But after 10 total TDs and 37 rushing attempts over the 1st 3 weeks, Ballage averaged just 9.9 rushes over the final 9 contests. He managed only 3.2 yards per carry over that span but added 359 yards on 35 receptions (10.3 per catch).

HC Todd Graham and OC Billy Napier each said he wanted to get Ballage more touches in 2017, but the senior got his hands on the ball just 7 more times on offense than he had in 2016. That did include 31 more carries than the previous year, but Ballage dropped from 17.3% of the team’s receptions to just 7.6% in his final campaign.

The Sun Devils snapped to him as a Wildcat QB 70 times over the past 2 seasons, but Ballage averaged only 4.3 yards per rush after going for 5.2 as a sophomore. Backfield mate Demario Richard, by comparison, topped 5.0 per rush every season while beating Ballage in carries in each of their 4 years.

Pro Football Focus assigned Ballage declining grades each of the past 2 years compared with his career-high sophomore-year mark. He also ranked 73rd among this year’s draft-eligible RBs in Elusive Rating, 67th in Breakaway Percentage, 60th in percentage of carries extended beyond 1st contact -- even 66th in yards per route run.

There’s some fun stuff in the Ballage tape, but the Internet also provides just a series of quick cut-ups. That’s because the big guy averaged just 9.8 carries career, 11.7 per contest over his final 3 seasons.

His record-matching game against Texas Tech wasn’t nearly as electric as the stat line, but this run early in the contest shows some burst, balance along the sideline and then power at the 2nd and 3rd levels …

Ballage did step out before finishing off that run but later scored on that drive.

The red-zone work proved particularly important to his college profile, especially given Arizona State’s propensity for running him as a Wildcat QB near the goal line.

And here’s more of the same from an actual RB starting point against Oregon, plus the vision to find the outside lane to the end zone …

Ballage has developed a friendship with the NFL’s pope of patience, Le’Veon Bell, and points to the Steelers back and David Johnson as players he seeks to emulate.

We’re certainly not going to set our expectations there, but there are plenty of traits to like. How about a guy who tested just 37th percentile among RBs in the vertical hurdling completely over a would-be tackler?

And most important might be the receiving ability that stands the best chance of getting him onto an NFL field early. Ballage showed well as a receiver in Senior Bowl practices and delivered plays like this as a Sun Devil …

There were few samples of him running WR routes and he rarely -- if ever -- lined up outside of the backfield in the games I watched. But that’s an amazing adjustment. Ballage not only adjusts to catch a ball thrown very low and behind him, but he transitions almost seamlessly to advancing upfield and winds up with a long gain.

We'll see if his next coaching staff views Ballage as a similar goal-line factor. The tall back might run a bit too upright for some coaches.

Both Ballage and Kamara saw limited rushing work in college, despite not sharing their backfields with premier runners. It’s certainly fair to wonder why Ballage couldn’t overtake Demario Richard in any of their 4 shared seasons, and to view that as reason to distrust his pro outlook. But it’s also fair to question whether his college staff just screwed up in the way it used him.

Ballage was voted a captain senior year by teammates, pointing to his maturation. And here’s what 2017 OC Billy Napier -- who spent just the 1 season with the Sun Devils -- said about Ballage heading into last season:

“I think he’s an elite skill player. He’s one of the best skill players in the entire country. I think he’s another guy that has kind of come into his own in terms of he’s recognized the level of work that’s required to be exceptional. Obviously, I would like that guy’s work load to be really big. I want to have a guy who shows up every week, prepared and plays a large number of snaps, I’m going to ask a lot of that guy. I think he anticipates that, we’ve had those talks. I think his preparation, his offseason has probably been the best he’s had, he’s in the best shape of his life and he’s another guy who in his own personal battles he’s coming to grips what it’s about to be a man, take ownership, be accountable, be dependable. For the guy to get voted captain by his teammates I think says a lot about his growth this offseason.”

So why decrease his receiving share and keep Ballage clearly behind Richard while less-clearly ahead of #3 RB Manny Wilkins? Perhaps teammates commanded more work. Or perhaps the ASU coaches screwed up.

We won’t really know until Ballage gets onto an NFL field. Here’s a table that doesn’t offer much encouragement while displaying drafted RBs over the past 6 years with similar college carry profiles:

But that group also shows how tough it is to find a true comp for Ballage. Only a handful of those runners approach his size-speed combo. Just 2 players in the list matched Ballage in weight. Of the 6 who beat his 40 time, 4 weighed in at least 20 pounds lighter than Ballage. And only Keith Marshall beat Ballage’s Speed Score.

Among this year’s RB class, meanwhile, Ballage ranked 6th in career receptions out of the 32 guys invited to the Scouting Combine. He checked in just 23rd in yards per catch, though, and 29th in yards per carry.

Don’t fall in love and jump too early. But there’s plenty of room for risk-taking in dynasty rookie drafts. And a 3rd-round pick seems like a fairly small price to pay for this potential lottery ticket. Ballage might even work into late Round 2. Landing spot figures to matter quite a bit in this case.