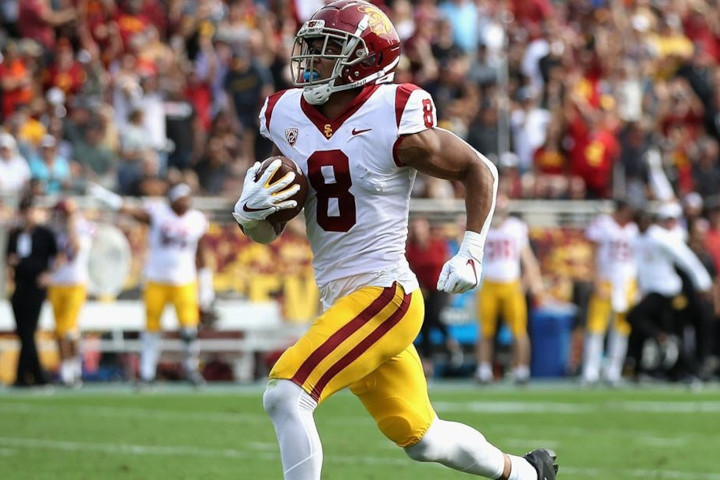 Equanimeous’ brother, Amon-Ra St. Brown was a 5-star recruit and the #2 WR prospect in the 2018 class. He tallied a big 72-1,320-20 line as a senior at Mater Dei High School in California, despite missing some time with a hand injury, and was named a First-Team All-American by USA Today and Max Preps.

St. Brown’s raw numbers climbed across the board as a sophomore -- although his market shares sunk to 21.1% of the catches, 23.9% of the yards and 17.1% of the TDs. In his defense, St. Brown was battling for targets with Pittman, a senior and eventual 34th overall pick of the 2020 NFL Draft. But St. Brown also finished with similar numbers as Tyler Vaughns, who decided not to declare for this spring’s draft as a redshirt junior.

With Pittman out of the way this past year, St. Brown led the Trojans in catches and receiving scores in an abbreviated 6-game season. Sophomore WR Drake Jordan, though, edged out St. Brown with 502 yards. And his market shares remained middling: 23.0% of the catches, 24.9% of the yards and 41.8% of the TDs.

St. Brown is at his best in contested situations. He has nice hops and timing to win jump balls and is comfortable making plays with defenders on his back.

St. Brown is often forced to make plays in tight coverage, though, because he doesn’t create much separation. There’s very little suddenness or burst to his routes.

He plays with more athleticism after the catch, displaying some slipperiness and tackle-breaking ability.

Although he’s good in contested situations, St. Brown has lazy hands at times. He dropped 5 balls in the 5 games I watched.

St. Brown had a strong freshman season at USC but didn’t really progress from there. Although he’s still just 21 years old, it’s possible he’s already near his ceiling. He’s not particularly big, and he’s just an average athlete.

St. Brown’s ball skills don’t figure to be as big an asset at the next level, so he’ll need to become a more effective route runner. I’m just not sure he has the physical tools to do it.

Medicals are also worth monitoring here. St. Brown suffered a hand injury as a high school senior, sprained the AC joint in his shoulder in 2018 and 2020 and needed sports hernia surgery after the 2019 campaign.

We’ll see what the NFL thinks of St. Brown, but he looks like a low-upside, late-round pick in dynasty rookie drafts.