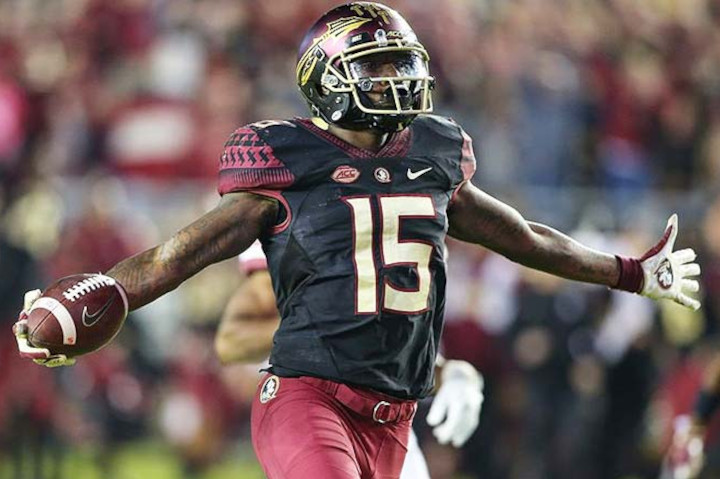 Terry was a 4-star recruit and a top 50 WR in the 2017 class, according to most scouting services. He opted to enroll at Florida State over offers from Florida, Georgia, Auburn and Ole Miss.

Terry was redshirted in 2017 but made an immediate impact the following fall, hitting breakout thresholds with 23% of the Seminoles’ receiving yards and 40% of the TDs. He led that team with 8 receiving scores. The 744 receiving yards tied for the team lead and set a new school freshman record. Terry’s big 21.3 yards per catch ranked 5th in the nation among players with 30+ grabs.

His numbers jumped in 2019. Terry ranked 16th in the country in receiving yards and tied for 32nd in TDs. He easily led Florida State in all major receiving categories, accounting for 21.5% of the catches, 31.4% of the yards and 37.5% of the TDs. Terry was a big-play machine once again, averaging 19.8 yards per catch and scoring 6 TDs of 60+ yards.

But 2020 was rocky. Terry got off to a slowish start under a new coaching staff, with 6 catches for 129 scoreless yards over his first 3 games. He erupted for a 9-146-1 line in game #4 vs. Notre Dame. But then he underwent arthroscopic surgery on his left knee in mid-October. Terry missed the next 2 games and caught 2 balls for 14 yards in his return to action. Then he left the team after having “multiple run-ins with the coaching staff,” per ESPN’s Andrea Adelson.

Terry has flashes of dominance on tape. At 6’3 with 4.4 speed, he was too big and fast for a lot of the college DBs he faced.

He has the juice to beat guys downfield, tracks the ball well and is comfortable in traffic.

Terry also has a nice combination of speed, power and elusiveness with the ball in his hands.

There are holes to Terry’s game, though. A large chunk of his catches at Florida State came on deep balls and screens. He’s not a great separation creator, struggling to change direction and get out of breaks. That subpar agility was confirmed by his 22nd percentile 3-cone time and 6th percentile short shuttle at his Pro Day.

Terry also has trouble getting off press coverage. (Watch the Miami game.)

Finally, his hands are a bit worrisome. He posted a fine 7.4% drop rate over the past 2 seasons but sometimes looks like he’s fighting the football.

Terry’s combination of size and speed should translate to the next level. Throw in the contested-catch ability, and his ceiling extends somewhere near Alshon Jeffery level.

His inability to create separation on short and intermediate routes against college DBs is a concern, though. Perhaps he’ll improve as a route runner, but he likely doesn’t have the movement skills to ever become a plus in that department.

It’s also worth noting that Terry is already 23 years old, so there’s probably less room for growth in his game than most incoming rookies.

There’s enough upside here to make Terry worth a look near the end of dynasty rookie drafts. (It's never a bad idea to target big, fast dudes.) But he also carries significant bust potential.