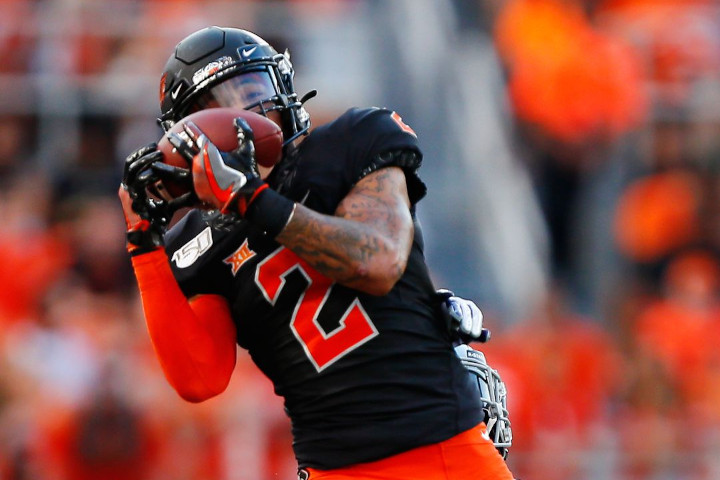 Wallace racked up 3,760 career receiving yards at South Hills -- a top-15 mark in Texas high school history. He was a 4-star recruit and a top-20 WR in the 2017 class according to most scouting services. Wallace chose Oklahoma State over at least 15 other schools, including Oklahoma, Michigan and Notre Dame.

He played in all 13 of the Cowboys’ games as a true freshman but totaled just 7 catches on a team led by WRs James Washington and Marcell Ateman.

Then came a massive sophomore breakout. With Washington and Ateman out of the way, Wallace easily paced Oklahoma State in all major receiving categories. (Then-junior and current Charger Tyron Johnson was that team’s #2 WR.) He accounted for 29.4% of the receptions, 37.0% of the receiving yards and 36.4% of the receiving TDs.

Here’s how those sophomore-year market shares compare to the top WRs in this draft class:

Wallace finished 13th in the country in catches, 2nd in receiving yards and 8th in receiving TDs. His 17.3 yards per catch ranked 8th among guys with 50+ grabs. He was named First-Team All-Big 12, a Second Team All American and a Biletnikoff Award finalist. Wallace topped 100 yards in 7 of 13 games that year, including a pair of 200-yard outings. He closed on a scoring barrage, hitting pay dirt 8 times over his final 6 games. And he was at his best in the biggest games, averaging 5.6 catches, 168 yards and 2 TDs across 3 games vs. top 10 opponents.

But his season ended when he went down with a torn right ACL in practice on October 30.

Wallace missed camp the following spring as he worked his way back. But he returned to practice in early August and was ready for the 2020 season opener.

Wallace ended up playing in 10 of Oklahoma State’s 11 games last year, missing the Baylor game in December with a sprained right knee. His per-game numbers and market shares were down a bit but were still impressive. Wallace averaged 5.9 catches, 92 yards and .6 TDs per game and soaked up 31.6% of the Cowboys’ receptions, 40.3% of the receiving yards and 40.0% of the receiving scores.

Wallace isn’t a very exciting watch. He’s good at most things -- but not great at any.

He’s a capable route runner, especially on intermediate stuff like comebacks and outs. But he doesn’t have the agility to create big separation.

Although he’s not a burner, Wallace has enough juice to make plays downfield. He does a good job stacking defenders and has an extra gear to get late separation.

Wallace runs angry after the catch, often looking to initiate contact with defenders. But he doesn’t offer much make-you-miss ability.

He’s at his best in contested situations, with a big catch radius and strong hands. Per Pro Football Focus, Wallace led college football with 43 contested catches over the past 3 seasons.

His hands are inconsistent, though. He’ll make a tough grab one play and then drop an easy one the next.

Wallace’s hands did seem to improve throughout his career. Pro Football Focus charted him with a respectable 6.4% drop rate in 2020.

Wallace puts a big check mark in the “production” box. He was 1 of the most productive WRs in Texas high school football history, turned in a huge sophomore breakout and remained dominant the past 2 seasons.

But there are concerns elsewhere. Wallace isn’t particularly big at 5’11, 194 pounds. He’s not particularly athletic, earning a below-average Relative Athletic Score at his Pro Day. And he’s not an outstanding route runner. So I wonder if the downfield and contested-catch stuff he did in college will translate to the next level.

Then there’s that ACL. We know a player is more likely to tear an ACL after doing it the first time. And then there's this: Wallace’s twin brother, Tracin, tore his ACL 3 times in a 3-year span before retiring from football. I talked to a physical therapist who said that the situation makes Wallace genetically more likely to suffer another ACL injury in the future.

Wallace certainly needs to be respected because of the production profile, which is the greatest indicator of NFL success. But there are enough concerns to keep him from challenging the top of this WR class.