How crappy is tonight's showdown slate?

The biggest storyline heading in is how much Baker Mayfield will play.

The guy will be in his 3rd day with the Rams, after being claimed on waivers. But Mayfield reportedly has a shot to start if QB John Wolford's neck doesn't feel ready. He should fit in great with a Rams offense that has been wildly disappointing all season.

Mayfield, of course, has been so bad this year that the Panthers -- after trading a draft pick for him -- decided to cut the former #1 NFL Draft pick loose and proceed with P.J. Walker backing Sam Darnold at the most important position.

If pressed into duty, Mayfield would pilot an offense with only Van Jefferson and Ben Skowronek running routes on more than 54% of pass plays. (At least, that's how it played out in Week 13.)

The Rams also sport a flip-floppy backfield. Cam Akers dominated playing time -- and scored twice -- last week. But the usage ran almost exactly opposite the week before, in favor of Kyren Williams.

All of that might not matter a whole lot, because the heavy-hitters all reside in the Raiders offense tonight. Josh Jacobs leads our Week 14 RB rankings after his 3rd straight game over 100 yards. Davante Adams trails just 1 guy in the Week 14 WR rankings. Even Derek Carr sits comfortably in starter range in our Week 14 QB rankings, on the heels of 5 straight games with 2+ TD passes.

So the question as we build our DFS showdown lineups for Thursday night isn't so much who to play as it is: who to play around that Raiders trio.

Let's check the DFS value picks charts below for answers ... 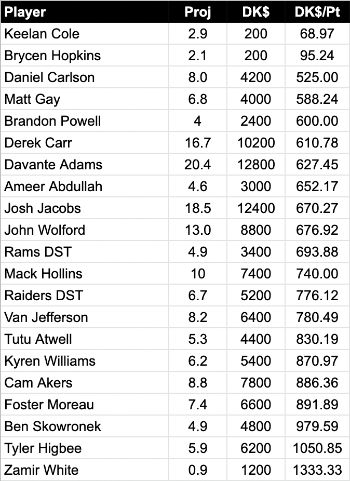 If you start with Adams (as Captain), Jacobs and Carr, then you'll have $8200 left for the remaining 3 spots -- $2,733 per player. Keenan Cole at the minimum is interesting. He didn't see a single target last week, but he has run a route on at least 72% of Carr dropbacks in 4 straight games. That at least gives him the possibility of getting involved more. Brycen Hopkins, by comparison, played just 10 snaps last week and has topped 14 snaps in a game only once all season. (Though that did come in Week 12.)

Brandon Powell isn't nearly as cheap as Hopkins but is interesting as your token Ram. He garnered a season-high 7 touches last week -- 4-39 receiving, 3-45 rushing. Powell also returns punts. So he has 3 ways to potentially break a difference-making play. 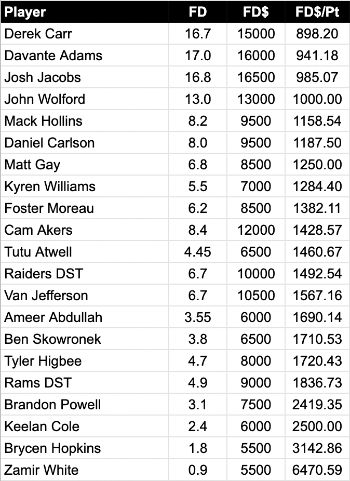 One more "how crappy is this slate": The only 5-digit salaries on FanDuel belong to the Raiders' power trio, Rams QB John Wolford, pretend lead-RB Cam Akers, Van Jefferson and Vegas' defense. That's a defense that ranks 3rd-worst in season fantasy points by ESPN scoring. Unfortunately, it's literally impossible to play Adams, Jacobs, Carr and the D in the same lineup because of FanDuel's unimaginative pricing. You'd only have $2,500 in cap for the remaining slot, with no players at less than $5,000.