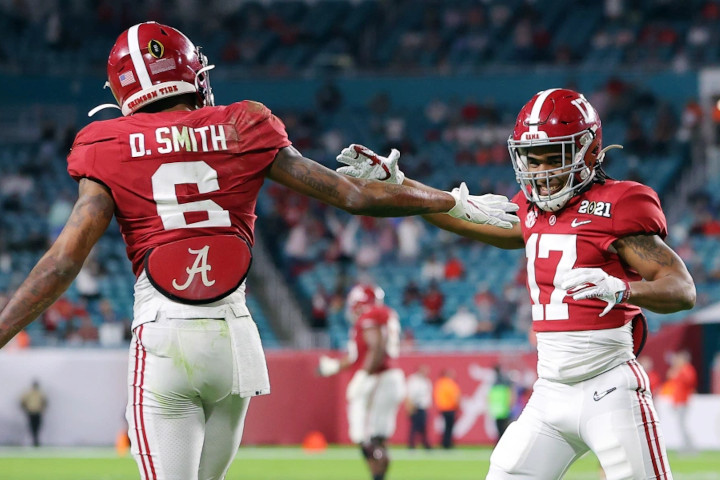 We spent the past 2 months digging deep into this year’s rookie class -- and writing up detailed scouting reports on 45 of the top prospects.

These, of course, will change after the NFL Draft. But it’s helpful to get a lay of the land before landing spots and draft capital enter the equation.

We’ll get together post-draft to hash out a unified set of rankings for your dynasty rookie drafts.

But for now, check out the top 25 overall rankings, followed by some commentary on guys with the biggest discrepancies in our individual rankings. Below that you’ll find individual positional rankings.

Smola (5th): He’s not Tyreek Hill -- but he’s the closest thing we’ve seen to the Chiefs superstar. Waddle has angle-busting, field-tilting speed and is also much better in contested situations than you’d expect from a 5’9, 180-pounder. He doesn’t hit all the production benchmarks we like to see, but context is important. He tallied 848 yards and 7 scores as a true freshman in 2018 alongside Jerry Jeudy, Henry Ruggs, DeVonta Smith and Irv Smith. And he actually out-gained DeVonta Smith in their 4 healthy games together last year, topping 100 yards in each of them. A likely top-12 pick later this week, Waddle should be a big-play machine from the jump.

Schauf (11th): The NFL Draft could still do some sorting on the WRs in this range for me. But I like that Rashod Bateman, Terrace Marshall and Elijah Moore all beat Waddle on the market-shares front. Marshall and Moore did their producing in the same conference as Waddle. Bateman and Marshall have size that’s easier to project to the NFL. So we’ll see whether I stick with Waddle behind those guys, but I’m comfier with that trio at the moment.

English (4th): Williams is an elite tackle breaker with a solid pass catching resume (10.8 yards per catch on 50 career catches). He exits college without any injury concerns and should have plenty of tread on his tires as a 21-year-old with 365 total touches over the past 2 seasons. With the upside to be a rare workhorse, I’m taking him ahead of guys like Waddle, Smith and Pitts pre-draft.

Schauf (12th): Draft capital might push Williams closer to Travis Etienne and Najee Harris than I have him on my board now, but I like the 2 of them much better heading into the NFL Draft. Unless I’m hard up for a RB, I’d also prioritize a top WR over Williams in my rookie drafts. That’s most of the difference for me on Williams here. The final piece is the 2 QBs I put in the middle of Round 1. If you’d rather go RB and wait to see the QB landscape in Round 2, that’s fine. And if you’re set with a long-term answer at QB in a 1-QB league, then certainly pass over my Round 1 options at that position. But I think Justin Fields and Trevor Lawrence will quickly turn into bigger fantasy difference makers than a RB who split the UNC backfield with Michael Carter.

Schauf (5th): It might seem like there are now enough dual-threat QBs to spread around your entire fantasy league -- and we’re probably getting closer to that reality. But there have still been just 10 player seasons ever where a QB reached 4,000 yards passing and 400 yards rushing. Three of those came last season: Deshaun Watson, Josh Allen and Russell Wilson. Watson is the only active QB who has reached those levels more than once. Steve Young is the only other QB who has ever posted multiple such seasons. You can still gain an advantage by rostering such a QB. Both Fields and Trevor Lawrence could be that kind of player and producer in the NFL, and I believe each looks well prepared to offer such production early. I’ll take Fields 1st because he’s faster than Lawrence (98th-percentile 40 time) and looks like at least as good a passer. Fields’ 80.8% adjusted completion rate for 2020 trailed only Mac Jones among this QB class -- despite an average target depth (10.37) significantly deeper than those of Lawrence (9.00) and Jones (8.76). If you just don’t want a QB in Round 1 of a rookie draft in a 1-QB league, that’s fine. But I’d generally rather take the next Deshaun Watson (on-field version) than throw a dart at RB or WR.

English (16th): To be clear, I’m a fan of Fields. He has the production, size, tools and athleticism to forecast a favorable fantasy career. As Matt indicated, Fields runs a sub-4.50 forty. That alone should get you excited, especially when you mix in his potential to play all 17 games right away. I’m simply devaluing the QB position because of its historic depth. If we’re talking superflex, though, Fields shouldn’t make it past the top-5 picks of rookie drafts.

English (15th): I don’t have any major on-field knocks against Marshall. The LSU product is simply hurt by a crowded WR class, although for me, he sneaks in a tier with Elijah Moore, Rondale Moore and Kadarius Toney. The recent injury chatter does give me pause. Marshall fractured his left foot in September of 2019 and broke his left fibula in September of 2017.

English (14th): While he’s unpolished as a route runner, Toney’s tape clearly shows a guy with top-end burst, elusiveness and long-speed. At Florida’s Pro Day, he posted a 4.41 forty time (81st percentile), a 40-inch vertical (90th percentile) and an 11-foot, 4-inch broad (99th percentile). It sounds like Toney will be a Round 2 pick, with an outside shot at sneaking into the 1st. His NFL team should figure out a way to manufacture touches early on via screens, jet sweeps, etc.

Schauf (21st): Honestly, I’ll probably move Toney up some once we’ve confirmed NFL landing spots. For now, though, he just kind of gets lost in a crowd of options at the position. There’s obviously plenty of talent, which is why he’s often projected into the NFL Draft’s 1st round. But the mere 1 season he has spent at wideout so far makes Toney a total projection and far less safe a bet than many other guys around him. Mecole Hardman serves as an easy example of the kind of patience you’ll likely need with a versatile-yet-inexperienced wideout. And Hardman spent 1 more season focused on the position in college than Toney did. I’m not that patient, especially when I don’t think the payoff includes the possibility of becoming an NFL target hog.

Schauf (15th): Wallace dominated statistically over his final 3 college seasons. He broke out as a 19-year-old sophomore, including scoring the most total TDs on a team that had Justice Hill and Chuba Hubbard in the backfield. He would have been a prime early-entry candidate after a strong junior year but suffered a late ACL tear. Wallace rebounded from that for a 59-922-6 senior campaign that again found him dominating market shares. On tape, I saw a guy consistently making plays downfield -- which is the best place for your fantasy wideout to be making them. Better athletic testing would have been nice, but there’s no history of any athletic-testing metric signaling NFL success or failure at the position. Breakout age and market shares, on the other hand, have checked out on multiple occasions. The questions with his ACL (his past plus family history) are my only concern, so we’ll see what draft capital says about that.

Smola (21st): Wallace’s production profile lands him near the top of this year’s WR class, so perhaps I’m too low on him. I just wasn’t impressed by the tape, which showed a receiver who was reliant on making plays in contested situations. If Wallace was big and athletic, I’d be more willing to believe that those skills would translate to the pros. But he’s 5’11, 194 pounds with below average athleticism. There are also durability concerns after Wallace tore his ACL in 2019 and his twin brother tore his ACL 3 times in a 3-year span.

English (21st): The #2 WR prospect in his recruiting class, St. Brown went on to enjoy a solid-yet-unspectacular career at USC. What I like: St. Brown’s freshman breakout with a team-leading 60 catches for 750 yards. He’s a contested catch master with positional versatility and enough polish to potentially deliver year 1 fantasy stats. If he doesn’t come off the board on day 2, however, I’ll have to reevaluate his rank.

Smola (unranked): Blah. St. Brown just didn’t do it for me on tape. He’s good enough in contested situations, a fine route runner and decent after the catch. But I don’t see a trump card. And after an impressive freshman season at USC, he never really took a step forward in the market-share department. I see him as a #3 WR in the NFL -- and not a difference maker on fantasy rosters.

Smola (20th): In a WR class with a bunch of undersized guys who will be hard-pressed to be more than secondary options in their NFL passing games, Williams is 1 of a handful with alpha potential. He’s a 6’3, 211-pounder with sub-4.5 speed and a 37-inch vertical. The raw numbers at Auburn weren’t big -- but he eclipsed a 30% share of receiving yards and TDs as a sophomore and junior. And the tape, while inconsistent, shows flashes of dominance in contested situations and after the catch. Williams has the type of upside I’m looking for in the middle and late rounds of dynasty rookie drafts.

English (unranked): I’m with Jared on the size/speed combo. Even the production is solid, especially when you factor in Auburn’s bad QB play. (Per Pro Football Focus, only 58% of Williams' career targets were catchable.) He could have done more, though, given a nearly 11% drop rate. And while I saw some flashy catches on tape, I didn’t see a consistent separator. A 7.2-second 3-cone (12th percentile) and a 4.43 short shuttle (12th percentile) confirmed that notion.

The Fantasy Football Players Championship is rolling out a new, unique tournament for 2022. Get the details inside.