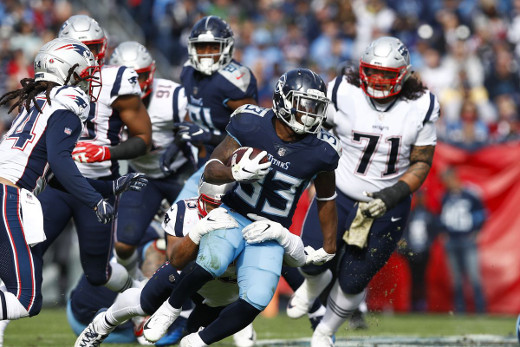 The Giants are signing RB Dion Lewis to a 1-year deal, according to ESPN's Josina Anderson. Lewis looks like the best current bet to follow Saquon Barkley on the RB depth chart, though we'll see what the rest of free agency and the NFL Draft bring. Even without any other significant additions, we wouldn't look to Lewis as more than a late handcuff behind the Giants' workhorse.

The Titans have released RB Dion Lewis, saving $4 million against the 2020 salary cap. The 29-year-old was seldom used behind Derrick Henry this past season and averaged just 3.9 yards per carry and 6.6 yards per catch. He's an unexciting change-of-pace option on the open market.

The Titans on Tuesday reached a 4-year deal with RB Dion Lewis, according to ESPN's Adam Schefter. We'll see about the specific salary, but we'd certainly bet that Tennessee signed Lewis to at least approximate the size of the role DeMarco Murray left behind. The move indicates the Titans don't want Derrick Henry to turn into the clear backfield leader. There's certainly room for both backs to deliver usable fantasy football value, but neither should climb higher than Round 4 -- if that high -- in early best-ball drafting.

Update: Lewis is getting a 4-year, $20 million deal, according to NFL Network's Mike Garafolo.

Patriots RB Dion Lewis injured his hamstring late in the Super Bowl victory over the Falcons, he told reporters after the game. Lewis actually said he "tweaked" the hammy early on, which at least partially explains why he finished with just 7 touches. The injury shouldn't impact Lewis' offseason. He'll be back with New England in 2017, the final year of his current contract, but his role is murky after an injury-riddled and inconsistent 2016.

Patriots RB Dion Lewis (knee) is active for today’s game against the 49ers. It’s unclear how big a role he’ll play in his 2016 debut. Lewis is just a PPR flier.