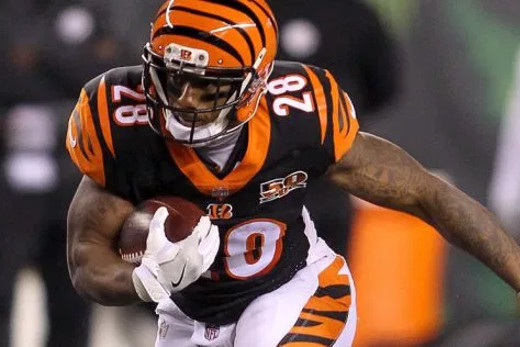 There are a few distinct features of the Pros vs. Joes League that influence my draft strategy:

And gamble I did. Here’s a pick-by-pick recap of my draft.

New FFPC players get $25 off their first FFPC league! Just click on this link, create an FFPC account and register for a league. $25 will be applied at checkout!

The 8 spot is tough this year. There’s no clear-cut best available player after the top 5 RBs and Travis Kelce (in the FFPC) are off the board. And while there are plenty of other guys I like, it feels like they all have a decent shot to make it back to the 2nd round.

Mixon was the guy I didn’t want to risk missing out on: an uber-talented 3-down workhorse who ranked 9th among RBs in PPR points per game last year. The 23-year-old is capable of even more in 2019.

There’s certainly a chance Gordon’s holdout extends into the regular season — but I still don’t think that’s very likely. And if Gordon shows up before Week 1, I got almost a full round of value on him here. He’s finished 5th, 6th and 5th in PPR points per game among RBs over the last 3 seasons.

I love the value at RB in the 3rd round this year: Devonta Freeman, Kerryon Johnson, Leonard Fournette and Jones.

The Packer is a prime breakout candidate. His 5.5 yards per carry is tops among all 45 RBs with 200+ carries over the last 2 seasons. If the Packers commit to him — and early signs are that they will — Jones is capable of posting RB1 numbers this year.

Both Vikings WRs got snapped up right ahead of me here. But Edelman isn’t a bad consolation prize. He finished 13th among WRs in fantasy points per game in this scoring system last year. His broken thumb shouldn’t be an issue by the time Week 1 rolls around.

I wasn’t expecting to leave this draft with Mahomes. But I also wasn’t expecting him to still be hanging around in the late 5th. In the other 3 Pros vs. Joes drafts that have finished, Mahomes went at 4.10, 4.01 and 3.08.

The MVP Board was screaming at me to take the Chief here — and nothing excited me at the other positions.

I had planned on taking 3 QBs in this draft. But an added benefit of grabbing an elite QB is that you can roll with 2 and use that extra spot to build more depth at another position.

I strongly considered Tyler Boyd here but didn’t love the idea of taking 2 Bengals with my first 6 picks.

Jeffery ranked 23rd among WRs in PPR points in his first season with the Eagles in 2017 and finished 23rd in PPR points per game last year. I got him here as the 26th WR off the board.

Hooper ranked 6th among TEs with 196.5 points in the FFPC last year. To put that in perspective, only 22 WRs tallied more points.

Hooper’s volume should stay steady from his 88 targets from a year ago. And he’s a candidate for a TD spike after scoring on just 4 of his 71 catches in 2018.

Here’s a pick I’d take back if I had a chance. I wanted to lock up a pair of top-14 TEs and expected there to be a run between my 8th and 9th picks. Just 3 TEs came off the board in that span, though, and I could have nabbed Kyle Rudolph in the 9th.

At least Njoku is more exciting than Rudolph. He’s a former 1st-rounder with elite athleticism in what should be a high-powered Browns offense this season. And his 56 catches and 639 yards last year were both top 10 marks in NFL history by a TE age-22 or younger.

The 2nd-year speedster is the favorite to open the year as Green Bay’s #2 WR. The Packers have produced a pair of top 36 PPR WRs in 6 of the last 8 seasons.

I’ve drafted a lot of Guice already this year. I don’t want to draft so much Guice. But if he’s going to be available in Round 10 with 41 RBs already off the board, I can’t help myself. He remains a big talent who should emerge as Washington’s lead back if healthy.

He’s made a big move up the WR rankings over the past few weeks. Sanders was surprisingly ready for the start of camp after last December’s torn Achilles and has drawn strong reviews from coaches and media.

Remember that Sanders was sitting 15th among WRs in PPR points before going down last year.

There’s almost always a massive QB run somewhere in the early double-digit rounds in these FFPC best balls. In this case, 10 QBs flew off the board between the 11th and 12th rounds.

So it was time for me to secure a backup to Mahomes. Garoppolo is a bet on 49ers HC Kyle Shanahan’s offense more than anything else. Combine Garoppolo’s, Nick Mullens’ and C.J. Beathard’s numbers from last season and you get the QB15 in FFPC points.

Rookie Parris Campbell has been buzzing early in camp, but I still like Funchess to finish 2nd among Colts WRs in targets this season. He’s still just 25 and is making $10 million in 2019 — a top 25 figure at his position.

Expect to see Williams on every one of my teams if his price stays in this range. The 27-year-old ranks 6th in yards per catch and 5th in yards per target among 68 WRs with 100+ grabs over the past 3 seasons. Now he has a clear path to 100+ targets as the #2 WR in Oakland.

No way he should be 54th WR off the board as he was here.

He serves as a quasi-handcuff to Emmanuel Sanders but could also have standalone fantasy value. Hamilton racked up 25 catches over the final 4 games of last season, with Sanders sidelined.

Perennially undervalued. Sanu has finished 30th and 31st among WRs in PPR points the past 2 seasons. Even if Calvin Ridley steals a few more of his targets this year, Sanu should easily return value on this WR69 price tag.

The 36th overall pick of this spring’s draft has every chance to capture a top-2 WR job right out of the gate.

We’ve reached the K and DST time of the draft. I’m a big believer in grabbing 3 of each in these 28-round best ball drafts, with the rationale being a 3rd K and 3rd DST are more likely to start in any given week than any positional player still available.

Watson will serve a 4-game suspension to open the season but could emerge as New England’s top pass-catching TE after that.

He ranked 15th among TEs in fantasy points across 12 games without Tyler Eifert last year. Do you really expect Eifert to stay healthy all season?

He has a decent shot to lead his team in targets this year. I’ll take that in Round 27.

Riddick was still a Lion when I made this pick. I’d probably still grab him here if given the chance, though. He figures to latch on somewhere before Week 1. And it’s the 28th round for gosh sakes.