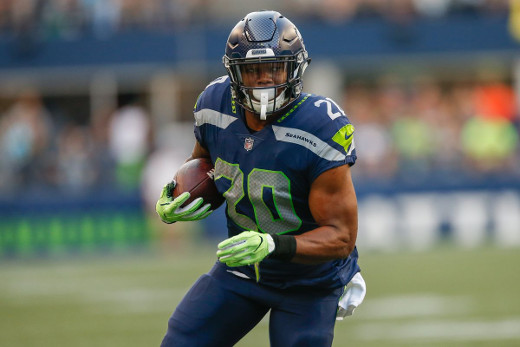 After 3-and-a-half mostly disappointing seasons to open his NFL career, Penny showed the skills that made him a 2018 1st-round pick over the final 5 games of last season. He led all RBs in PPR and non-PPR points during that stretch.

Penny and 2nd-round rookie Kenneth Walker will duke it out for snaps and touches this summer. But this is likely to be a committee backfield, with Chris Carson, Travis Homer and/or DeeJay Dallas also potentially involved. And it’ll be a bad offense without QB Russell Wilson.

That has Penny looking like just a bench stash on fantasy rosters – unless he handily beats out Walker.

Seahawks HC Pete Carroll confirmed Monday that RB Rashaad Penny needs season-ending surgery. He broke his fibula and damaged his tibia in the loss to the Saints. It's another tough break for a guy who's struggled with a plethora of injuries over the past 5 seasons. Penny will turn 27 in February and is scheduled to hit free agency in March. His absence leaves 2nd-round rookie Kenneth Walker as Seattle's clear lead back. We'll see how much passing-game work he's able to garner. But rushing production alone should make him at least a weekly RB2 in fantasy lineups.

Seahawks RB Rashaad Penny fractured his left tibia in Sunday's game against the Saints, according to NFL Network's Ian Rapoport. Penny will have more tests Monday to assess the "associated damage" and determine whether he'll need surgery. We'll see about the return timeline for Penny, who's on just a 1-year contract.

Seahawks RB Rashaad Penny suffered an ankle injury in the 3rd quarter of Sunday's game vs. the Saints and is doubtful to return. That leaves lead duties to rookie RB Ken Walker.

Seahawks RB Rashaad Penny (shoulder) isn't listed on the final Week 5 injury report. He got Wednesday off but put in full practices on Thursday and Friday. Penny looks ready for his usual role vs. the Saints this weekend. RB Kenneth Walker (shoulder) is listed as questionable, but HC Pete Carroll said Friday that the rookie should play.

Seahawks RB Rashaad Penny (shoulder) returned to a full practice on Thursday. He'll be ready to lead Seattle's backfield vs. the Saints this weekend.