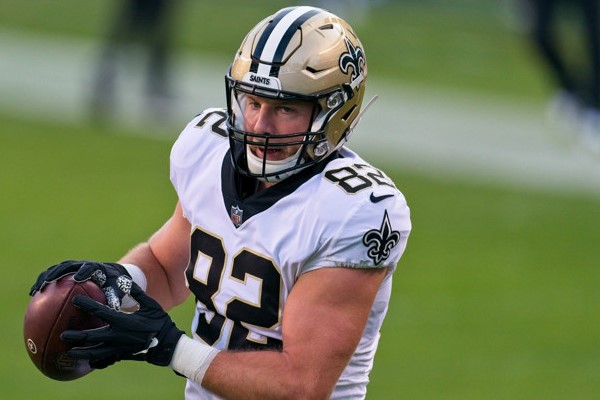 -The Saints traded up to select Trautman in Round 3 (105th overall).

-He brought versatility with 29% of his snaps coming out of the slot; 17% coming out wide.

-As a rookie, he caught 15 of only 16 targets for 171 yards and 1 score — no surprise given the depth chart and the jump in competition.

-Trautman received Pro Football Focus’ best run blocking grade among TEs. If the Saints came away with a similar assessment, Trautman could play a 3-down role this fall.

-TE Nick Vannett signed in the offseason. The 28-year-old journeyman will be a long-shot to steal substantial work from Trautman.

-Jameis Winston will battle Taysom Hill for the starting job in training camp. NFL Network’s Ian Rapoport believes Winston is the favorite entering the summer, and we project Winston to land the Week 1 job.

-Winston would be a wild card under center after not playing in 2020. But his aggressive tendencies figure to help Trautman see targets.

-The Saints lost 152 targets with the departures of Jared Cook, Josh Hill and Emmanuel Sanders. With the team still thin at WR, Trautman could push for 80+ targets if he develops quickly.

We know the Saints are high on Trautman after trading up for him in Round 3 of the 2020 draft. His quiet rookie year was explainable, and even then, he showed enough for the squad to essentially hand him a full-time role.

Boasting plus size and adequate athleticism, the main question is whether the small school product is ready for a year 2 jump. With an ADP near the tail end of most drafts, though, he’s an ideal TE2 stash.

Trautman a player to watch

According to Jeff Duncan of The Athletic, the Saints are “extremely high” on 2nd-year TE Adam Trautman. Duncan went so far as to name Trautman as his top “breakout candidate” for next season. As a rookie, the Dayton product saw just 16 targets behind Jared Cook. But he caught 15 of them for 171 yards (11.4 YPC) and 1 score. Duncan fully expects the cash-strapped Saints to move on from the high-priced Cook, who’s coming off a down season. Trautman, meanwhile, makes sense as a fringe TE2 or TE3 target in early FFPC drafts.

The Saints selected Dayton TE Adam Trautman in the 3rd round of the 2020 NFL Draft. Trautman improved his production all 4 years on campus, topping out with a 70-916-14 line in 2019. That obviously came against relatively weak competition. But Trautman posted big market shares, tied for 3rd in yards per route run among 18 of this year’s top WR prospects and led that group in Pro Football Focus’ receiving grades. He’s also a capable blocker and tested as a 67th percentile athlete at the Combine. We weren’t overly impressed by his tape, but Trautman really checks all the analytical boxes. He’ll sit behind Jared Cook this season but has some longer-term upside with HC Sean Payton in New Orleans.