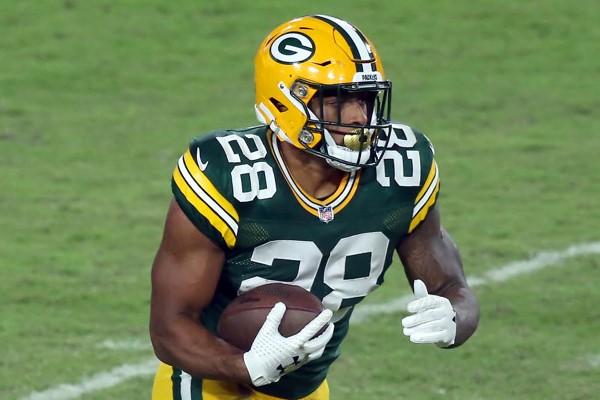 Week 14
The main takeaway from this game was that Dillon continued to see most of the carries for the Packers on Sunday Night Football against the Bears. He tripled Aaron Jones in carries 15-5. Dillon continues to earn those carries too, picking up tough yardage every time he touches the ball. He averaged almost 5 yards a carry on the night. Dillon and Jones are the perfect compliments to each other in a dynamic RB room. He finished the night with 15 carries for 71 yards. He did not see any action in the passing game. Dillon is currently seeing the majority of the touches given to the Packers backfield, receiving 15+ touches in each of the Packers last 4 games. Dillon is ranked as our RB23 this week against the Ravens. The Ravens have held opposing RBs to 0 total rushing TDs over their last 6 games. The next three games on the Packers schedule to wrap up the fantasy football playoffs include @BAL, CLE, and MIN.
Week 12
Even though Aaron Jones returned this week, Dillion led this backfield in opportunities once again. He gained 69 yards on his 20 carries. He added 21 yards and a TD, catching all 5 of his targets.

This was the 2nd time in 3 weeks that Dillon saw 20+ carries. The game he didn’t was the game against the Vikings where the Packers got down early and was forced to throw.

Going forward it's pretty clear that Dillon will be involved. The question becomes how much and where the opportunities come. He has shown the ability to make plays in the passing game. In the last 4 games, he is averaging over 4 targets per game, including seeing 11 in the last 2 weeks. With Jones back, Dillion’s passing work likely dials back assuming Green Bay isn't in negative game scripts early.

That said, even just 2 or 3 targets per game has the chance to add some real value to Dillon’s potential down the stretch. He should be in the high end flex or low end RB2 conversation most weeks.
Week 11
Dillon was the guy on Sunday, seeing a more prominent role with Aaron Jones sidelined. He gained 53 yards on his 11 carries. He also caught all 6 of his season-high targets for 44 yards. The Vikings getting out to a decent lead in this game certainly did not help Dillon's usage.

While Dillon dominated the touches in the backfield with 17, he certainly did not have the monster showing that many thought we could see. He was far from a let down, though, especially in PPR leagues.

Going forward, Dillon should remain the primary focus in this backfield with Aaron Jones out at least 1 more game. The Packers could easily be patient with the veteran RB, who will be important come playoff time. This all sets up Dillon as a solid RB2 with RB1 upside when he finds the end zone.
Week 10
Dillon had 21 rushes for 66 yards and 2 TDs in the Packers' Week 10 win against the Seahawks, adding 2 catches for 62 yards.
Dillon took the game over in the 4th quarter after starting RB Aaron Jones was lost for the game with an MCL sprain.
Dillon had 2 short TD runs in the 4th quarter and also helped seal the game with a 50+ yard reception right after an INT from a struggling Russell Wilson.
With Jones expected to miss 1-2 weeks with his knee sprain, Dillon should be in line for a massive workload and should be viewed as a RB1.
Week 9
Dillon was strong again on Sunday, seeing 12 total opportunities. He gained 46 yards on his 8 carries and 44 yards on 4 catches. This was the 5th time in 6 weeks that Dillon saw double-digit opportunities.

Going forward, Dillon can be a compelling option most weeks, especially when Aaron Rodgers returns, elevating the ceiling of the offense. While Aaron Jones is the lead back in this offense, it has become a 1A and 1B situation. The two RBs were separated by just two opportunities this week.

It will be interesting to see how the passing game shakes out between the two backs as Dillon has just 2 games with 4 targets while Jones has seen that volume in 6 of 9 games this season.

The variance with Dillon is much wider than Jones, but the week in and week out volume should make him a startable option most weeks.
Week 5
Continuing to operate as Aaron Jones’ change-of-pace option in the offense, Dillon saw a career-high 4 targets, and his 49 receiving yards, including his 1st TD of the season, represented more receiving yardage than he had in the prior 5 games. Known for his power running, he was actually more productive as a receiver, as he was unable to break through the Bengals D for 4 yards per carry. On his TD, he dove into the end zone to get inside the pylon.

After seeing between 5 and 8 touches in each of the Packers’ first 3 games, Dillon has seen 16 and 12 in the last 2, raising the potential of his weekly scoring floor. But aside from his 5+ yards per carry in Week 4, he’s been held to fewer than 4 yards per carry in the other 4 contests. Also, the receiving score he posted this week was his first TD of the year, but overall, the last 2 weeks have been strong RB2 performances, and he’s gaining a sizable role in the offense, so that may continue going forward.
Week 4
Dillon had a season-high 15 carries on Sunday, gaining 81 yards. He also caught his only target for 16 yards.

After seeing just 15 carries through 3 weeks, it was clear the Packers wanted to get Dillon some work against the Steelers. Going forward, there will be games like this for Dillon. But expect him to get a handful of touches most weeks.

Going forward, he is someone who has a ton of upside if something were to happen to Aaron Jones. But as it stands, he is more of a nuisance than a complementary piece.
Week 1
Dillon’s touches were limited throughout the game, only seeing 2 in the first half and 3 through the third quarter. It is hard to judge anyone from this game, so it’s best to leave him on your bench to see how he looks in a much better Week 2 matchup against Detroit. However, if he fails to produce against the Lions, it might be time to cut bait.

Dillon spent 3 college seasons as a rushing workhorse and then delivered impressive speed for his size. He went surprisingly early in the 2020 draft but then got minimal work as a rookie.

Jamaal Williams’ departure vaults Dillon into Year 2 relevance. It remains to be seen, though, how much his usage will look like Williams’. It’s tough to bet on Dillon being startable in fantasy while Aaron Jones is healthy. But the 2nd-year player should stay plenty involved and carries handcuff-type upside behind a starter who has missed 10 games through 4 seasons (and never reached 15 carries per game in a year).

Dillon is a decent option at his current RB39 ADP -- similar to Gus Edwards (2 spots lower) in outlook.

Packers RB A.J. Dillon fractured a rib in Saturday night's Divisional Round game vs. the 49ers, according to NFL Network's Ian Rapoport. Dillon has the offseason to heal up after Green Bay lost that one on a last-second FG. He and RB Aaron Jones will be back with the Packers in 2022, making it a tricky situation to handicap for fantasy purposes.

Packers RB A.J. Dillon has been placed on the COVID list. He's out for at least Thursday night's game against the 49ers. The bigger question is who Dillon was in close contact with recently. Those players may not be able to play on Thursday. We'll keep a close eye on the situation.

WTF: Packers take Dillon in Round 2

The Packers added Boston College RB A.J. Dillon in the 2nd round of the 2020 NFL Draft. Dillon served as his team’s workhorse in all 3 seasons on campus, registering rushing lines of 300-1,589-14, 227-1,108-10 and 318-1,685-14. His 4,382 career rushing yards and 38 career rushing scores are both school records. Dillon crushed the Combine, running a 4.53-second 40-yard dash at 6’0 and 247 pounds to earn a 97th percentile Speed Score. He also posted 96th and 97th percentile marks in the vertical and broad jumps, finishing with a 97th percentile SPARQ score. Dillon doesn’t look like an uber-athlete on tape, though. He needs a runway to hit top speed and has very little wiggle. He’s also a near-zero in the passing game, totaling just 21 receptions over the past 3 seasons. Dillon joins Aaron Jones and Jamaal Williams in Green Bay’s backfield. HC Matt LaFleur has been hesitant to make Jones a feature back — and this pick likely means that will continue. Longer term, it's worth noting that both Jones and Williams are set to become free agents next offseason.