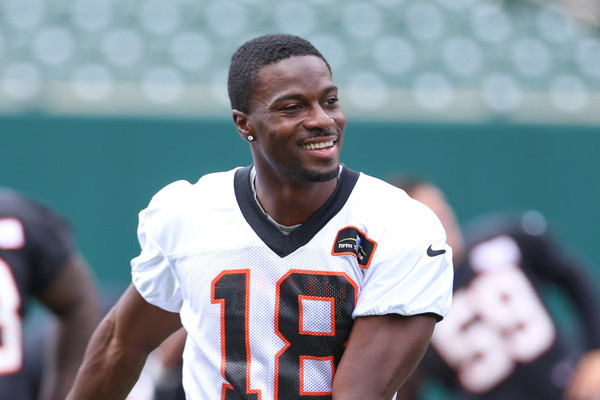 Green was fine last season, posting average efficiency marks and scoring as a WR4 in fantasy. He figures to open the season with a sizable role while WR DeAndre Hopkins serves his 6-game suspension.

When Hopkins returns, though, Green might slide to 4th on the depth chart behind Hopkins, Marquise Brown and Rondale Moore.

So while he might help you early on, there’s not much season-long upside with Green.

Cardinals WR A.J. Green (knee) is not listed on the final Week 5 injury report and will play vs. the Eagles on Sunday. He’s not a fantasy option, but his return should push WR Rondale Moore back into the slot (assuming Moore plays through his knee issue).

Cardinals WR A.J. Green (knee) got in a limited practice on Wednesday. We'll see if he can make it back for this weekend's game vs. the Eagles. Green isn't a fantasy option, but his return would likely push WR Rondale Moore into the slot where he belongs.

Green out for Week 4

As expected, Cardinals WR A.J. Green (knee) is out for Sunday’s game vs. the Panthers. Hopefully you weren’t counting on him. Green’s snaps figure to be picked up by some combination of WRs Andy Isabella and Andre Baccellia.

Green has bone bruise in knee

Cardinals WR A.J. Green has a bone bruise in his knee and "could miss at least this week," HC Kliff Kingsbury said Monday. Green has been wildly ineffective so far but has played 64% of Arizona's offensive snaps. Those will need to be picked up by either Andy Isabella or Andre Baccellia.

A.J. Green, WR ARI There is no dynasty data for this player.