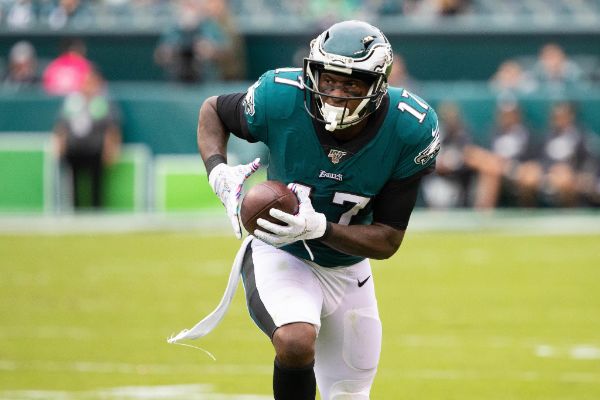 The Eagles will release WR Alshon Jeffery after the new league year begins in March, according to NFL Network's Ian Rapoport. This comes as no surprise. Jeffery just turned 31 and is coming off a 6-catch season, delayed by a late-2019 foot injury. We'll see whether Jeffery catches on anywhere else. We'll also see exactly how the Philly pass-catching corps shakes out through free agency and the NFL Draft. (The Eagles pick 6th overall.) TE Zach Ertz has been a rumored potential mover as well. We'd bet on Philadelphia making a significant WR addition via the draft or free agency. Travis Fulgham and Jalen Reagor stand as the top 2 incumbent wideouts in targets. (Greg Ward is an exclusive-rights free agent.)

Jackson out for Week 17

Eagles WR DeSean Jackson (ankle) is out for Sunday night’s game vs. Washington. He popped for a long TD in last week’s win over the Cowboys but is hurt again. Jalen Reagor, Greg Ward, Alshon Jeffery and Travis Fulgham will be Philly’s top 4 WRs in the finale.

Eagles WR Alshon Jeffery (calf) put in a full week of practice and will make his 2020 debut against the Giants on Sunday. HC Doug Pederson suggested on Friday that Jeffery will be limited in his 1st action since last December. He’s not a viable Week 10 fantasy play.

The Eagles expect WR Alshon Jeffery (calf) to be a full participant in practice after the bye. Jeffery, of course, has not played since suffering a Lisfranc injury last December but added the calf injury in the lead-up to Week 7. We'll see about his return to game action, and then how big a role he'll play. Jeffery won't be usable in fantasy lineups in most cases at least until we see a game from him. His role, however, could impact playing time for fantasy revelation Travis Fulgham.

Jeffery out for Week 7

Eagles WR Alshon Jeffery is out for Thursday night's game against the Giants. He's now listed on the injury report with a calf, in addition to the foot. Jeffery's absence ensures that Travis Fulgham will remain Philly's starting 'X' receiver this week.

Alshon Jeffery, WR UNS There is no dynasty data for this player.