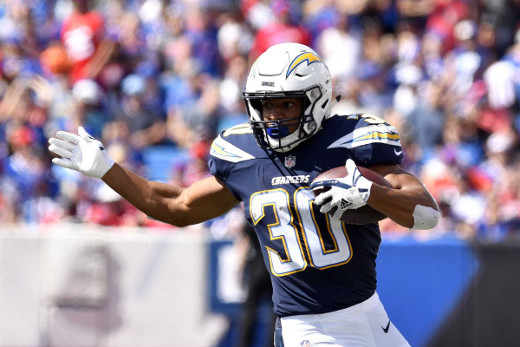 Ekeler is coming off a massive season, finishing RB2 across fantasy scoring systems. He returns in 2022 to the same offense with the same QB and with 4 of 5 of last year’s O-line starters back.

The only real question here is whether rookie RB Isaiah Spiller will cut into Ekeler’s volume at all, especially near the goal line. But Ekeler could lose some of that work and still score as a top-5 fantasy RB.

He’s a safe pick in the 1st round of fantasy drafts, with more value in full PPR setups.

Chargers RB Austin Ekeler scored twice on the ground in Sunday's win over the Texans, amid 13 carries for 60 yards. He added a 14-yard receiving TD in the 4th quarter, among 6 catches for 49 yards. It marked the 3rd time in 4 games that Ekeler got at least 18 touches. Joshua Kelley and Sony Michel combined to play 10 fewer snaps combined.

Ekeler gets scant ground use

Chargers RB Austin Ekeler logged just 4 carries for 5 yards in Sunday's lopsided loss to the Jaguars. The score might have been a factor in the 2nd half, but Ekeler carried just twice through the entire 1st half of a game that stood at 16-10 early in the 3rd quarter. Ekeler did lead the Chargers with 8 receptions (for 48 yards) to salvage some PPR value. But he was splitting opportunities with Sony Michel early in the game. Ekeler wound up running 26 routes to 13 combined for Michel and Joshua Kelley, but that pair played just 7 fewer snaps overall. Ekeler ranks just 25th in the league in carries through 3 games, with Ezekiel Elliot close enough to pass him Monday night. Ekeler ranked 16th in the league in rushing attempts last season; 20th in carries per game.

Ekeler bounces back in Week 2

After underwhelming usage and production in the opener, Chargers RB Austin Ekeler turned in a more promising Week 2. He carried 14 times for just 39 yards but added 9 catches on 10 targets for 55 yards. Ekeler's snap rate climbed from 49% in Week 1 to 63% in Week 2; his route rate from 37% to 60%. If he can stick around that level of usage, Ekeler will be an easy PPR RB1.

Ekeler has finished as a top 10 PPR RB in 2 of the last 3 seasons, missing 6 games with injury in the other. He turned 27 in May but should still have plenty of tread on his tires. And he's tied to 1 of the best young QBs in the game for at least the next 2 seasons.