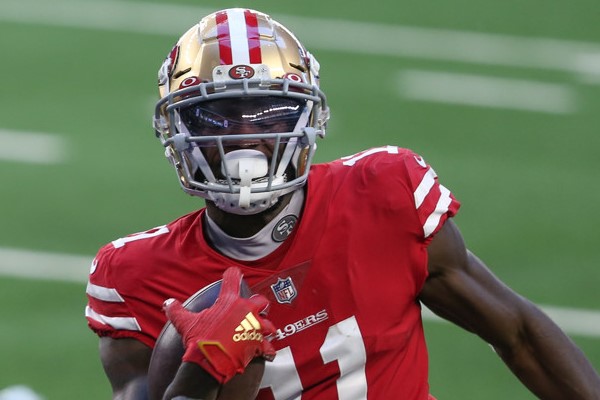 Week 14
Aiyuk just might be San Francisco’s lead WR right now. A Deebo Samuel groin injury has certainly factored in over the past 3 games, but Aiyuk has led Samuel in total routes every game since Week 8.

Against Cincinnati, Aiyuk held a 48-40 edge. Perhaps the groin – which kept Samuel out the game before – claimed some playing time. But it certainly couldn’t account for Aiyuk’s 11-1 lead in targets.

Over his past 4 appearances, Samuel has totaled just 12 targets, compared with 27 rushing attempts. The same 4 games produced 28 targets for Aiyuk. Before Sunday, Aiyuk’s lead was a smaller 17-11 in that category.

There’s certainly not enough here to say that Aiyuk has passed Samuel in the team target pecking order, especially with Samuel’s injury factored in. But it’s plenty fair to consider them at least equal as PPR candidates right now.

A Week 15 matchup with Atlanta looks good for everyone. Tack on matchups with Tennessee and Houston the following 2 weeks, and you have the best remaining WR schedule, according to our adjusted fantasy points allowed.
Week 13
With Deebo Samuel out, it seemed as if Aiyuk would be in for a large target share, but he saw just 6 of Jimmy Garoppolo’s passes. Of course, a 20% target share isn’t bad, but with the lack of 49ers weapons, he should’ve been busier. Two of the passes he saw were slightly off the mark, causing incompletions, and he actually made a great catch on another pass, but as he fell to the ground, what was ruled as a catch and fumble (that Aiyuk recovered) was challenged and overturned as an incomplete pass.

After a disastrous first 6 weeks of the season, Aiyuk has been a solid WR2 since. He came into this game having posted at least 85 yards in 3 of his last 4 while scoring twice. He’s been on the field for over 90% of the snaps and has been running routes on most of the 49ers’ plays. The only concern is that there’ll be games when the team doesn’t throw a lot of passes, and the team needs to involve George Kittle and Deebo Samuel, so the occasional downside week is inevitable. But the schedule couldn’t be easier in the fantasy playoffs, when he’ll face the Falcons, Titans, and Texans.
Week 12
In a game in which the 49ers mauled the Vikings on the ground, they didn’t need to throw the ball very often. And with Deebo Samuel and George Kittle seeing a combined 6 targets, Aiyuk was fortunate to lead the team with 6 targets. On 2 of his receptions, Aiyuk was able to get the ball in space, which allowed him to gain big yardage after the catch, giving him a solid yardage total. He had a chance to go over 100 yards, but on one of his targets, the defender made a great play to break up the pass.

Although his targets can fall off in any game, like the 4 targets he saw in Week 10, he’s establishing himself as a fairly reliable fantasy option. He’s been targeted between 6 and 8 times in 4 of his last 5 games, while posting at least 85 yards 3 times during that span. He’s also scored twice in his last 4. He should remain a strong fantasy option in the fantasy playoffs, with 3 great matchups against the Falcons, Titans, and Texans. In the short term, he could see a volume boost if Samuel (groin) misses time.
Week 11
Aiyuk has finally clawed himself out of the doghouse and the stat sheet is showing it as well. Aiyuk secured all 7 of his targets for 85 yards and a TD. This marked the 3rd game out of the last 4 that Aiyuk saw at least 7 targets. As his volume continues to rise, Aiyuk is starting to find the end zone as he caught his 2nd TD in his last 3 games. This is well overdue for fantasy managers who held onto Aiyuk as he only had 1 TD on the season prior to Week 9.
This week Aiyuk takes on the Vikings who have struggled to contain WRs this season. This includes allowing 20 fantasy points in .5 PPR to both Davante Adams and Marquez Valdes-Scantling in Week 11. This matchup along with Aiyuk’s increased usage should make him a solid WR2/3 this week.
Week 9
Aiyuk caught 6 of 8 targets for 89 yards and 1 TD in the 49ers' Week 9 loss to the Cardinals.
Aiyuk had by far his best game of the season as his previous season high was just 45 yards. Aiyuk had a few awesome contested catches, including a TD from 11 yards out in the 3rd quarter, outleaping a couple of defenders.
Aiyuk also had a leaping catch in the 1st quarter and quickly got up but coughed up the football as the 49ers were trying to cut an early deficit.
Aiyuk has had his best 2 games of the season in back to back weeks and is an interesting option as a WR3 or flex option down the stretch.
Week 8
After a very underwhelming season, San Francisco started getting Brandon Aiyuk the ball. He saw 7 targets, catching 4 for 45 yards. He had seen 8 total targets in the 3 games prior. He also hit season highs in snap rate (88%), route rate (97%) and target share (25%).

Going forward, there may be some reasons to become more optimistic about Aiyuk. If what we saw against the Bears becomes a trend, he could become the player many expected to see coming into the season. There is clearly an opportunity for someone opposite Deebo Samuel to step up.
Week 3
Don’t look now but it appears Aiyuk may have escaped Kyle Shanahan’s doghouse.

Aiyuk was on the field for 60 of 70 offensive snaps on Sunday Night Football, which was very encouraging compared with his usage in weeks 1 and 2. Aiyuk saw a 15% target share in this game with 6 total looks. He finished with 4 catches for 37 yards, including a 13-yard TD in the 3rd quarter.

This week could be the breakout game fantasy managers have been waiting for with Brandon Aiyuk. The Seattle defense has allowed the 7th-most passing yards over the first 3 weeks of the season. Aiyuk’s snap share and target count have climbed every week.

We have him ranked at WR38 this week and WR41 the rest of the way, with upside from there if his usage continues to improve.
Week 2
Week 2 offered us reason for modest optimism. Aiyuk managed only 2 targets, securing the 1 catchable opportunity for just 6 yards. (Thought that did convert a 3rd down, at least.) He also pulled a little closer to Deebo Samuel in playing time and away from Trent Sherfield.

We’ll still need more than that before considering Aiyuk for fantasy lineups, especially considering the lack of upside that comes from playing with Jimmy Garoppolo right now. But the good news is that this pass offense seems to need Aiyuk’s talent.

Aiyuk turned in a promising rookie season and is a candidate to take a step forward in 2021.

But we’re worried about his volume. He benefited from WR Deebo Samuel and TE George Kittle missing a bunch of games last year. Both guys actually out-targeted Aiyuk when they were healthy. The 49ers also figure to be a run-leaning offense, especially once rookie QB Trey Lance takes over.

Aiyuk looks like just a WR3 who will likely be overvalued in your fantasy drafts.

Aiyuk "tailed off dramatically" this summer

Addressing 49ers WR Brandon Aiyuk's usage in the opener, insider Matt Maiocco wrote that Aiyuk "tailed off dramatically" in training camp and is "still learning how to be a pro." If that's the case, it went completely unreported. "Kyle Shanahan, clearly, favors some of the other WRs right now," Maiocco added. Aiyuk ended up finishing 2nd among 49ers WRs with 15 pass routes in Week 1 -- but that was just 1 more than Trent Sherfield and 4 more than Mohamed Sanu. Easily a top 2 talent on the roster, Aiyuk should eventually return to a full-time role. But he can't be trusted in fantasy lineups until we see it happen.

49ers WR Brandon Aiyuk finished without a single target in Sunday's opener vs. the Lions. We're still waiting for final snap counts but believe Aiyuk was 3rd or 4th among 49ers WRs in snaps. HC Kyle Shanahan said after the win that Aiyuk's late-August hamstring injury played a part in the reduced role today. We'll keep an eye on this situation, but Aiyuk will be impossible to trust in Week 2 fantasy lineups.

49ers WR Brandon Aiyuk (hamstring) put in a full week of practice and isn't listed on the final injury report. He should have his way with the Lions CBs on Sunday. But overall pass volume from San Francisco is a concern.

49ers WR Brandon Aiyuk (hamstring) was a full participant in Wednesday's practice. It's confirmation that he's good to go for Sunday's plus matchup vs. the Lions.

Aiyuk back at practice Monday

49ers WR Brandon Aiyuk (hamstring) returned to practice on Monday. That seemingly puts him on track to play in this weekend's opener vs. the Lions. We'll get San Francisco's 1st official practice report on Wednesday.