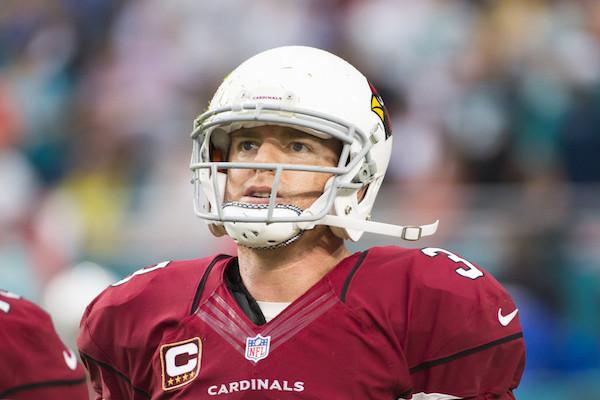 Cardinals QB Carson Palmer announced his retirement on Tuesday. The 1st pick of the 2003 NFL Draft played 15 seasons for the Bengals, Raiders and Cardinals. He finishes with a career 62.5% completion rate, 294 TDs and 187 INTs in 182 games. Palmer's 46,247 passing yards rank 12th on the all-time list. His retirement leaves Arizona looking for both a new QB and a new HC -- and probably increases the chances WR Larry Fitzgerald hangs up the cleats.

The Cardinals have placed QB Carson Palmer (arm) on IR. That officially knocks him out until at least Week 16. Palmer isn't worth holding onto in fantasy leagues. We're betting against him playing again this season. QB Drew Stanton will take over for Arizona, although we could also eventually see QB Blaine Gabbert. Either way, it won't be pretty.

Cardinals QB Carson Palmer has a broken left arm, HC Bruce Arians announced after Sunday's loss to the Rams. He needs surgery and is expected to miss 8 weeks. That'd put him back on the field for Week 16. Palmer should be dropped from fantasy rosters. His loss leaves Arizona with QB Drew Stanton, who was abysmal in relief vs. Los Angeles, completing just 5 of 14 passes for 62 yards, 0 TDs and 1 INT. He entered the game with a career 53.2% completion rate. Stanton is obviously a huge downgrade for this offense. The Cardinals figure to lean heavily on RB Adrian Peterson going forward.

Update: Palmer will not return.

Cardinals QB Carson Palmer entered the 2016 season with a tired arm, according to HC Bruce Arians. "Last year, he came in to September, he had already wore his arm out by overthrowing all summer," Arians said. "We found a nice regimen, [and by] November and December he was playing as good as he's ever played." Palmer has adjusted his routine this offseason, and Arians believes his arm is "stronger than ever." Palmer finished 16th among QBs in fantasy points last season but is just a year removed from a top-5 finish. There's plenty of upside at his QB23 ADP.