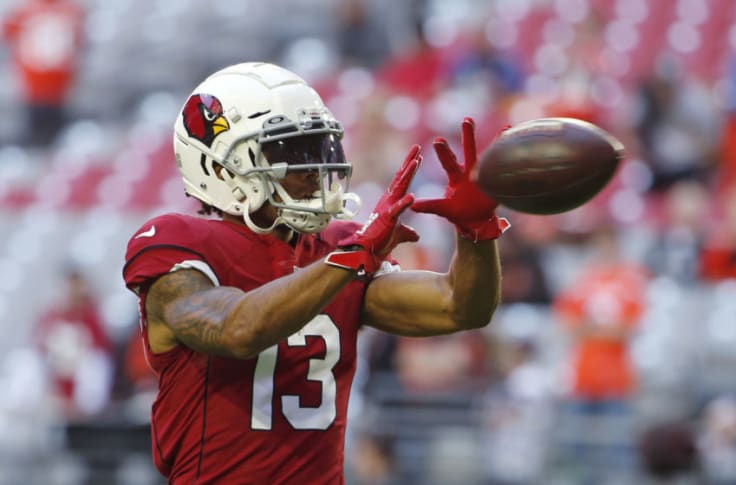 Kirk, only 26 in November, landed one of the most shocking free agent deals in recent memory.

He’s a starting-caliber WR, but to date, he hasn’t proven to be anywhere near elite. Yet the money he’s earning says the Jags see that type of potential. If he can run with the opportunity, 120+ targets are certainly possible in what should be a much-improved offense.

At a 10th round price tag, Kirk makes plenty of sense as a WR4 with upside.

Jags WR Christian Kirk snagged 7 balls for 52 yards and 1 score in the Divisional Round loss to Kansas City. He tied a season-high (and matched last week’s number) with 14 targets. He nearly cracked 100 yards in this one, but a well-thrown deep ball from Trevor Lawrence bounced off Kirk’s hands. The former Cardinal exited the regular season with 84-1,108-8 on 133 targets, enough to make him WR11 in PPR. He’ll enter year 2 in Jacksonville alongside newly acquired WR Calvin Ridley. We’ll see where their ADPs shake out in early drafting.

The Jaguars have no plans to rest starters against the Texans today, ESPN's Adam Schefter reports. "It's full steam ahead," a Jaguars official told ESPN. "Everybody's ready and everybody's playing." The AFC South title comes down to next weekend's game vs. the Titans, but the Jaguars do still have about a 6% chance at a Wild Card spot, so today's game isn't meaningless. We're projecting Jaguars players for full playing time.

Jaguars TE Evan Engram racked up 113 yards on 7 catches in Thursday night's win over the Jets. His team-leading 8 targets constituted 25.8% of QB Trevor Lawrence's total attempts. Engram also accounted for 35% of the team's receptions and 49.3% of the receiving yards. No other Jaguar reached 30 yards on the night or exceeded 3 receptions. WR Christian Kirk caught 3 of 6 targets for 22 yards. WR Zay Jones managed just 1 reception for 14 yards on 4 targets. Jacksonville closes out the fantasy schedule (for most leagues) with a Week 17 visit to Houston. Although that matchup has favored rushing all season, it's not a scary spot for any members of the Jacksonville pass offense. For Engram's sake, the Texans matchup has also been much friendlier to TE scoring (7th best) than to WRs (28th).

The forecast for tonight’s Jaguars-Jets game calls for light rain early, potentially getting heavier throughout the night. The bigger concern is the wind. We’re looking at sustained 15-20 mph winds with gusts of 30+ mph. It's ugly weather that figures to impact the passing and kicking games — while also possibly pushing both teams to run more than they would in better conditions. We’ve updated our Jaguars and Jets projections for the forecast.

Jaguars WR Zay Jones racked up a monster 6-109-3 receiving line on 8 targets in Sunday's OT win against the Cowboys. It marked the 5th straight game of at least 7 targets for Jones and his 4th time with at least 6 catches in that span. It was just his 2nd 100-yard game of the year, though, and just his 3rd time north of 80 yards. The TDs also more than doubled Jones' season total. TE Evan Engram led the team with 8 receptions and tied WR Christian Kirk for the target lead (10). WR Marvin Jones claimed the team's other TD reception among 2 catches for 17 yards (on 6 targets).

Kirk was mocked last offseason after signing a mega free-agent contract. But we’d say he pretty much delivered, topping 75 catches and 1,000 yards alongside breakout QB Trevor Lawrence. Kirk is only 26 years old.