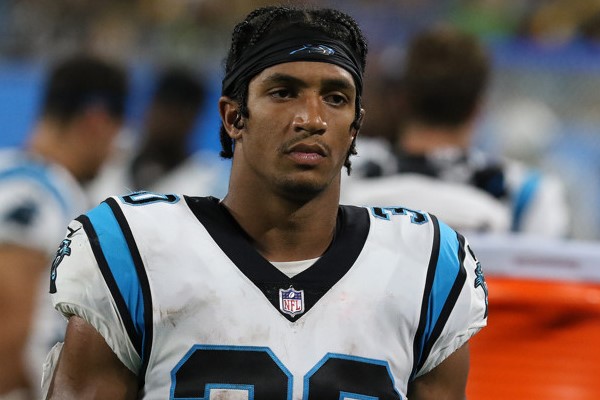 Week 7
Hubbard rushed for 28 yards on 12 carries and caught 4 balls for an additional 28. He was bottled up all game long as the Giants defense turned up the heat on the Panthers. Carolina all but abandoned the run in the 2nd half as they tried to get something going in the pass game.
Hubbard has been consistently getting double-digit carries in the absence of RB Christian McCaffrey, but there is just no bite in the offense when CMC isn’t on the field. Hubbard reached respectable totals in each of his previous 4 games, so we are willing to give him a pass, but the lack of scoring opportunities for a lousy offense is not a situation to trust a rookie RB. A road trip to the 3-3 Falcons on Halloween is up next for the now 3-4 Panthers.
Week 6
Hubbard rushed 16 times for 61 yards and 1 TD while catching 1 of 3 targets for 4 yards in Carolina's Week 6 overtime loss to Minnesota.
Hubbard got all of the Panthers backfield work with the team waiving Rodney Smith mid-week. Hubbard predictably handled 17 of Carolina's 18 backfield touches, including all 3 of the team's RB targets.
Hubbard should continue to be the workhorse for the Panthers as Christian McCaffrey was placed on IR with his hamstring injury.
Hubbard should be used as a solid RB2 in Week 7 against the Giants.
Week 5
Week 5 gave us the kind of usage from Hubbard that we hoped to see in Week 4. He handled 89% of RB carries (24 of 27) and 75% of RB targets (6 of 8). The receiving, in particular, stood in stark contrast to the previous game. Rodney Smith drew 5 targets to Hubbard’s 2 in the loss at Dallas.

Hubbard delivered against Philly, gaining 101 yards on the ground and catching 5 of 6 targets for 33 more yards. And he looked good doing it.

Of course, Christian McCaffrey now looks poised to return for Week 6. But we can at least look to Hubbard as the clear backup should McCaffrey go down again. If you picked up Hubbard and don’t own McCaffrey, then try shopping the rookie to the McCaffrey owner in your league.
Week 4
Carolina missed do-it-all RB Christian McCaffrey, sidelined by a strained hamstring. Rookie Hubbard was a pale shadow of what McCaffrey has been. Not a bad game statistically – more than 4 yards per carry (13 for 57) and 2 catches in 2 targets for 14 yards – but not much help in a fantasy lineup.
It’s likely that Hubbard would start at least 1 more week while McCaffrey heals. The backup option could be veteran RB Royce Freeman, who carried just 3 times for 12 yards at Dallas. RB Rodney Smith could be a 3rd-down option after catching all 5 targets for 48 yards.
Week 3
Based on usage in Thursday night’s win over the Texans, Hubbard looks like Carolina’s lead back until Christian McCaffrey returns from his hamstring injury.

Over the final 42 minutes of the game, Hubbard out-snapped Royce Freeman 38 to 11, including 9 to 0 on 3rd and 4th downs. The rookie also played 100% of the 2-minute snaps and 66% of the short-down-and-distance snaps, per Pro Football Focus. Hubbard tallied 10 carries and 5 targets sans McCaffrey vs. Freeman’s 5 carries and 1 target.

And Hubbard looked good. Not McCaffrey-level good, of course. But good. He tallied 52 yards on his 11 carries and caught 3 of 5 targets for 27 yards. Hubbard ranked 19th among 49 qualifiers in PFF’s Week 3 rushing grades and 23rd out of 32 in receiving grades.

It’s possible that Freeman plays more in these next few games without McCaffrey, but our money is on Hubbard operating as the clear lead back. Consider him a RB2 with upside for a plus Week 4 matchup vs. the Cowboys. We’ll reevaluate his standing after that one.

Hubbard eased in at OTAs

Panthers rookie RB Chuba Hubbard wore a red (non-contact) jersey during May OTAs. The OSU standout had surgeries on his knee and groin before the draft. File this info away as Hubbard battles for the #2 job behind Christian McCaffrey.

Oklahoma State RB Chuba Hubbard has landed with Panthers in the 4th round of the NFL Draft. Hubbard made himself a household name with 2,094 rushing yards and 21 TDs in 2019. His production slipped quite a bit to his final season, however, including a drop from 6.4 yards per rush to just 4.7. Hubbard brings plenty of speed, but he might not present enough all-around ability to turn into a lead back in the NFL. If he settles in as merely a committee piece, then the fantasy upside will be limited. Carolina's not a bad landing spot. Christian McCaffrey obviously stands to dominate backfield work for as long as he's healthy and with the team. But Hubbard could be the handcuff by the end of summer. He'll compete with Reggie Bonnafon and Rodney Smith for that honor.