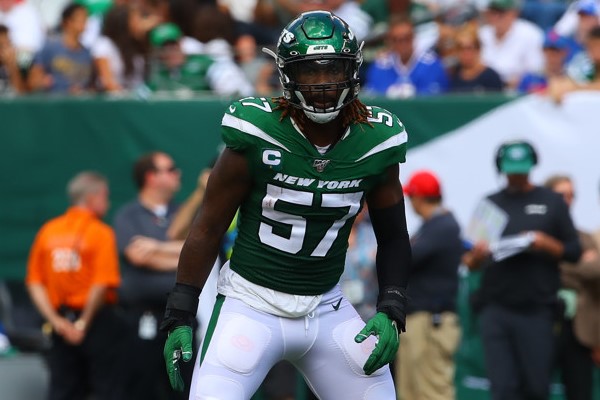 It's impossible to deny that there's risk here. Mosley has barely played since 2018. After losing nearly all of 2019 to a groin injury, he opted out of the 2020 season.

But it's also easy to see the upside. Mosley was a volatile fantasy scorer for the Ravens. He went from leading all LB scorers in 2017 to falling outside the top 30 in points per game in 2018.

At his best, Mosley contributes across categories. He averaged 7 passes defensed across 5 seasons in Baltimore. He opened his career contributing as a pass-rusher, though that tapered off. The tackles have fluctuated, though he topped 130 twice.

Now 29, Mosley has impressed in this camp. According to Connor Hughes of The Athletic: "He’s taken every starting rep and looks very much like the player who dominated for many years in Baltimore. Actually, he looks a little quicker. That’s because Mosley spent this offseason losing weight in an attempt to improve his coverage and better fit in Robert Saleh’s scheme."

As long as Mosley fares well in coverage, 3-down duty should be well within reach. Jarrad Davis has reportedly worn the green dot in workouts and called defensive signals. So we'll have to keep an eye on roles and playing time here. But Mosley carries top-10 upside -- likely at a price significantly lower than that.

Jets LB C.J. Mosley (back) and DE John Franklin-Myers (hip) are active for today's game against the Saints.

Jets LB C.J. Mosley (back) is questionable for Sunday's game against the Saints. He finished the week with a full Friday workout, though, and appears on track to play. DE John Franklin-Myers (hip) is also questionable, and also put in a full Friday practice.

Jets LB C.J. Mosley (shoulder) is active for today's game against the Texans. Use him as planned in IDP lineups. EDGE John Franklin-Myers (hip) is also active.

Jets LB C.J. Mosley left Sunday's game against the Dolphins for a concussion evaluation early in the 4th quarter and did not return. We have yet to see confirmation that he has entered the concussion protocol but will keep an eye out. LB Quincy Williams reclaimed his starting job from Jarrad Davis in the game and looks like a solid bet for playing time in the Week 12 visit to Houston.

Jets LB C.J. Mosley (hamstring) is active for today's game against the Bengals. Use him as you planned to in your IDP lineups. S Ashtyn Davis is also active after entering the day questionable.