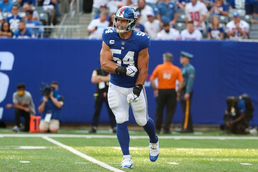 Jets DE John Franklin-Myers is questionable for Sunday’s game against the Broncos with a calf injury. He progressed from no practice Wednesday to a limited Thursday and then full participation Friday. We’ll check his status Sunday afternoon.

The Jets on Sunday sent a late-round draft pick to the Texans for DE Shaq Lawson. It’s a sensible move for a team that has lost DE Carl Lawson and DE Vinny Curry for the season. Shaq Lawson, though, has already washed out with 3 NFL teams: the Bills, who drafted him; the Dolphins, who signed him for big free-agent money; and the Texans, who traded (minimal value) for him. Odds are against Lawson being an edge-rushing savior for either the Jets or IDP rosters.

Jets DE Vinny Curry will miss the 2021 season because of a rare blood disorder, USA Today's Andy Vasquez reports. Curry revealed this week that he had his spleen removed in July after doctors diagnosed the disorder. While recovering, he developed blood clots that required blood thinners and 3-6 months of avoiding contact. It's fair to wonder whether this effectively ends the 33-year-old's career. The Jets, meanwhile, have lost both of the players who entered camp as their likely edge starters. Carl Lawson, of course, previously landed on IR with a torn Achilles' tendon. We'd bet on the team making a move or 2 to address the position now.

Jets HC Robert Saleh told reporters Monday that LB Jarrad Davis will likely be out until sometime around the team's Week 6 bye with his ankle injury. Davis hurt the ankle in Saturday's preseason game, leaving the sideline on a cart. According to Connor Hughes of The Athletic, Saleh says rookie Jamien Sherwood will step into Davis' starting role. Davis had appeared to be on track for full or near-full playing time. If Sherwood can approximate that playing time, he could be an early-season steal in IDP leagues.

Jets DE Carl Lawson confirmed Thursday afternoon that he tore his left Achilles' tendon. That obviously means he'll miss this season, his 1st with the Jets after arriving in free agency. We'll see about Lawson next offseason, heading into his age-27 campaign. Expect Vinny Curry and John Franklin-Myers to run as the top 2 edge players for the Jets now.

Jets DE Carl Lawson left the practice field on a cart Thursday after suffering a left leg injury, according to Connor Hughes of The Athletic. Hughes reports that "the entire field was silent when Lawson went down." That doesn't sound good for the 26-year-old big-money free-agent addition. We'll watch for a diagnosis. For now, don't draft Lawson in your IDP league.

Update: NFL Network is reporting that Lawson is getting an MRI on his left Achilles' tendon and that he felt a "pop" when he went down. We're removing him from the rankings for now, as we await a firm diagnosis.

The Jets have activated DT Quinnen Williams off the PUP. Williams opened training camp still working back from his offseason foot fracture. There's still time for him to round into shape before the Sept. 12 opener. We'll keep an eye out for any recurring or compensatory issues with Williams from here.

ESPN's Rich Cimini reports that LB Jarrad Davis has been calling the defensive plays in the huddle at practice lately. "Obviously, it could change," Cimini notes. But it this holds, then it would signal a near full-time role for Davis. We wouldn't bet on him playing more than C.J. Mosley -- who beats Davis significantly in both talent and salary -- but that looks like the Jets' lead duo at the position. And defenses across the league lean more on alignments with 2 or even 1 off-ball LB. Davis carries late-sleeper potential for your IDP draft.

Maye, Williams out to open camp

The Jets announced Friday that S Marcus Maye has opened training camp on the non-football injury list. DT Quinnen Williams landed on the active/PUP list. Williams' designation isn't surprising after his foot fracture in early May. It's not clear what Maye's issue is. We'll see how soon each starter gets activated.

The Jets have agreed to a 3-year, $45 million deal with EDGE Carl Lawson, according to NFL Network's Ian Rapoport. The contract includes $30 million guaranteed. Lawson hasn't gotten back to the 8.5 sacks he posted as a 2017 rookie and managed just 5.5 last year. But he has delivered plenty of pass-rushing production behind that low sack total. His 64 total pressures in 2020 ranked 6th among all defensive players, according to Pro Football Focus. Lawson should improve a Jets pass rush that posted the 8th-worst pressure rate last season, according to Pro Football Reference. We'll see whether Lawson keeps DE eligibility in the defense of new Jets HC Robert Saleh.

The Jets have agreed to a 1-year, $7 million deal with LB Jarrad Davis, according to NFL Network's Ian Rapoport. That money makes him look like a favorite for a starting spot in the defense of new HC Robert Saleh. The Jets likely have plenty more potential changes coming this offseason, so we'll wait to project too much. C.J. Mosley should be back after opting out last season (and losing basically all of 2019 to a groin injury). Blake Cashman is the only other ILB currently under contract.

The Jets have used the franchise tag on S Marcus Maye. That comes a year after they traded away S Jamal Adams for a package that included 2 first-round picks. Maye has played more than 1,000 snaps in 3 of his 4 seasons with the team and improved his Pro Football Focus coverage grade each year. He finished 2020 ranked 6th among safeties in overall PFF grade. Maye's fantasy production proved merely pedestrian after a huge opener at Buffalo, but there will be upside to him if you can get him in DB3 range in 2021.

Robert Saleh has signed a 5-year deal to become the Jets' HC, ESPN's Adam Schefter reports. Saleh has spent the last 4 seasons as San Francisco's defensive coordinator, leading the Niners to top 5 finishes in yards allowed in each of the past 2. Saleh is reportedly expected to bring former 49ers passing-game coordinator Mike LaFleur with him to New York to serve as OC. Mike is Packers HC Matt LaFleur's brother and has worked under Kyle Shanahan since 2014. LaFleur's only experience as an offensive coordinator came at Saint Joseph's in 2011 and 2012 and Davidson in 2013.

The Jets have fired HC Adam Gase, according to NFL Network's Ian Rapoport. This has been a long time coming. Gase's Jets won just 9 games over the past 2 seasons, finishing dead last in total yards both years. Other than when he's had QB Peyton Manning, his offenses have disappointed. We'll see who the Jets tab to replace Gase, but it'll undoubtedly be an upgrade for the offense.

Austin out vs. Patriots

Jets CB Blessuan Austin (illness) is inactive for today's game against the Patriots.

The Jets on Tuesday placed LB Harvey Langi on IR with a neck injury, ending his season. That removes the guy who had been starting next to Neville Hewitt inside. Bryce Hager looks like the next guy up, but we can't recommend trusting him in Week 16 IDP lineups vs. Cleveland. The continued onslaught of injuries to the Jets defense likely boosts the tackle upside of S Marcus Maye.

The Jets are placing DL Quinnen Williams on IR with a neck injury, according to ESPN's Adam Schefter. That ends a breakthrough season for Williams, both in real and IDP terms. Trevon Coley -- who the Jets claimed off waivers from the Cardinals last week -- looks like the next man up. He could be a sleeper for some tackle numbers against the Browns -- and would get an even better matchup with the Patriots in Week 17. But it's a little late in the fantasy season to make such a bet with your IDP lineup.

Jets DT Quinnen Williams sustained a concussion in Sunday's win over the Rams. He'll need to pass through the protocol before returning to play. We'll see whether he has a shot to face the Browns on Sunday, but you'll have to make sure you secure an alternate plan for your IDP lineup this week.

Jets LB Blake Cashman (hamstring) is active for today's game against the Dolphins. He has been out since Week 7 and entered the day questionable. Cashman could be ready to regain the starting spot that Harvey Langi has occupied recently. Cashman is tough to trust in IDP lineups right away, though. He has played just 3 total defensive snaps on the year.