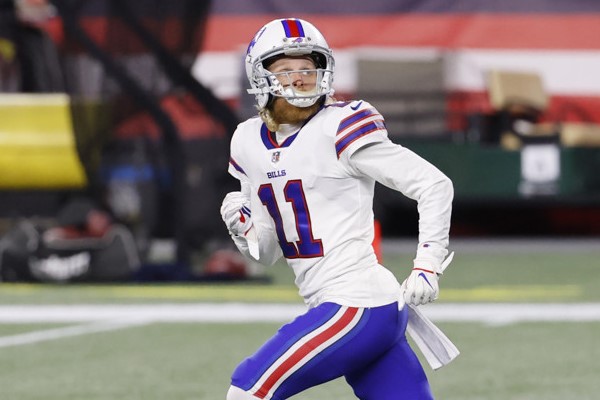 -Beasley’s low 4.8% TD rate fell in line with his career norm. He saw 11.7% of Buffalo’s RZ targets, putting him behind Stefon Diggs and Gabriel Davis and on par with Dawson Knox.

-After an enormous breakout season, some regression from Josh Allen is reasonable to expect. But Beasley will again man the slot and project favorably for another ~100 target season.

Beasley’s TD outlook remains unfavorable, but he enters year 3 with the same QB and coaching staff that’s quietly made him a spot-start option. There’s some decline risk at 32, but Beasley again profiles as a high floor, low ceiling fantasy option.

Bills WR Cole Beasley revealed that he broke his fibula in Week 16. He sat out the regular-season finale but returned for the playoffs, catching 7 of 11 targets in 2 games. “Take a few meds and suck it up," Beasley said. “There was no way I was gonna miss a playoff game.” It's unclear if he'll need surgery, but the injury shouldn't impact his 2021. Beasley has posted 67-778-6 and 82-967-4 lines in 2 years with the Bills, finishing 34th and then 27th among WRs in PPR points. He'll probably be undervalued again in 2021 fantasy drafts.

Bills WR Cole Beasley (knee) is listed as questionable for this weekend's Wild Card game vs. the Colts after returning to a limited practice on Thursday. We'll get his game status by noon ET on Saturday, but Beasley will be operating at less than 100% if active.

Bills WR Cole Beasley (knee) did not practice on Wednesday. He's considered week to week and is looking iffy for Saturday's game against the Colts. Buffalo at least got WR John Brown back last week and would also have WRs Gabriel Davis and Isaiah McKenzie behind Stefon Diggs this weekend

Beasley out for Week 17

Bills WR Cole Beasley (knee) is out for Sunday’s game vs. the Dolphins. We’ll see if he can make it back for Buffalo’s playoff opener.

Bills WR Cole Beasley is "week to week" with a "leg injury," HC Sean McDermott said Tuesday. We don't have any other details right now, but don't expect to see Beasley in Sunday's finale vs. the Dolphins. Buffalo might opt to rest starters in that game anyway. We'll see if Beasley can make it back for the Wild Card Round of the playoffs.