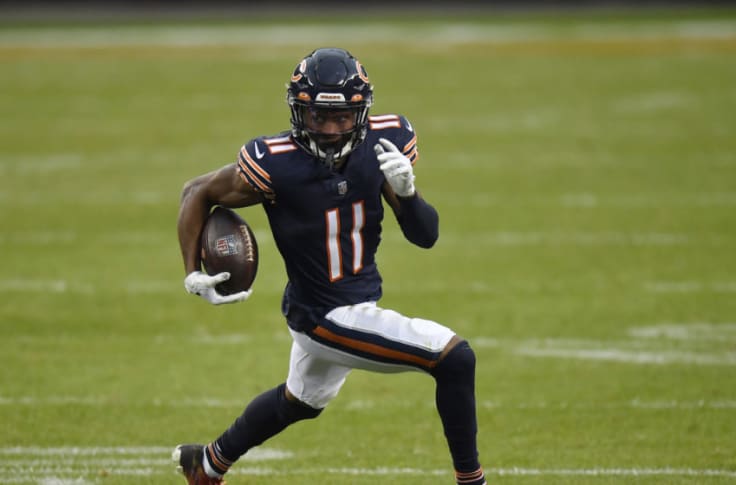 A 2020 Round 5 pick, Mooney’s quickly out-produced his draft stock.

Playing in all 33 games over the past 2 seasons, Mooney really broke out in ’21 with a WR24 PPR finish.

You could argue that boosted volume got him there. And it did.

But the 2022 Bears are setup to give Mooney another massive workload. If Justin Fields can take a step forward with a new and improved coaching staff, Mooney will be positioned for another WR2/WR3 season.

Bears HC Matt Eberflus confirmed on Monday that WR Darnell Mooney will miss the rest of the 2022 season with the left ankle injury he suffered in Sunday's loss to the Jets. We'll look for further details on Mooney's timetable to return, but he should at least be ready for 2023 training camp. Mooney finishes his 3rd NFL season with a 40-493-2 line on 61 targets. He's stretched as a #1 WR but can certainly be a quality #2 for the rebuilding Bears.

Bears WR Darnell Mooney "likely" needs season-ending surgery to repair torn ligaments in his ankle, according to NFL Network's Ian Rapoport. If that's the case, Chicago will be without the guy who drew 26.6% of the team's targets over the first 10 games of the season. It'd open up opportunity for WR Chase Claypool and TE Cole Kmet. But this will remain a low-volume passing game, so it's tough to get excited about any of the pass catchers. Even Mooney sat just 45th among WRs in PPR points through Week 11.

Bears WR Darnell Mooney hurt his left ankle in the 3rd quarter of Sunday's game vs. the Jets and is officially doubtful to return. We'll update his status when we know more.

Fox Sports' Jay Glazer reports that Bears QB Trevor Siemian took a pain-killing injection for his oblique injury and might still start vs. the Jets today. Both Siemian and QB Nathan Peterman took some 1st-team reps in final warmups. You should obviously be staying far away from this situation in fantasy lineups.

Mooney gobbled up 25.8% of Chicago targets in his 2nd season, leading the team by 47 looks, 21 receptions, 443 receiving yards and 1 TD. Allen Robinson's departure should keep Mooney locked in as the dominant lead target tied to what should be an improving young QB.