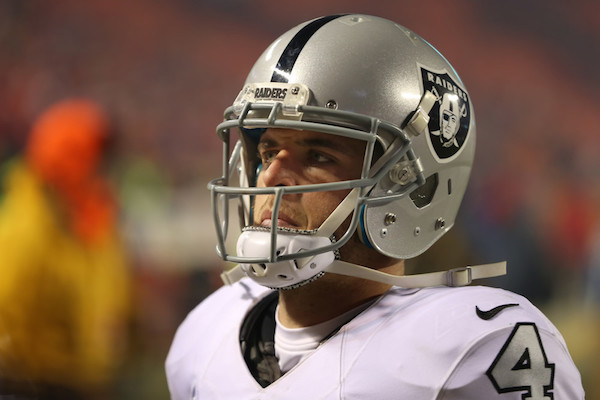 Carr is coming off a career high in passing yards and QB13 fantasy finish, despite a below-average TD rate.

That TD rate should rebound in 2022, especially with the arrival of WR Davante Adams. WR Hunter Renfrow and TE Darren Waller are also back, giving Carr the best group of weapons of his career. We’ll see what the offense looks like under new HC Josh McDaniels, but we’re expecting it to be pass leaning.

Carr’s lack of rushing ability caps the fantasy ceiling, but he has a good chance to provide at least low-end QB1 production this year.

According to Raiders beat writer Tashan Reed, the Raiders will hold “active competitions” for 4 starting O-line spots. That includes LG, C, RG and RT, with only Kolton Miller locked in at LT. This unit will be under the tutelage of OL coach Carmen Bricillo, formerly with HC Josh McDaniels in New England. The potentially high turnover here is worth monitoring for Derek Carr and the Vegas offense.

The Raiders and QB Derek Carr agreed to a 3-year, $121.5 million contract extension, according to NFL Network's Ian Rapoport. That makes Carr the league's 5th-highest-paid QB and keeps him in Vegas through the 2025 season. WR Davante Adams is signed through 2026. Carr has finished between QB13 and QB16 in each of the last 3 seasons and has upside beyond that in 2022.

Raiders HC Josh McDaniels said “there’s no doubt about it” when asked if QB Derek Carr will remain with Las Vegas for next season. "I really am excited about this opportunity to work together," McDaniels said. "I know what he's done. And I know what we might be able to do going forward together." McDaniels, speaking at the Combine, said that the team hasn’t yet opened extension talks with the veteran passer. Carr, 31, has often been floated as a potential trade chip in an offseason that's lacking even decent available starting QBs. He enters a contract year alongside the new HC and new GM Dave Ziegler.

Carr expected to get extension

The Raiders are prepared to give QB Derek Carr a contract extension that would keep him with the team beyond 2022, per NFL Network's Ian Rapoport. Carr has 1 year left on his current deal, but new HC Josh McDaniels and GM Dave Ziegler reportedly want to commit to him long term. And McDaniels was Carr's top choice for HC, according to Rapoport.

McDaniels to be Raiders HC

The Raiders are set to hire Josh McDaniels as their new HC, ESPN Adam Schefter reports. McDaniels has spent 13 of the past 16 seasons as New England's OC under Bill Belichick. In between his 2 stints with the Pats, McDaniels spent a little less than 2 years as Denver's HC. He went 8-8 in the 1st season and then 3-9 in the 2nd before getting fired after Week 13. We'll see if McDaniels fares better in his 2nd chance at a HC job.

Carr wasn't anything special as a fantasy passer in 2021, despite finishing 5th in attempts. 2022 is slated to be a contract year under new HC Josh McDaniels. We're thinking Carr will want to stick around after Vegas made a blockbuster trade for Davante Adams.