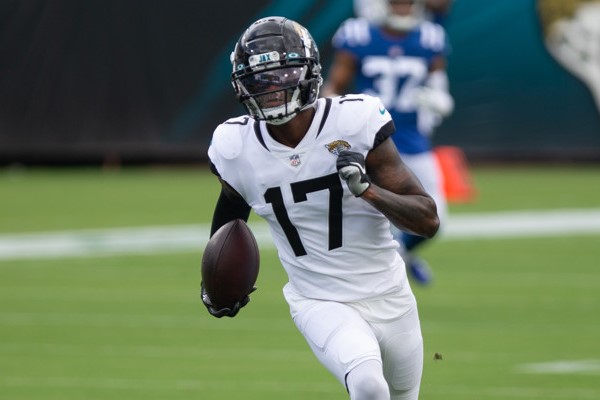 Volume could have propelled Chark to a high-end WR3 season last year. Maybe even better.

But a broken ankle squashed any chance of that scenario unfolding. Now, he’s tasked with learning a new offense with a new QB — and proving that ankle is back to pre-injury form.

Mix in the arrival of Jameson Williams and an overall deeper supporting cast, and Chark projects as an unlikely fantasy starter outside of deep leagues — especially once Williams’ knee rounds into form.

Lions WR Amon-Ra St. Brown racked up 122 yards and a TD on 9 catches to dominate Detroit receiving in the narrow loss to the Bills. WR Kalif Raymond and RB D'Andre Swift tied for 2nd on the team with 4 catches apiece. No other Detroit player exceeded 35 receiving yards. WR D.J. Chark caught the team's other TD pass, tallying 2 receptions for 16 yards in all.

Lions WR D.J. Chark (ankle) is officially active for today’s game vs. the Giants. It’s unclear how big a role he’ll play in his 1st action since Week 3, so Chark isn’t a recommended fantasy start today.

Lions WR D.J. Chark (ankle) has been activated from IR. That puts him on track to return for Sunday's game vs. the Giants. Chark has been out since Week 3 due to a setback with the fractured ankle he suffered in September of 2021. Chark tallied 18 targets over the first 3 games of the season but caught just 7 for 98 yards and 1 score. He might be worth an add in deeper fantasy leagues but shouldn't be in Week 11 lineups.

The Lions have designated WR D.J. Chark to return from IR. Shark hasn't played since Week 3 because of an ankle injury. The team now has 3 weeks to decide whether to return him to the active roster. We'll see how soon Chark actually gets back into the lineup, and we'll need to see at least 1 game from him before considering him for fantasy football lineups. Chark collected 7 catches for 96 yards across the 1st 3 games of the year.

Lions WR D.J. Chark (ankle) has been designated to return from IR. He's expected "to do a little bit" in Wednesday's practice, per insider Tim Twentyman. It doesn't sound like Chark will be ready to play vs. the Giants this weekend, but we'll monitor his progress.